The single is the rapper's most introspective offering to date. 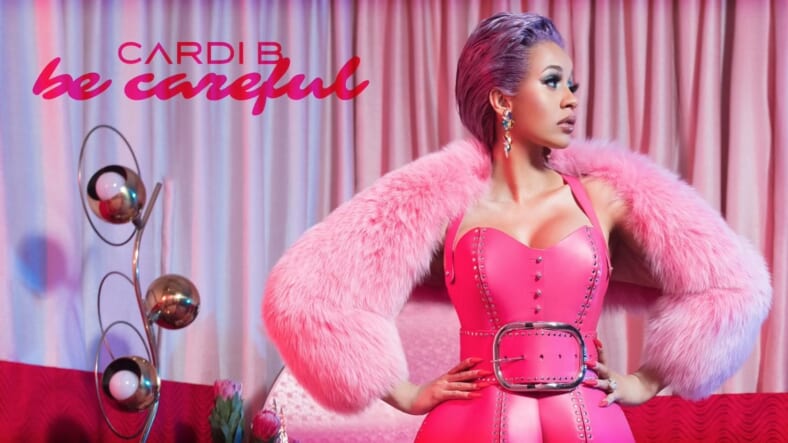 Cardi B is gearing up for the release of her debut album, Invasion of Privacy, and her latest track offers fans an inside look at her most intimate feelings.

The rapper known for dropping cocky verses and club tracks is more vulnerable than we have ever heard her on “Be Careful.” The track borrows from Lauryn Hill‘s 1998 hit, “Ex-Factor” and so the Grammy-winning artist is listed as a writer on the song.

On the track, Cardi B takes aim at her fiancee, Offset, who has reportedly been caught cheating more than once. While Cardi has previously made statements about standing by her man despite the controversy, it seems his wandering eyes have caused her tons of pain, proving her hard exterior is just a front for the same emotions any woman would feel after being betrayed and publicly humiliated.

Will Cardi B and Offset get a Vogue cover after making Anna Wintour smile?

Peep some of the lyrics that highlight her heartbreak:

“I wanna get married, like the Currys, Steph and Ayesha shit
But we more like Belly, Tommy and Keisha shit
Gave you TLC, you wanna creep and shit
Poured out my whole heart to a piece of shit
Man, I thought you would’ve learned your lesson
‘Bout likin’ pictures, not returnin’ texts
I guess it’s fine, man, I get the message
You still stutter after certain questions
You keep in contact with certain exes
Do you, though, trust me, n****, it’s cool, though
Said that you was workin’, but you’re out here chasin’ culo
And putas, chillin’ poolside, livin’ two lives…”

“I was here before all of this
Guess you actin’ out now, you got an audience
Tell me where your mind is, drop a pin, what’s the coordinates?
You might have a fortune, but you lose me, you still gon’ be misfortunate, n****
Tell me, this love’s got you this fucked up in the head
You want some random bitch up in your bed?
She don’t even know your middle name, watch her ’cause she might steal your chain
You don’t want someone who loves you instead? I guess not though
It’s blatant disrespect, you nothin’ like the n**** I met
Talk to me crazy and you quick to forget
You even got me trippin’, you got me lookin’ in the mirror different
Thinkin’ I’m flawed because you inconsistent
Between a rock and a hard place, the mud and the dirt
It’s gon’ hurt me to hate you, but lovin’ you’s worse
It all stops so abrupt, we start switchin’ it up
Teach me to be like you so I can not give a fuck
Free to mess with someone else, I wish these feelings could melt
‘Cause you don’t care about a thing except your mothafuckin’ self
You make me sick, n****”

While some critics are praising the song for its honesty, others are hating on the track.

28 seconds into "Be Careful" https://t.co/HExQTqg0zT

Peep the video and decide for yourself: