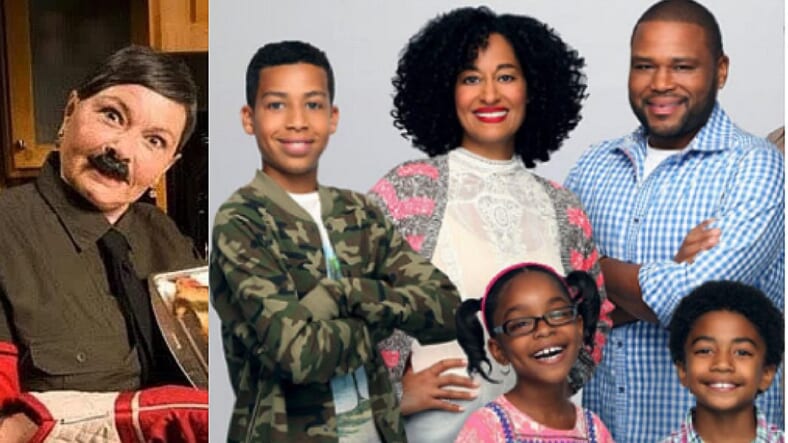 Just as Hollywood finally seems to be trying to get its shit together regarding women’s rights thanks to the #MeToo movement, it seems it still can’t figure out how to approach that pesky ol’ racism thing—even with a show like Black-ish on the air.

Do we really only have space for one social movement at a time?

That’s my question following reports surfacing on Wednesday that Kenya Barris, award-winning creator of Black-ish, is looking to exit his contract with ABC Studios. Everything is speculative right now, but it’s rumored the shakeup is a result of ongoing tensions between Barris and ABC execs related to ideas that the network has passed on.

Just a couple months ago, ABC permanently shelved an already-shot episode of Black-ish called “Please, Baby, Please,” in which the Johnson family addresses the controversy with Colin Kaepernick, the NFL and the National Anthem. Barris released a statement saying that they both opted not to air the show, but rumors abound that the network had its foot on Barris’ neck regarding the episode’s controversial topic.

We love Black-ish not only because it’s a throwback to topical and political black sitcoms of the 1990s (and a much-needed alternative to tired-ass early-aughts Tyler Perry shows), but because Barris has never been scared of going there with blackety-black shit that most network television would shy away from. Of course, everyone has a “there” limit, and when ABC still has relationships with the NFL, I’m guessing they want to endanger the bag only so much.

The whole thing smells bad considering that ABC had the presence of mind—in 2018—to consciously reboot 1990s Roseanne with an angle guaranteed to piss off a good portion of the network demographic that embraced ABC for its diverse representation. And the older, crustier Roseanne Conner is a Donald Trump supporter, just like her real-life alter ego, Roseanne Barr.

And hellogiggles and other sites published receipts sharing Barr’s horrifying Hitler humor that Snopes reports was created for a 2009 article in a “Germany” issue of Heeb magazine, a satirical Jewish publication that ran between 2001 and 2010.:

Hey @ABCNetwork, r u ok with @RoseanneOnABC dressing as Hitler for a photo shoot and also calling shooting survivor David Hogg a Nazi in a tweet that you made her delete? How low will you stoop for ratings? Do you have no shame? #BoycottABC #ABC #Roseanne pic.twitter.com/tcDkTeVRNl

And in the latest example of “Some jackwagon needs to be in the chow line for greenlighting this shit,” Roseanne took what many people perceive as a headshot at Black-ish and Fresh off the Boat in the recent episode, “Roseanne Gets the Chair:” After Roseanne and Dan wake up from an evening nap, Dan says, “We missed a lot of shows about Black and Asian families.”

Roseanne responds: “They’re just like us. Now you’re all caught up.” The aforementioned shows are on the same network, but tongue-in-cheek or nah, folks weren’t having the MAGA-ish humor knowing what they know.

I’m sure it reflects poorly on me that I wrote a relatively positive review of “Roseanne” and have generally stood by it, but tonight’s snide dismissal of “Fresh Off the Boat” and “black-ish” is probably my bridge too far.

“We missed all our shows about Black and Asian families.” No, you didn’t. They’ll be on starting at 9 with blackish and Black Lightning. #Roseanne

The whole dumpster fire with Barris, Black-ish and Barr’s grating ass is made even stickier by the fact that ABC is headed up by Channing Dungey, the first black woman to become president of a major broadcast network when she took the gig in early 2016. I’d love to think she had nothing to do with shutting down a Kaepernick-themed episode, but we all know that even the boss always has bosses.

Mind you, Barris himself will be just fine regardless of what he chooses to do: he’s got a bunch of projects in the works, including a WTF-inducing new Shaft film starring 137-year-old Samuel L. Jackson. Also, rolling over to Netflix is a win all around, considering the streaming service is murking everyone right now content-wise and recently courted boss show creators Shonda Rhimes and Ryan Murphy with checks the size of Alaska.

For you Black-ish fans, the show will likely stay at ABC even if Barris leaves…though I can’t promise it won’t end up like that last season of New York Undercover after they killed off Eddie Torres that everyone hated.

If it actually happens, we may never know the exact reason behind Barris’ departure from ABC. But if it has anything to do with shelving an episode that deals with an important issue pertaining to our treatment in America, it’s all the proof you need that cash still rules all. Hell, we live in a country where NRA dollars prevent Congress from moving on something that kills classrooms full of children—what’s one show with a bunch of Black folks trying to make a point?