Dear Black Men: You can’t defend Fabolous allegedly assaulting Emily B without accepting the fact that you’re an idiot 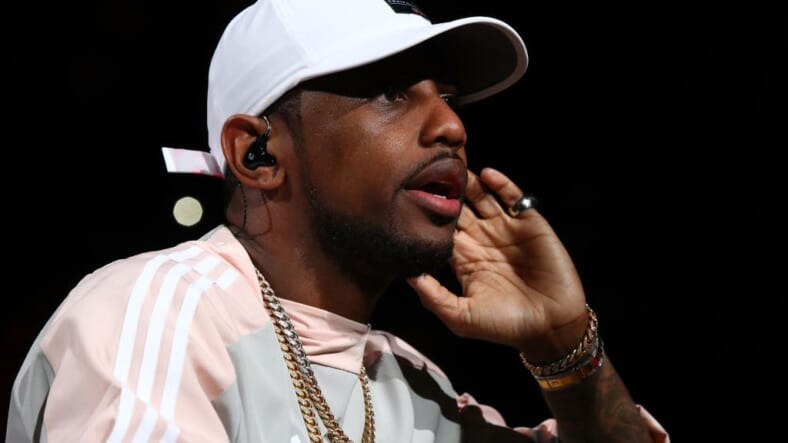 Rapper Fabolous performs during week one of the BIG3 three on three basketball league at Barclays Center in New York City. (Photo by Al Bello/Getty Images)

As a skinny, waffle-colored kid with no fashion sense or athletic ability who attended Detroit Public Schools, I grew up fighting. I won some and lost quite a few, but I never held back hands if someone wanted to throw them. That is, except for the two or three girls who squared up against me.

Like most men who weren’t raised in a commode, I was conditioned to never physically attack a member of the opposite sex, even if they hit first. For years, a rumor persisted that a particularly diminutive girl “beat me up” because I let her wail on me with my hands and arms in a defensive position. She caused nary a scratch, but for years it was “Dustin got beat up by a girl.”

Now, imagine what would have circulated had my ego provoked me to hit a girl half my size.

I knew better even as a damn child, which is why it blows me sideways whenever dudes evoke the full might of their GED to type, “Bro, what about what she did?” whenever a celebrity physically acts out of pocket with a woman. The latest incident involves waning rapper Fabolous and the domestic violence charges involving his longtime girlfriend and baby moms, “Emily B” Bustamante of Love and Hip-Hop fame.

Last week, Fab turned himself in to New Jersey police following an alleged assault against Bustamante. According to court documents, Fab punched her several times in the face, causing her to lose two front teeth. He apparently also threatened to crack her with a baseball bat and stated that he wanted to kill her, but “did not want to go out like that.”

Of course, there was a parade of “let’s hear both sides” ass clowns who wanted to know what Bustamante did to earn his ire. Because clearly, she had to be coming at him with a flame thrower to warrant getting teeth knocked in, right?

Things got deeper for Loso over the weekend when video surfaced of the incident that led to charges of aggravated assault and terrorist threats. Fabolous engaged in a heated argument with Bustamante and her father, who came to their home to remove guns from the house that Bustamante was afraid would be used against her. In the video, you can hear their children crying, Fab is being held back by his bodyguard and says, “I have a bullet with your name on it.”

I realize that we don’t have the full context for the video. But gun removal? Damaged teeth? Threats of shooting your children’s immediate family members? The shit played out like a day-one video they would show rookie police officers on how to handle domestic abusers.

But the video wasn’t enough for many gag-me-with-a-spoon-ass Negroes to avoid riddling Twitter and Instagram with paragraph-long defenses of Fabolous. They speculate that Bustamante is orchestrating all of this for money, wondering why she didn’t leave when she was getting beat and even insisting that they need to be convinced with videos and pictures of her injuries.

Even Hot 97 radio host Ebro is catching hell for tweeting something that looked like a defense of Fab:

If Fab punches Emily B in the face 7x as people are reporting wouldn’t he have gotten a battery charge too? Or nah?

I don’t advocate any violence in a relationship from either side. If that’s how you’re handling disputes, you need to hit up a counselor or part ways altogether. But it’s disingenuous and more than a little bitch-made to suggest that a grown man should respond to a woman’s physical attacks as he would if another grown man socks him in the face. My ex-wife is 5-foot-1 and maybe 108 pounds right after the biggest feast ever. On a couple occasions when she was truly angry with me, she’d ball her widdle fists up and bash them against my chest.

That wasn’t acceptable for her to do, but the true bitch move would’ve been for me – a full foot taller and 110 pounds heavier than her – to strike her back as a response. I can bench press 300 pounds, so I haven’t interacted with the woman I couldn’t restrain if she were trying to hurt me.

Fab is built like Captain America before the Super Serum, but he still has grown-man strength that shouldn’t be wielded toward a woman unless she’s coming at him with a weapon with an expressed intent to maim or kill.

If you wonder where you’ve encountered this cognitive dissonance before, it was nine years ago when Chris Brown threw fists at Rihanna in a vehicle. Even if Rihanna did swing on Brown first, there was precisely zero justification for him to use his full-ass man-strength to rearrange her face. But Brown apologists looking for a reason to keep listening to his music still ask, “But, what if Rihanna hit first?” Like, grow up, fam.

Come at me. I’ve got time. pic.twitter.com/QnQ3PlAbcQ

I assumed this incident with Fab would be the nail in the coffin of a man who hasn’t been hot the first year of the Iraq War. But dude received love at a New York concert Saturday night, after the video went viral. I’m not sure what made me think for a second that Fab would no longer be able to book a gig at Potbelly’s considering that R. Kelly and Brown have showed us that we shouldn’t let a lil’ ol’ thing like physical and sexual violence toward women get in the way of a booming career.

Reactions to Fabolous’ domestic violence bother me for all the obvious reasons but also because all of the defenses, all of the wait-and-see, all the two-sides defenses, were trotted out in 2009 for Chris Brown.

It just feels like we haven’t made progress in a decade.

Just know that if you’re out here caping for Fab with the information we have now, you’re probably trash and not to be trusted. And because I share genitalia with you fools, I feel obligated to explain #NotAllMen. It’s tiring…do better.