Exclusive: Reporter April Ryan on being the White House “whipping post” and why she can’t fix her face 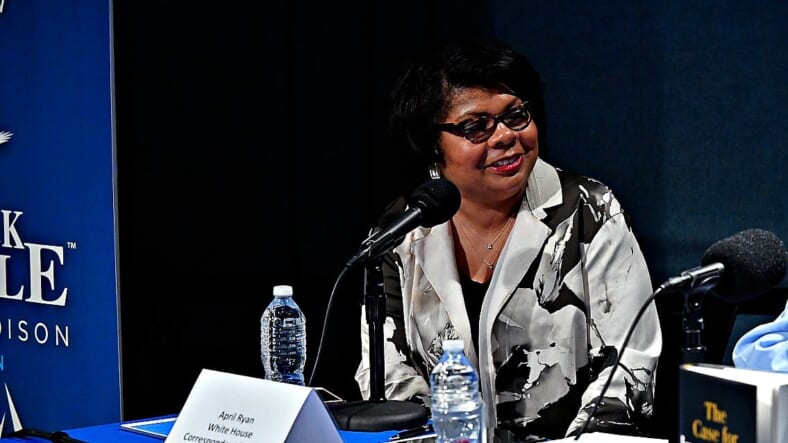 American Urban Radio Networks White House correspondent April Ryan has always had a hard time fixing her face. Especially in the middle of the Trump administration’s White House press briefings. A grimace here, a raised eyebrow there, lip twists galore—enough to earn her a cache of “Girl, what?” memes and gifs. And then there was the infamous head shake—the one that got her berated by former White House Press Secretary Sean Spicer last year. She wanted to know how the scandal-plagued Trump administration would repair its image. The legendarily derisive Spicer launched into a tirade about Russian dressing and agendas until, finally, he set about doing what the world does when it finds itself in the sightline of a Black woman’s gaze: he policed her body.

It was a demand that lurched the 20-year veteran political reporter directly into the national spotlight, with even Hilary Clinton coming to Ryan’s defense and the Black Twitterati launching an avalanche of commiseration with the #blackwomenatwork hashtag. Ryan, a divorced mom of two and a two-time author who has covered four presidential administrations, wanted only to retreat back into relative anonymity—where, she insists, journalists belong.

“I’m not supposed to be the story. I’m supposed to cover the story,” she told theGrio in an exclusive interview. “I am not the news.”

But in a whirl of “fake news,” anti-Black sentiment and a consistent attack on the safety nets that threaten to unravel the Black community’s most vulnerable, Ryan stands out—because she’s the most recognized of the small group of Black White House correspondents, because she sits in a seat of power in the third row from the front of the White House press briefings. Because she’s the only journalist there asking the questions that matter to those concerned about Black folk.

Here, Ryan breaks down the role of journalists in the era of Donald Trump, social media and the post-Obama whitewashing of the news cycle. What it feels like when you go from telling the story to being the story and oh, how a high-profile bachelorette with a predilection for Netflix and Chill meets hot guys.

theGrio: You were a DJ before you made the leap to news. Why politics?

April Ryan: My parents were always watching Walter Cronkite and listening to morning radio. We’d have it on in the car,  at home. I didn’t realize how much of an influence their engaging in current events really shaped me. Understanding how my community is affected, how I’m affected—that was big in my household. While I was a DJ, I knew I wanted something more. I wanted to be more engaged. And looking back on my life, I see why.

theGrio: News isn’t the same these days, particularly in this space and time, when anyone with a Twitter account and a camera phone thinks he’s a journalist.

April Ryan: You know, when I went to Morgan State, we had to learn how to work the big equipment. Now the big equipment is your cell phone. News is made that way. We should be trying to build these people to understand that news is not what you feel. The line has been obscured between facts and opinions, and social media makes us want instant gratification, so people are making mistakes—telling stories, catering them to certain groups. It’s not good. Tell the story. You don’t sway it or, or make it nuanced. Just tell the story. I grew up in the times when I heard Walter Cronkite say, “That’s the way it was.”  You never knew his politics until after he left. That’s the way it was and how it should be today. I don’t want to hear your political sway unless I’m looking for opinions. News has changed.

theGrio: Why do you seem to be the only one in the press corps willing to ask questions about Black matters?

April Ryan: I ask questions about all of America. I ask about Black America and I also ask about everything else: Russia, China, Iraq. But the Fergusons and the Baltimores, too. And I don’t say that I’m a Black journalist; I don’t say I’m a reporter asking Black questions. I’m a reporter asking questions that need to be asked. My job is to know what’s going on in the world. And a lot of times, unfortunately, they don’t cover the stories from my community outside of those crescendo moments.

READ MORE: There’s no way to defend Fabolous allegedly assaulting Emily B without accepting the fact that you’re an idiot

theGrio: Quite a few times since Trump took office, you’ve gone from covering the story to actually being the story.

April Ryan: I hate it. Honest to God. Once, you become the news, it takes a whole different slant. I am a reporter and they want to use me as a whipping post for the journalists—as an example. But, I don’t go down easily.

My life is at stake. I went to school for this and I’m not going to let people tear down my livelihood. I’m supporting two children—trying to send them to college.

theGrio: Your lack of a poker face doesn’t help matters.

April Ryan: Well here’s the thing: I don’t go in there to play for the camera. I literally go in there and see what will unfold with each moment because it’s always something new and different, whether you like it or not. And when you hear something that comes from the highest office in the land, the way it’s been given to us is like, “Oh.” It gives you pause. It’s like you’re in shock. I try and keep me face down, either in my notes or my phone so I won’t look like a fool.

theGrio: Have you always been that expressive?

April Ryan: I have—always. And my boss for the last 21 years is like, “I told you about that poker face! You’ve got to have it!” I’ve never played Poker, but I bluff in cards. I can bluff in War and Gin and Spades. I’ve never played Poker. I used to hear ‘You better fix your face’ as a child, and I told my daughter that just yesterday. It’s a blessing and a curse.

theGrio: Your schedule sounds insane. You’re a single mom of a 10- and 15-year-old, you lecture and you’ve written two books with a third on the way—all while holding down a powerful job. How do you avoid burnout?

April Ryan: I go lay down and watch Netflix. I’m serious. I’m so proud of myself; this weekend my children and I saw Black Panther and A Wrinkle in Time. I forced myself to have my quality time with them. And, as a divorced mother who dates every now and again, that’s hard to figure out—how to find time for myself without taking time from them.

theGrio: How do you meet men? Like, where’s your favorite place to meet them?

April Ryan: Oh my God! You meet men everywhere you go! Shoot, I had a dude come up at me in church. I’ve had guys pick me up at the grocery store. But I don’t do online. That’s a no for me. People have found their forever on online dating and I’m happy for them. But, if I’m on a blind date, my friends set it up and if I meet someone, it’s because they know someone that I know very well. I have to have a comfortability with someone before I go out with them. Why does everybody ask me about dating now? Oh my God!

theGrio: Because you’re a single, beautiful woman in the public eye—that’s why!

April Ryan: Aw, thank you! I am single and I can mingle. I like mingling. It’s fun.

I’m a divorced mother getting ready to send two kids to college. I made mistakes, but I’m excited about what life has in store right now. I don’t look at it as cup half empty. I look at it as half full and filling up every moment of the day. I like meeting new people, but it’s going to take a man who really understands my schedule and really has a heart for me and my kids for me to settle down again.

theGrio: How do you want people to view your work, your legacy?

April Ryan: You know, I’m not dying anytime soon. I don’t look at it like that anyway. I just do a job. I’d like people to remember that I’m somebody that worked hard and did her job to inform people. I want people to say that I worked hard to get the facts from all sides and to tell the stories that weren’t being told.