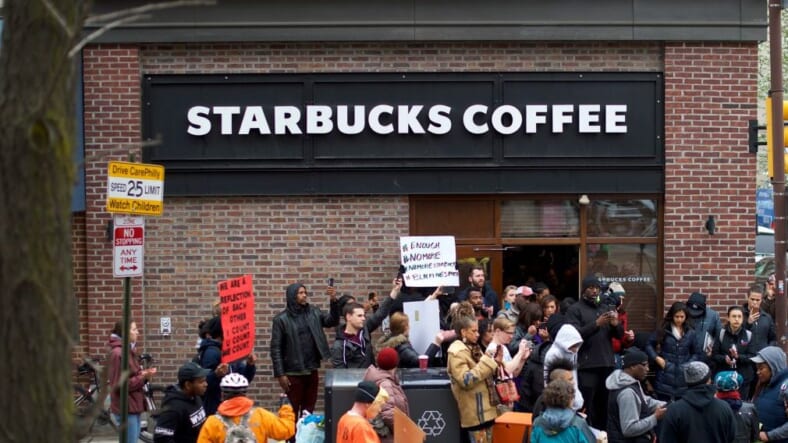 PHILADELPHIA, PA - APRIL 15: Protestors demonstrate outside a Center City Starbucks on April 15, 2018 in Philadelphia, Pennsylvania. Police arrested two black men who were waiting inside the Center City Starbucks which prompted an apology from the company's CEO. (Photo by Mark Makela/Getty Images)

Former Starbucks manager Holly Hylton, who called the cops and got two law abiding Black men arrested inside the coffee shop, is being called out by a former employee who says that Hylton’s a controlling racist who targeted and demoted Black employees, reports the Daily Mail.

Ieshaa Cash says last year Hylton was hired on as a manager at the 18th and Spruce Starbucks in Philadelphia and employees warned her that her new boss was “controlling, aggressive, and emotional.” That Starbucks location is under fire because that is where two Black men were arrested while sitting and waiting for a friend.

Cash said she was the only Black employee besides an assistant manager at the Starbucks and she soon felt the wrath of Hylton who cut her pay without explanation, had her demoted from a supervisory position, avoided dealing with Black customers and called the cops often on Black people.

“She always found a reason to kick Black people out, she was way more likely to ask them to leave over white people who hadn’t made a purchase,” she said.

And when it came to serving Black customers at the counter, she said Hylton would make them wait and tended attentively to white people first.

-After Starbucks arrest, Rashon Nelson and Dante Robinson, speak out “We want to see true change”-

“She was cold and standoffish to everyone else and would say “they can wait”,” explained Cash. “She often made the baristas serve them so she wouldn’t have to. Holly was very attentive with all the white customers, always making sure they were happy and served quickly,” she said.

It’s because of this type of racial bias against minorities that Starbucks is closing all 8,000 of its stores May 29 to conduct racial-bias education training geared toward preventing discrimination in their  stores, the company said in a statement.

The public outcry and protests were swift after two men, one identified as Omega Psi Phi Fraternity member Rashon Nelson, was hauled off to jail after the manager called the cops on them for sitting and waiting for a friend at the facility. A video of the incident went viral, causing online outrage and protests at the store.  Starbucks CEO Kevin Johnson  has met with the two men arrested to offer a face-to-face apology and he has vowed to implement new policies and procedures to prevent situations like this from occurring again.

Hylton no longer works at the Philly Starbucks in what has been called a “mutual decision” for her to part ways with the company.

Cash said Hylton made her job so difficult, writing her up for ordering extra coffee sleeves and “nit-picking” her every move that she decided to transfer to another Starbucks. But even that didn’t stop Hylton from coming for Cash.

She said Hylton called her into her office and had her demoted from supervisor to a barista. Cash said Hylton told her she was “not comfortable” with her remaining as a supervisor and with the demotion came a pay cut and an assignment to a new store.

When asked why, Cash said Hylton told her “’That’s the way I feel.”

“I’ve never been in trouble or disciplined and all the regular customers loved me,” Cash said.

The mom of three decided to ultimately quit. But she says she’s not surprised about the recent situation given Hylton’s controversial past.

“Holly was always very careful with what she said, but you could see her racism from the way she acted around people of color,” Cash said.