Brianna Bundick-Kelly is a freshman at Virginia State University. 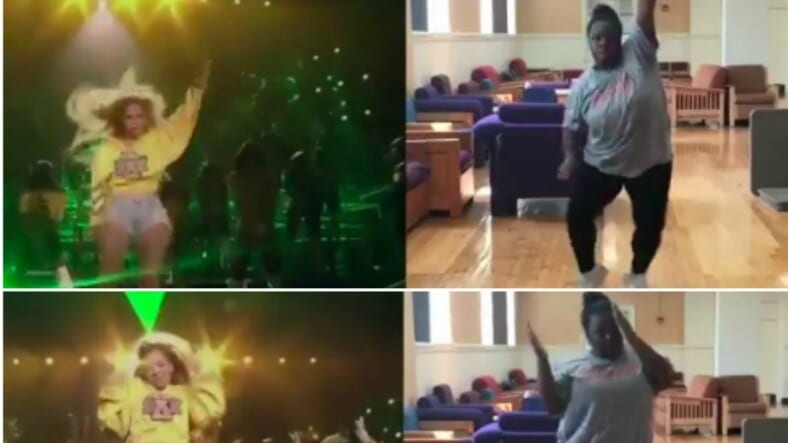 This young woman is obviously President of the BeyHive with masterful moves just like Beyoncé.

Brianna Bundick-Kelly (who goes by @imbriyonce on Twitter) posted a video recreating the choreography from Bey’s Coachella performance and her moves were so on point that the video went viral and caught the eye of stars like Gabrielle Union.

Union was so impressed by Kelly that she retweeted the video. No word if Beyoncé got wind of it as she prepares for her second Coachella performance this weekend.

The teen, who is a freshman at Virginia State University, says it took only 40 minutes to teach herself the difficult choreography. The result is flawless with Kelly looking like she could fall in line and dance alongside Bey and stay right on beat.

“You’d think with replicating other people choreography you have to be cookie cutter and look just like them but the power of teaching yourself something and putting your heart into is the fun of it all,” Kelly said in an interview with Insider.

“The views and likes are like a cherry on top.”

And Kelly has done it before. Back in 2016 she made a video of herself with scenes from Beyoncé’s Formation tour. Why so much dedication to dancing?

“I got involved with replicating dances out of boredom,” she explained. “I was literally sitting at home re-watching Beyoncé concerts and was like ‘Man I wanna do that… Wait I can do that… I’m going to do that!!’ and the rest is history.”

Kelly admits while she has never met Beyoncé, she takes great pride in learning her latest moves.

“My favorite part about doing these dances is that I can feel like I’m actually performing with the Queen herself without having to be there,” she said. “Don’t get me wrong, I would die to be on stage with Bey, but until that happens, I’m gonna keep dancing on the internet.”

What do you think? Should Beyonce give Kelly a call?

If you thought I was about to sit here, learn choreo & dance like I’m one of Beyoncé’s backup dancer… YOU’RE ABSOLUTELY RIGHT!????#BeyChella pic.twitter.com/157vovRFjG