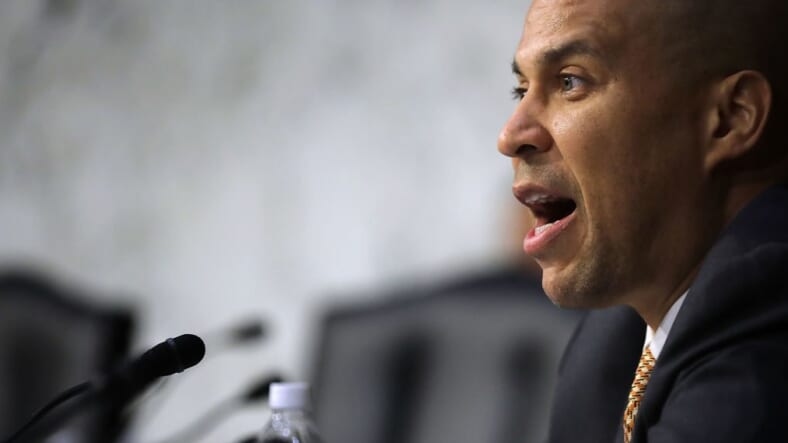 WASHINGTON, DC - MARCH 14: Senate Judiciary Committee member Sen. Cory Booker (D-NJ) questions witnesses during a hearing about the massacre at Marjory Stoneman Douglas High School in the Hart Senate Office Building on Capitol Hill March 14, 2018 in Washington, DC. Acting Deputy Director of the Federal Bureau of Investigation David Bowdich testified that the FBI could have and should have done more to stop the school shooter Nikolas Cruz after it receieved several tips about him. (Photo by Chip Somodevilla/Getty Images)

Senator Booker highlighted the impact African-American voters made on the election of the nation’s first Black president but also highlighted the challenges that arise when we don’t go to the polls in significant numbers.

He referenced the 2009 election of New Jersey governor Chris Christie, who was narrowly elected in 2009 after Booker says “nobody shows up to the polls.”

The senator then outlined the impact of low voter turnout saying that Christie cut tax credits and pulled out of environmental agreements. “Everybody wants to wonder, why are the Republicans doing this to us?” Booker then said: “We did it to ourselves.”

“I am tired of people allowing someone who preaches hate to turn us into haters. Someone who spews darkness to make us go dark. Someone who’s trying to divide make us attack other people,” said Booker in response to Gillibrand’s comments.

So could these comments shed any further light on whether Senator Corey Booker, or any of the other panelists in attendance, will run for president in 2020? NAN president Rev. Al Sharpton said, “They’re on what we call a temperature tour. They’re trying to test the temperature to see if they should announce.”

CORRECTION: The original version of this post incorrectly stated from source material from The Guardian that Senator Corey Booker blamed low African-American voter turnout for the election of Donald Trump when in fact he was referencing low overall voter turn out in the election of a Republican candidate in 2009 in New Jersey. The editors regret this error.