When is it ever just too much forgiveness? 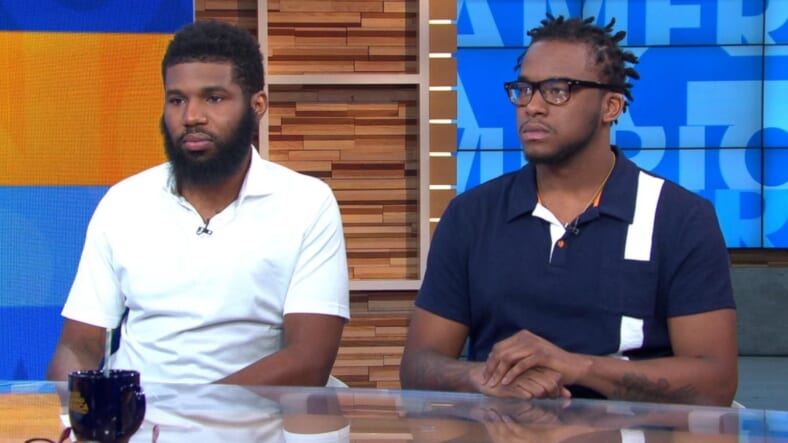 After weeks of making headlines and sparking national debate, the two Black men arrested for peacefully sitting at a Philadelphia Starbucks have finally made a settlement with the city.

Wednesday, Rashon Nelson and Donte Robinson agreed to receive a symbolic $1 each and the promise from officials to set up a $200,000 program for young entrepreneurs.

The mayor said Nelson and Robinson are the ones who approached the city about working together to “make something positive come of this.” The result being an entrepreneur program specifically created for Philadelphia public high school students.

Philly Mayor Jim Kenney praised the idea of creating a program saying pain from the incident would have repeated over and over again if these brothers took Starbucks, the city, and everyone else involved to court.

“Rather than spending time, money, and resources to engage in a potentially adversarial process, Rashon Nelson and Donte Robinson approached the city and invited us to partner with them in an attempt to make something positive come of this,” Kenney said in a statement. “This agreement is the result of those conversations, and I look forward to seeing the fruits of this effort in the coming months and years.”

“We thought long and hard about it and we feel like this is the best way to see that change that we want to see,” Robinson said. “It’s not a right-now thing that’s good for right now, but I feel like we will see the true change over time.”

Fam, I gotta be honest, this irks my spirit.

I understand these men care about the community, and want to work in the spirit of forgiveness, but we really gotta stop with this “turn the other cheek,” quick-to-forgive and play the martyr routine.

It’s getting old and our communities are too broke for these shenanigans.

READ MORE: No, Michelle Wolf isn’t Black, but after her savage takedown at White House Correspondents’ Dinner, we’ll trade Kanye for her in the racial draft

Had this been two white people, I’m inclined to believe that they would have negotiated a nice fat settlement AND asked the city to set up the program. There is no doubt that the brothers in question believe they’re doing the right thing by taking this route, but every single bone in my body disagrees.

I actually scrolled down the the press release scanning for where the rest of the money could be because I just knew that there was no way that any Black person, in 2018, in Trump’s America, would pull some overtly idealistic mess like this.

But alas, I stand corrected.

The city basically just got away with a baby-slap on the wrist and a wink from the CEO of Starbucks, while Nelson and Robinson walk away smiling with their hats in their hands.

When former First Lady of the United States Michelle Obama, famously said, “When they go low, we go high” I think some of ya’ll really took that cute, little quip a bit too literally. Even Michelle would have gotten her coins! We need to be a lot less Ghandi (who was a racist by the way – something I will never stop pointing out) and be a lot more Malcolm X.

READ MORE: Dear Black Men: You cannot and will not cancel Issa Rae for telling her truth

When the revolution comes, it probably will be televised and from the looks of things some of ya’ll are gonna be stuck doing a two-step with Kanye and his play brother Donald to show white folks how harmless you are.

After we did all that boycotting, it appears these brothers can’t even use their settlement money to buy something off the McDonald’s $1 menu, without coming out of their own pockets to pay the tax. God help them if they want a drink or apple pie on top of it.

And they definitely can’t afford anything from Starbucks.