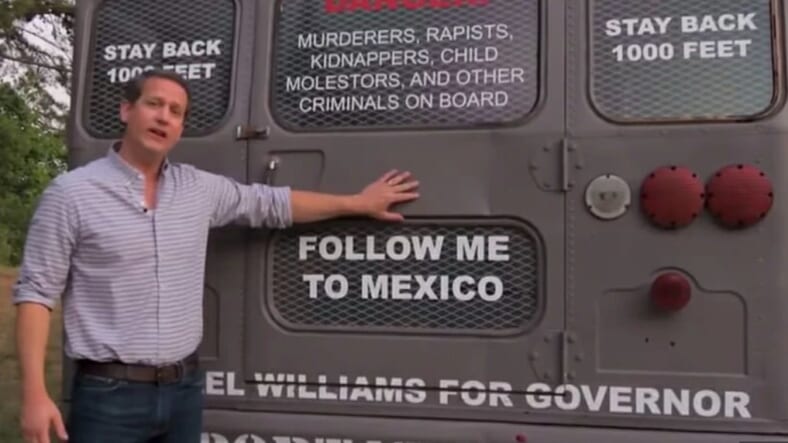 Georgia Senator Michael Williams had to put the brakes on his racist gubernatorial campaign on Wednesday after receiving pushback for its bigoted message.

Williams campaign made national headlines this week when he rolled out a “deportation bus” ad and a plan to ride around Georgia and campaign for votes. According to NPR, the side of the modified gray school bus is emblazoned with the words “Fill this bus with illegals.” The back reads,”Danger! Murderers, rapists, kidnappers, child molesters, and others on board.” And, “Follow me to Mexico.”

Vote Republican Michael Williams May 22nd -the only candidate for governor that endorsed Donald Trump – the others wouldn’t endorse him against Hillary! pic.twitter.com/fEATVD8GM4

The side of the offensive bus features a seal resembling the one from U.S. Department of Homeland Security and reads, “Michael Williams Deportation Bus.”

According to the AJC, Williams, a Trump-loving Republican who is running for Governor was scheduled to make a tour stop in Athens, Georgia but cancelled it after claiming that an earlier event in DeKalb County turned violent.

Hard-left liberals plot to harm myself, staff members, and the bus. Everything from death threats to throwing paint, fire-bombing the bus and more. These are the people protesting me for being “hateful”. #DeportationBus#FearlessConservative pic.twitter.com/MJ1O2aSpiG

—WATCH: Tichina Arnold and Cedric the Entertainer welcome white folks to the neighborhood in new sitcom—

In Clarkson, protestors reportedly surrounded the door of William’s bus as the controversial candidate did private interviews with the news media. The crowd chanted “No hate! No fear! Immigrants are welcome here.”

Williams spoke briefly to the crowd for less than five minutes, before getting back in the RV and following the bus to its next stop.

DeKalb County police dispute Michael Williams’ claims that there was any violence and issued a statement to the contrary saying they “did not observe any violence or criminal activity” at the peaceful event.

“Upon a police supervisor and officers arrival at the scene, they did not observe any violence or criminal activity. The DeKalb County Police Department reached out to Senator Williams’ campaign after learning of the media release.

“The DeKalb Police Department has not received a response from Senator Williams. If anyone encountered violence or any criminal activity at the site, the individual(s) is urged to immediately contact the DeKalb County Police Department,” the statement said.

And now the Williams’ campaign is getting push back from Cracker Barrel after he was scheduled to hold a rally at one of its restaurants.

The popular restaurant chain is now distancing itself from Williams prohibiting him from hosting his political event outside of its location and released a statement.

“At Cracker Barrel, we work hard to foster a culture that is welcoming and inclusive for our guests and employees, founded in mutual respect and equal treatment of all people. Cracker Barrel is not a political organization and has no party or political affiliation. Our focus is on delivering our mission of Pleasing People and serving everyone who walks through our doors with genuine hospitality, not politics.

“We are not sponsoring this event or supporting Mr. Williams’ campaign stops in any way, and per our company policy, we will not allow him – or any political candidate – to host an event on Cracker Barrel’s property. We take pride in showing our communities and our country that the hospitality we practice is indeed welcoming and inclusive to all.”