Black man racially profiled trying to return items to Hobby Lobby, even though he had a receipt 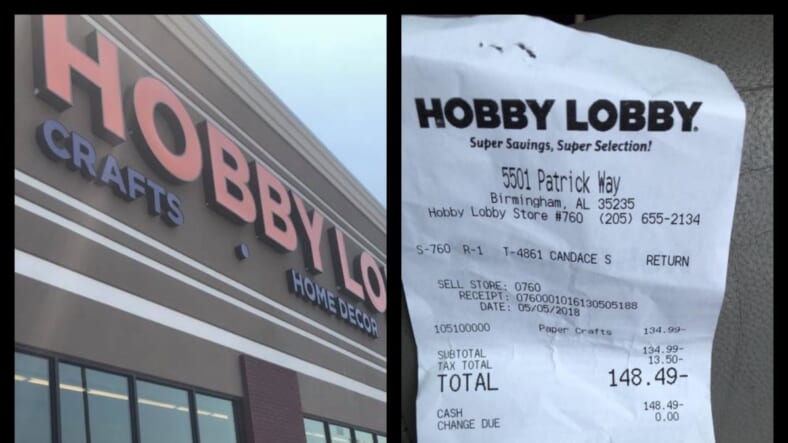 The Hobby Lobby in Alabama is under fire after a Birmingham man alleged he was racially profiled by an employee.

Tuesday, Brian Spurlock says he went to exchange several items purchased on May 5th at the Hobby Lobby in Trussville, Alabama. Despite having his receipt in hand and making the returns well within the store’s 90-day policy, Spurlock claims the manager refused to give him a refund on his most expensive purchase which was defective.

According to Spurlock, the manager denied the return because the item was opened. But during their disagreement the conversation took a sharp left, Trussville police were called to the store, and suddenly one of the managers accused him of looking like someone that’s been returning stolen goods to that location.

This was all done in spite of the fact that he had a receipt in his hands that blatantly proved he didn’t steal anything.

“Everybody do not steal. Everybody’s not out here killing people,” Spurlock told local station WVTM13. “Everybody’s not doing that. Y’all can’t just go off what somebody looks like.”

When police arrived they asked him for identification and after the officers took his ID back to their patrol vehicle, they returned a short time later and conceded the store needed to give Spurlock a full refund.

READ MORE: 5 Reasons why I don’t care about Meghan Markle and Prince Harry’s royal colonizer wedding and you shouldn’t either

“On May, 15, 2018 our dispatch office received a call from Hobby Lobby concerning someone in their store that they believed had written bad checks and made fraudulent returns to their store. Hobby Lobby was going trespass the person and wanted an officer there at the store.

When our officer arrived he spoke to an employee of Hobby Lobby and they explained the situation to him. Our officer spoke to the person and asked for his Identification. The person asked why and once the officer explained it to him he gave the officer a Alabama Identification Card. The officer ran the Id and it came back expired. Hobby Lobby did have a picture of the person that was writing bad checks and making fraudulent returns and it looked somewhat like the person in the store but it did not appear to be him.

The officer gave the person’s ID back to him and asked him if he had a driver’s license since he was driving and the person stated that he had a Georgia drivers license but did not have it on his person. The officer advised him not to drive his vehicle out of the parking lot without a valid license and the person called someone to come and pick him up.”