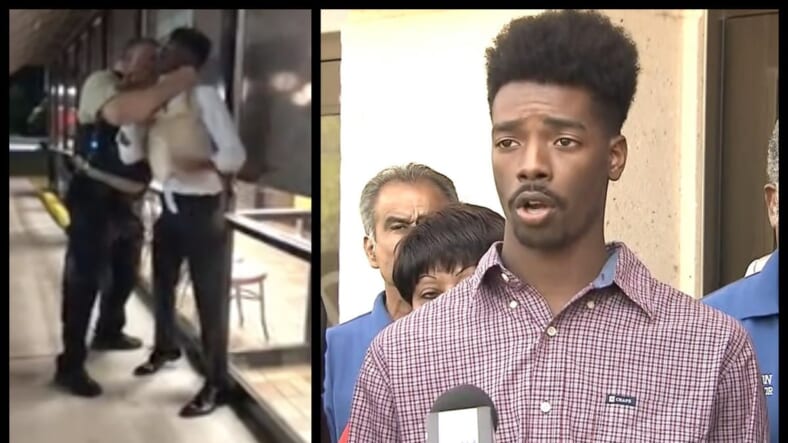 Anthony Wall doesn't seem to be receiving the same outpouring of support as other victims of Waffle House bias and discrimination.

Another day, another Waffle House situation.

This time involving a 22-year-old man named Anthony Wall. The incident which has since gone viral, displayed police officers using excessive force as he was choked and slammed to ground—following being called the N-word and a f**got by Waffle House employees.

Initially, there was outrage from the Black community as there was when Chikesia Clemons, who just a week prior, was also victimized by employees and police who slammed her to ground and exposed her breasts during arrest. However, the silence around Anthony is continuing to grow, leaving many to wonder if homophobia is once again rendering people’s decision to stand with a Black man deserving of the same support.

When I first notice that I hadn’t seen as much coverage with Anthony, I read a story that confirmed he is indeed a gay Black man. Instantly, I went to Twitter to sound off about the silence from many segments of the Black activism community, who have seemingly been less concerned or propelled to find justice in this situation, unlike that of Chikesia.

Also notice the silence of silence many pro-black folks once they found out the victim was gay.

Y’all tell on yourselves every time. https://t.co/6uK00VOTHb

Reading the comments confirmed much of what I feared.  Several agreed that one, they hadn’t really heard about the story, and two, that it appears that homophobia has played a role in the way many have decided to respond…or prompted them to stay silent. There was even commentary about how Anthony potentially played a role in the situation that escalated between himself, the Waffle House employees and the Warsaw, NC police. A statement that we rarely use when discussing hetero police harrasement and violence.

Imagine if we said Eric Garner shouldn’t have been illegally selling cigarettes or that Tamir Rice shouldn’t have been playing with a toy gun or that Mike Brown shouldn’t have been J-walking. The Black community would never allow the “they brought it on themselves” narrative to thrive because we know when dealing with Black interactions with police, right, wrong or indifferent, we will always be at a disadvantage in attempting to achieve justice.

One must also take note that this is a pattern of behavior noticed when violence happens against Black queer people, whether it be physical or civil rights oriented. Over the past year we have had issues with state laws blocking queer sex education, blocking the ability for us to adopt, and still allowing people to use the “gay panic” defense.

Federally, we have dealt with the removal of our status on the Census, the removal of housing programs from HUD, and the biggest of all, reversal of Transgender people serving in the military. These issues, which affect all Black queer folks, are often ignored by the Black community at large and receive less coverage than those issues affecting Black hetero people.

Our biggest concern continues to be issues of safety because queer folk are being murdered every day and our inability to address this fact with as much fervor and anger is hurting us as a whole.

This weekend, two Black trans women were murdered in Dallas, TX—only making local news. I myself was only alerted to the string of violence happening in the Dallas community by a family member who lives there who felt the story needed to be amplified. Transgender murders are often overlooked by major media publications and it’s a struggle to get those in the community who claim to be pro-Black to make a concerted effort to protect our population.

READ MORE: White woman tried to colonize Donald Glovers’ ‘This is America’ and it’s everything wrong with white feminism

We must do better.

I’m 32 years old, which means, I am now one-year older than the life expectancy of a the average Black trans woman—which now ranges between 31 and 35. We have to break the homophobia and transphobia that permeates our homes, schools, churches, and workplaces if we truly want to see our people liberated.

None of us are free unless all of us are free. Anthony Wall deserves our best, and his sexuality shouldn’t hinder him being a Black life that matters.