WATCH: Racist NYC lawyer and Oakland BBQ Becky show how “educated” folks can be racist too 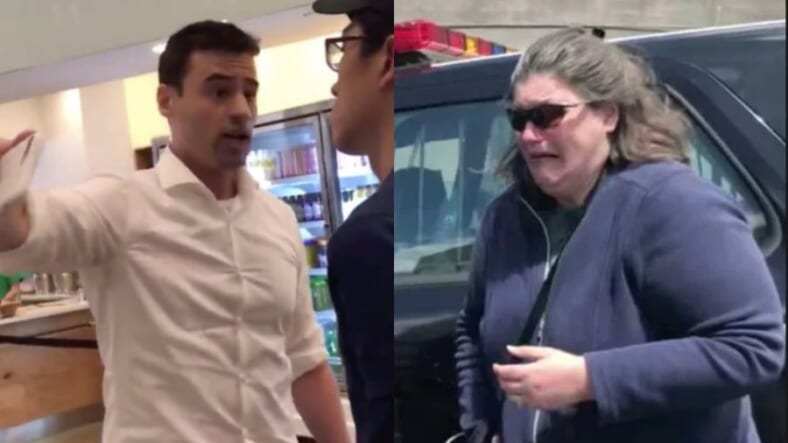 Colonizers have a lot of audacity these days.

The latest incident of racism gone viral happened in New York City, when lawyer and Trump-supporter Aaron Schlossberg had a major meltdown over two restaurant workers speaking to each other in Spanish.

After accusing them on being on welfare, threatening to call ICE agents and telling them to get out of “his country,” Schlossberg tosses an insult about a woman’s weight in, just to show he’s an all-around jerk.

TheGrio‘s Natasha Alford took to Cheddar Live today to talk about what the incident represents and Donald Trump’s referring to some immigrants as “animals,” reflect a sad state in America.

“Listen to the inhumane way he talks to these employees- he says ‘you’re on welfare’ ‘you’re in my country’- all of this because they are speaking Spanish.  Let me disabuse anyone of the notion that somehow Spanish is a ‘new’ language that just came to this country with a new wave of immigrants.”

“Spanish has been around… It is the second most spoken language in this country, and a lot of people don’t know that English is not actually the official language of the United States.”

That’s right.  Hold on to your MAGA hats, bigots. The U.S. has no official federal language, although more than half of the 50 states have identified English as an official language or one of multiple official languages.

When asked whether we should be surprised a racist incident like this happened in Manhattan, Alford broke it down like this:

“When Dr. Martin Luther King was being an activist he encountered some of the greatest racism in Chicago and in the North.  So let’s not be confused about the history of this country or the fact that racism does exist everywhere.”

“A lot of people have this stereotype of a poor ignorant person that discriminates, but educated people can be racists too. And we saw this with the woman who called police on African-American BBQers [in Oakland]- she went to Stanford University.”

“So we need to have these conversations that go beyond stereotypes and really challenge the things that make people feel so threatened by people of color.”