How Black folks turn white tears into a cultural event, with extra sauce

Don't tell us where we can't barbecue, because that will bring hundreds of us...just ask Oakland 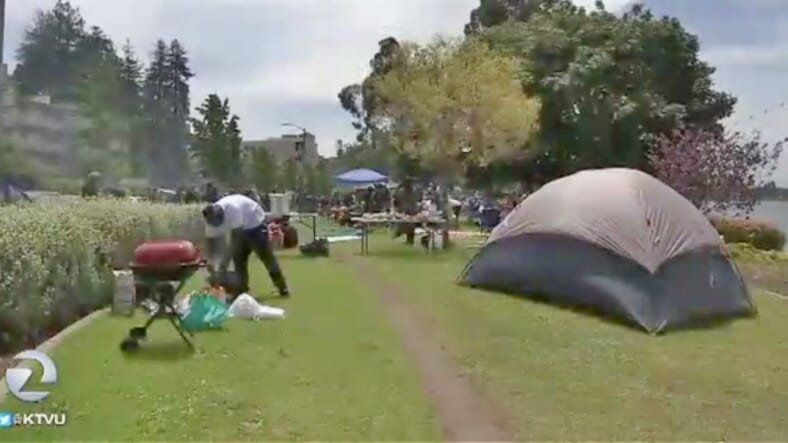 On Sunday, Oakland residents fired up the barbecue grill in the park again, except this time the epic “BBQing While Black” event drew more than 1,500 participants in a bold response after a white woman called the police of an unsuspecting family who were grilling out at Lake Merritt, reports the East Bay Times.

Racks of ribs, hot dogs and hamburgers were served up along with a dose of karma after Jennifer Shulte, the woman at the center of the controversy, brought on herself.

READ MORE: Another #DrivingWhileBlack incident in Kansas, but this time over ‘vegetation’

The overzealous white woman drew heavy backlash on social media after calling the cops on a Black man who was barbecuing in the park with his family. After the video went viral, hundreds of Oakland residents held a huge family reunion style party in the park in a show of solidarity.

This time, the event brought even more and had the approving nod of firefighters who waved and smiled and police officers who assisted with directing traffic.

“This is about doing what we’ve already been doing and eat in peace, literally,” said Logan Cortez, one of the event’s organizers. “We’re not fighting for our rights; it’s already our right to do this.”

Oakland resident Onsayo Abram was the man being harassed by the woman as he was setting up his barbecue grill.

He came back to participate in the “BBQing While Black” event.

“I was born here. She was trying to tell where I don’t belong, but at the same time, I wasn’t trying to feed into her negativity.”

The situation has prompted action by Oakland activists who converged on City Hall to demand the arrest of Shute.

Before police entered the area, she said she was concerned because the family was using a charcoal grill in an area that was for propane grills only. When police officers arrived, she cried and said she was being harassed.

But her behavior did little more than spur the #BBQBecky hashtage and launched internet memes that included her calling the police of famous figures like Dr. Martin Luther King Jr. and Rosa Parks.