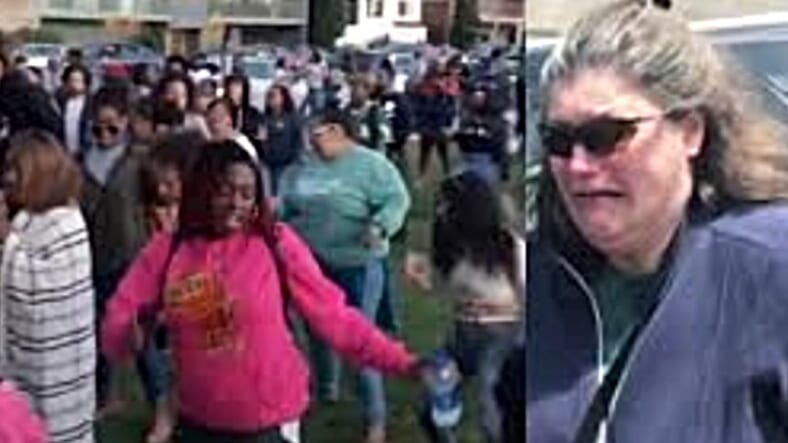 The white racist woman who drew ire on social media for calling the cops on a black man who was barbecuing in the park, did NOT get invited to the cookout after hundreds of Oakland residents held a huge party in the park in response incident that went viral on social media.

Talk about an epic revenge.

Doing the electric slide and all, residents protested and played classic jams like BBD’s “Poison” and girls could be seen jumping Double Dutch in the background, reports the Atlanta Black Star.

The other day in Oakland, a white supremacist female called the police on a group of Black ppl BBQing in the park. So in response, the whole town of Oakland came to the park and said “F you” in the form of the Electric Slide ✊? #townbusiness #lol pic.twitter.com/c4azBJwDrp

It had all the remnants of an old-school block party which was clearly meant to be a slap in the face to the woman who had an issue with just one black family being there.

Last week, a white woman caught an angry white woman on video berating a black man who was minding his business and using a grill to barbecue at Lake Merritt Park in Oakland. The woman threatened to call the police—and did. But when the police arrived they refused to interfere and said the man was within his rights. The white woman then started crying, acting as if she was instead being harassed.

The woman became the butt of jokes all over social media with memes that her calling the police on the dancers on Soul Train, Rosa Parks and even Martin Luther King Jr.

The other white lady who recorded the video immediately saw that it was problematic and said: “This is exactly what is the problem with Oakland today. This lady wants to sit here and call the police on them for having a barbecue at the lake as if this is not normal.”

“When you engage law enforcement in these kinds of things you are opening the door for things to go very wrong, the potential for arrests like in Philadelphia with those two black men or worse physical assault or death and I don’t believe in this day and age that white folks don’t know that.”

The barbecue that Started it all

Oakland resident Onsayo Abram says he was setting up the barbecue that morning when a random woman began to argue with him over the use of the grill. Abram claims the woman called Lake Merritt “my park” and told him, “you guys shouldn’t be here.”

—Against the odds: 3 black doctors detail journey to success—

“She walked up, and she was telling me that it was illegal and against the law to have a charcoal grill at the lake,” Abram told SFGATE. “I proceed to tell her, ‘Hey, there’s not a posted sign. I believe I’m in the correct area. Go on about your day and leave me alone.’ So she said, ‘No, I’m not gonna leave you alone. I’m gonna need you to shut this down, or I’m gonna call the police.’

This is when Michelle Snider came onto the scene and quickly assessed that something was amiss with the way the woman was hyper-focusing on Abram and their group.

“This is exactly what is the problem with Oakland today,” Snider said. “This lady wants to sit here and call the police on them for having a barbecue at the lake as if this is not normal.”

When Snider, who is white, confronts the women for racial profiling, she is told that charcoal grills are “illegal” in that part of the park, and threatens the Black family with jail.

The rest of the clip is a glorious example of what happens when a true ally is sick and tired of seeing another white person cry wolf. Snider proverbially sinks her teeth into this woman and goes in on this woman as she records their interactions for over twenty minutes.