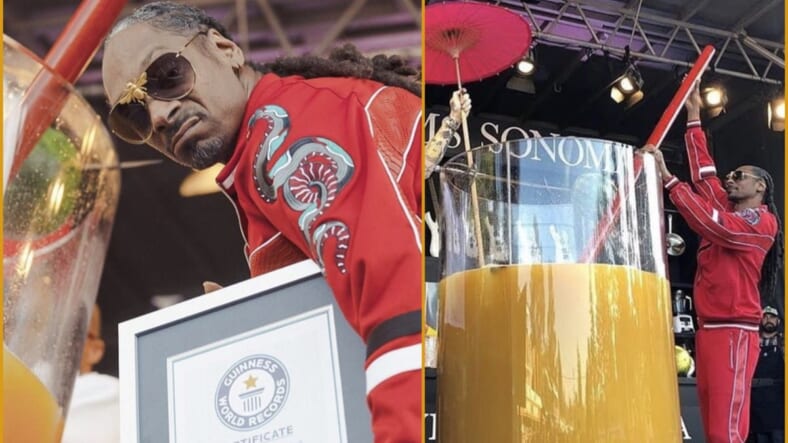 Snoop Dogg is laid back with his eyes on more than his money these days after breaking a Guinness World Book record for mixing the largest Gin and Juice cocktail ever at the BottleRock Napa Valley festival this past weekend.

And to make history, his homie Warren G, along with Top Chef’s Michael Voltaggio, Kim Kaechele and Randall Coleman helped create the drink for Snoop, which earned the honor of becoming the “largest paradise cocktail” on record, reports Complex.

The epic Gin and Juice cocktail contained roughly 145 gallons of liquid. and Snoop was awarded a official certificate of achievement for the massive concoction while on stage.

READ MORE: Thief sues for $2.7 million after being shot while robbing liquor store

Snoop wasn’t just at the festival to pull off the stunt; he was there to perform as well, ensuring that he is always about his coins.

The fund was created to invest in cannabis startups like the “Green House” company, which was co-founded by Ted Chung and Evan Eneman, two executives from the talent agency Stampede Management.

Snoop’s introduction to investing was reported by Forbes in 2015, when he invested in the free stock trading platform, Robinhood. A month later, the two invested in the social media powerhouse Reddit, which has become a huge media asset.

Although he is largely seen as the public face of the firm, Snoop looks to his partners to create the important next moves.

As far as Snoop’s involvement, his managing partner Karan Wadhera  revealed that his most hand-on activity is with Merry Jane, a lifestyle media website focused around cannabis, that has puffed up (pun intended) in recent years.

“He mainly handles the financial modeling,” he continued. “He’s among the most important cultural figures in this industry, which is incredibly important. His involvement lends a lot of credibility and excitement to our portfolio companies. He’s also there for input whenever we need it.

Check out video from the big event at the BottleRock Napa Valley festival.

All hands on deck. ? @snoopdogg @mvoltaggio @warreng set the record for world’s largest Gin & Juice (The Paradise ? cocktail). Only on the #WSCULINARYSTAGE. Watch more in our IG LIVE. ? #guinnessworldrecord #BottleRock