5 Reasons you have to run, not walk, to the new “Watching Oprah” Smithsonian exhibit 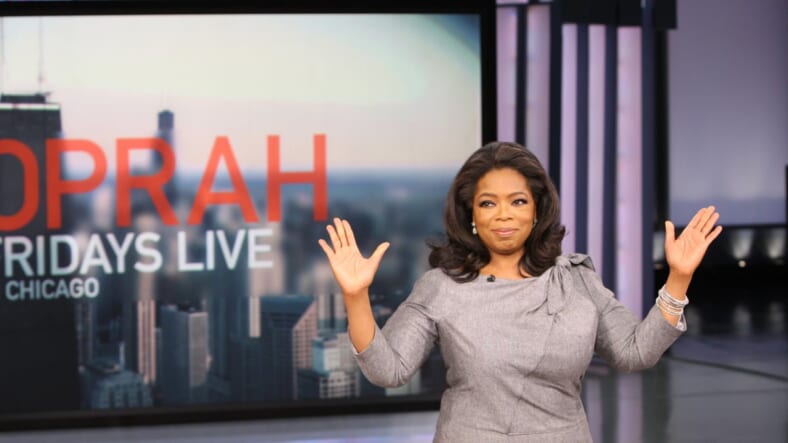 This Friday, the Smithsonian’s National Museum of African American History and Culture will be unveiling “Watching Oprah,” a year long exhibit that unpacks how this country shaped Oprah Winfrey and how she ultimately had a major hand in helping to shape America.

Winfrey was a social influencer well before Instagram and Twitter made that a monetized aspiration, and now she’s finally getting her well deserved and long overdue recognition as not just a media mogul, but also as part of American history.

Several journalists were provided with a preview of the exhibit and theGrio was on hand to discover all that it has to offer. If you’re planning to make the trip to Washington D.C., here are five reasons why you need to add this exhibit to your must-see list this summer.

Timely reminder of this country’s unsavory past 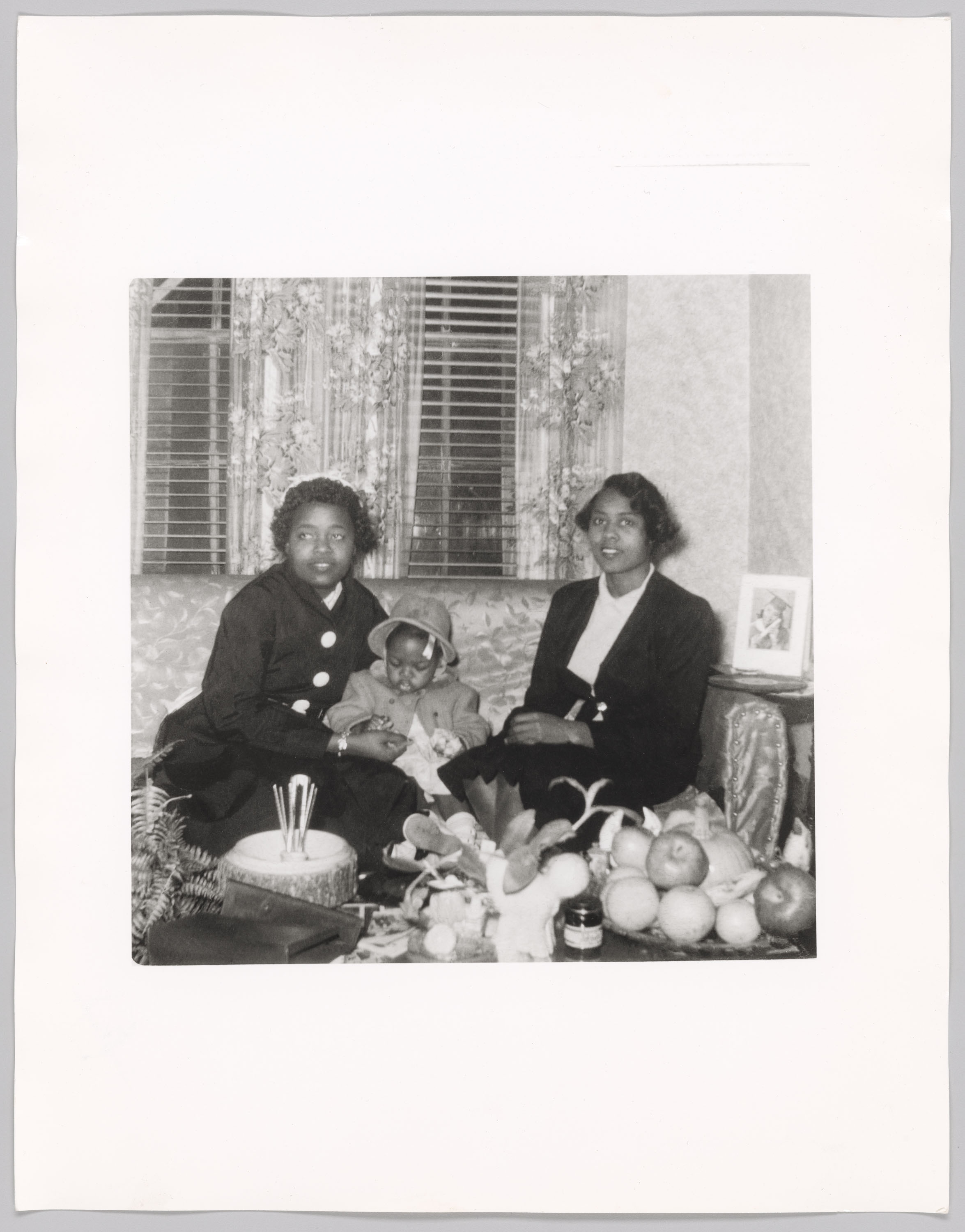 Oprah Winfrey with her mother, Vernita Lee (left), andher aunt Christine at her grandmother’s house, ca. 1955 (Courtesy of Jermaine House/Smithsonian and on loan from HARPO, Inc.)

Oprah was born in 1954 and grew up during the height of the Jim Crow era. Her front row seat to the major transitions this country went through politically is part of the reason why she, as a Black woman, was particularly well suited to demand her audience view the world through a lens of heightened compassion and awareness.

While a woman of color has yet to lead us in the White House, Oprah arguably had just as much of an influence by speaking to us five days a week through our television screens. Which is why the team at the Smithsonian went all out to make this sure this exhibit not only celebrated Lady O but also explained what her story means in the greater context of African-American history.

“This exhibit examines the power of television,” said Lonnie G. Bunch III, the museum’s founding director. “Just as Oprah Winfrey watched TV coverage of the civil rights movement and was shaped by the era in which she was born and raised, she has to on to a have a profound effect on how Americans view themselves and each other in the tumultuous decades that followed.”

Concrete example of how to become ‘The American Dream’

Advertisement for Eyewitness News at 10, 1975 (Collection of the Smithsonian National Museum of African American History and Culture)

There’s no doubt that Oprah is the living embodiment of the American dream and the exhibit very thoughtfully takes away the mystique of her celebrity, instead showing visitors the tangible steps she took to build her empire.

‘Watching Oprah’ is cut up in 3 segments:

When applauded for her achievements, Winfrey often quotes her mentor Maya Angelou by saying, “‘I come as one, but I stand as 10,000.”

And the curators point out that even though she may solely hold the distinction of being the first African-American woman to become a billionaire, she got there by focusing on causes bigger than herself.

“Oprah knows her audience and cares about her audience,” explains Bunch. “There’s this sense that she’s never just going through the motions. The issues she raises are the issues that she feels are important to both her and the audience. And people began to see that for years Oprah was really not pushing herself, but instead pushing the issues that the audience – and America – needed to explore. People began to see her as someone they could count on. And for me this is fascinating, the notion that this trusted person is also an African-American woman. That in itself is very powerful and very meaningful.” 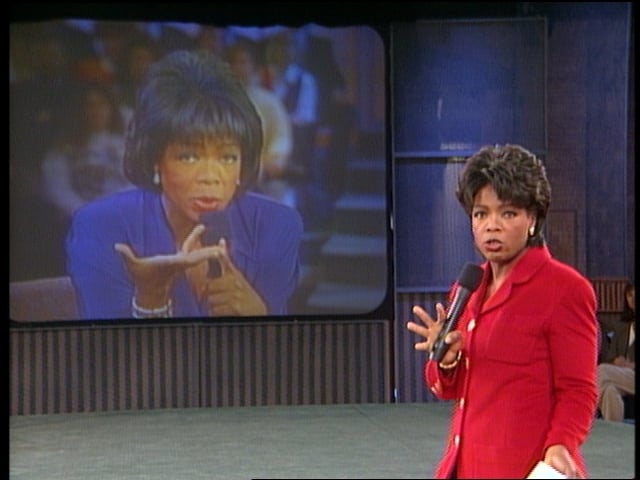 Oprah won the Daytime Emmy Award for Outstanding Talk/ServiceShow Host (1986-1987) (Courtesy of Jermaine House/Smithsonian and on loan from HARPO, Inc.)

Speaking of issues that affect us all, I’d be remiss if I didn’t point out that before there was #BlackLivesMatter or #MeToo, there was Oprah Winfrey.

She made audiences face uncomfortable social justice issues well before it was the norm, and has always been a champion for marginalized people despite her huge popularity with white audiences.

Which is why a number of scholars from all over the country were consulted and contributed to this exhibit, particularly those with expertise in power, social justice, religion, gender and media studies.

The Oprah Winfrey Show dominated daytime TV for 1986 – 2011 and was watched by millions in 145 countries, ultimately winning 48 Daytime Emmy Awards. During that impressive run, in addition to social justice issues viewers were also able to get really honest about formerly taboo personal topics like self-image and sexual orientation.

Her ability to humanize those who were often seen as “other” and change the tide of public sentiment created a phenom called ‘The Oprah Effect.’

This undeniable influence changed people’s lives and has long been a subject of fascination and heated debate about whose voices deserve to be heard and whose perspectives and experience matter.

Now more than ever we find ourselves grappling with those very same questions, which is why if you’re part of the “woke” contingent, you should definitely show up to this exhibit ready to take notes on how to make your message reach the masses. 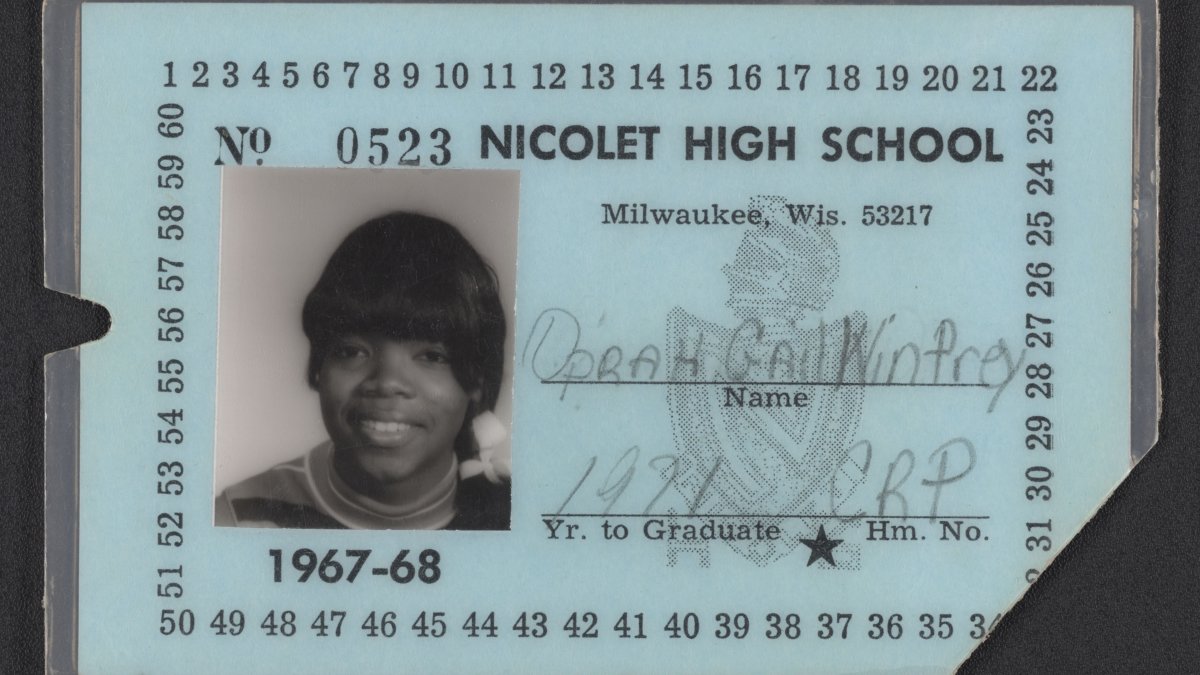 Oprah Winfrey’s ID card from Nicolet High School in Milwaukee, WI with her own signature.  (Courtesy of Jermaine House/Smithsonian and on loan from HARPO, Inc.)

Aside from all the historical context and cool ‘Flashback Friday’ worthy photos from Lady O’s golden years, the exhibit also has some personal touches that will definitely pull at your heart strings.

“We wanted to get to Harpo Studios before it was no longer,” said curator Rhea L. Combs. “We identified specific objects that would really tell the important story of a quarter century of a cultural phenomenon.”

Included in the show is Oprah’s actual desk from Harpo Studios, where she kept pictures of her grandmother and longtime beau, Stedman Graham placed front and center at all times while she plotted world domination. On the desk are also some Jim Crow era figurines (no doubt a reminder of her childhood) and a magnifying glass to help her read fine print. Not to mention all her Emmys proudly displayed behind her chair.

And if you’re into fashion, there’s even an extensive collection of Ms. Winfrey’s infamous outfits from an expansive wardrobe including ensembles from awards shows, The Color Purple, and her star studded series finale.

It is those sorts of personal items that allow you to almost slip into Winfrey’s shoes and imagine what she must have felt like day after day, knowing that the whole nation (and one could argue – much of the world), was waiting to see what she would come up with next.

It’s an objective look at the woman behind the brand 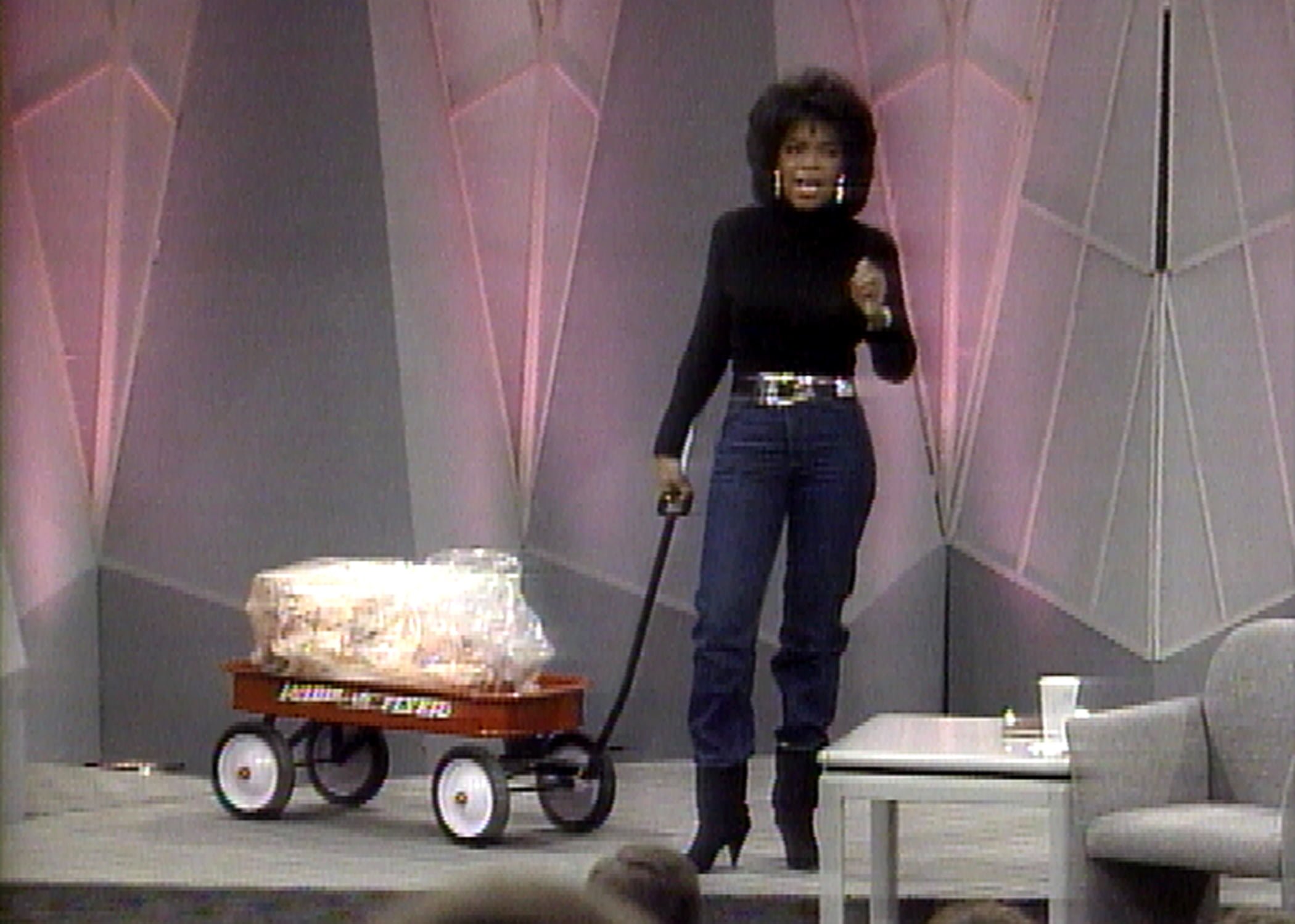 The Calvin Klein jeans Oprah Winfrey wore during this weight loss episode in 1988 are now on display at the Smithsonian. (Courtesy of Jermaine House/Smithsonian and on loan from HARPO, Inc.)

One would think that since she donated $21 million dollars to the museum there might be some bias or conflict of interest with how Oprah is presented.

Think again. When speaking to the press, Bunch made it clear his team had complete control over this undertaking and were able to tell her story in a way that speaks to the African-American experience as a whole.

“We wanted to make sure that Oprah’s producers and staff helped us with fact checks and made sure we got that part right. But the reality is we drew a very hard line to say that this was not a show done for Oprah or by Oprah. It’s a show that wrestles with broader questions and uses Oprah as a lens to get at that. But there was very little of Oprah’s fingerprints at all on the exhibition.”

In fact, Winfrey has been so hands off she has yet to see what they came up with, but plans to visit the Smithsonian sometime this week. After what we saw, we’re certain she’ll be pleased, and maybe even moved to tears by the way she was brilliantly celebrated as not just a legend but also as a flesh-and-blood human being who simply put one foot in front of the other until her dreams came true.

If you’ve been feeling a bit pessimistic due to the current social climate, and need a boost to remind you how much impact a single person can have on this world, we recommend you run (not walk) to the Smithsonian’s National Museum of African American History and Culture.

Who knows, if you check it out on opening day you may even get to catch a glimpse of her in person taking it all in (that possibility alone is enough reason to head down there).

“Watching Oprah: The Oprah Winfrey Show and American Culture” opens Friday and runs through June 2019 at the Smithsonian’s National Museum of African American History and Culture, located at 14th Street and Constitution Avenue in Washington, D.C.