Charlottesville flamethrower who held off white supremacists sentenced to jail

Activist Corey Long was sentenced to 360 days, with all but 20 suspended. 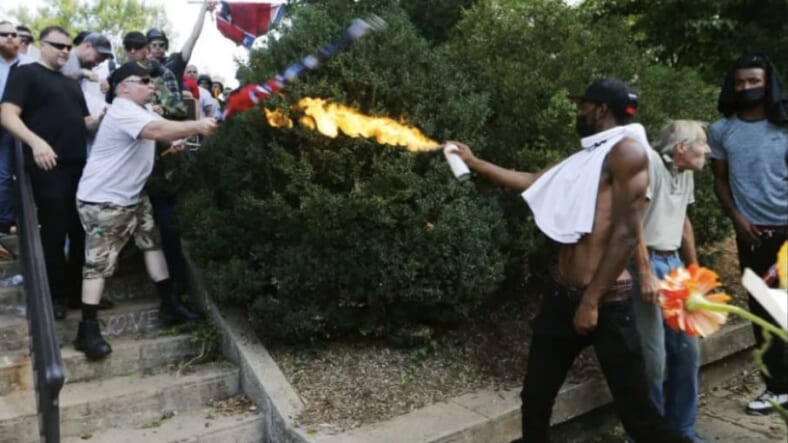 One of the most memorable photos of last year’s Charlottesville protest was that of a young man lighting an aerosol can on fire to keep armed white supremacists at bay.

That community activist’s name is Corey Long and he was among those arrested in the aftermath of the violent protests last August. Long, 24, was convicted of disorderly conduct for using the improvised flamethrower on the raging racists on Friday. Long was sentenced to 360 days, with all but 20 suspended.

As white supremacists filed out on August 12, 2017, Baltimore Ku Klux Klan leader Richard Preston pointed his gun at Long, who was outside of the park. Long was holding the homemade flamethrower with his arm extended.

“I thought [Long] was going to be shot and killed,” witness Frank Buck said. “I then heard the gunshot.”

He says he saw the bullet hit the ground near Long’s feet. Long, unfazed, kept the flame lit. Defense attorney Jeroyd Greene said Long had been spit on and called racial slurs that day, and that Long first sprayed his aerosol can without lighting it. He only lit it when he perceived a threat, which doesn’t make a case for disorderly conduct, the attorney argued.

“I lit the can because he wouldn’t get out of my presence,” Long told the judge.

For his part, Long wasn’t too pressed about the sentence.

“It is what it is,” Long told Charlottesville Weekly. “It’s no sweat.”

In Virginia, inmates with good behavior only serve half of their sentenced time for misdemeanor charges, so Long will likely be incarcerated for 10 days.

READ MORE: Lil’ Kim files for bankruptcy, NJ house is up for auction

“Corey Long was and is and remains a hero,” said Malik Shabazz, president of Black Lawyers for Justice, to cheers from the dozens of community activists who showed up in support of Long. “Corey Long did nothing wrong.”

Shabazz told Long they’ll be the “proudest days you will serve in your life,” and reminded him and the crowd that Martin Luther King Jr. was also arrested and convicted.

On May 9, Preston pleaded no contest to discharging a firearm within 1,000 feet of a school, a class 4 felony that carries a maximum sentence of 10 years and fine up to $100,000.