Congratulations Trump, You Played Yourself: How Kim Jong-un went full gangsta at the North Korea Summit

Was the "agreement" signed with ink or crayon? 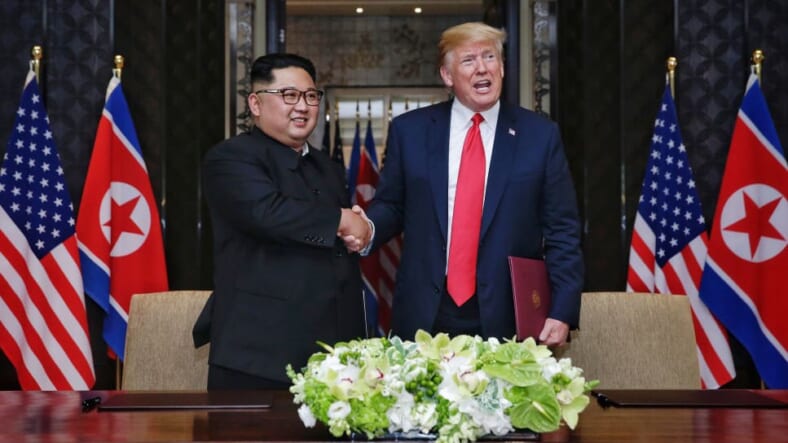 Don’t let that cherubic Garbage Pail Kids face fool you: Kim Jong-un is a straight gangsta. Or maybe he just has the easiest target ever in Donald Trump.

The two clown princes – who possess the combined nuclear might to blow the planet off its axis yet can’t seem to do anything presentable with their hair – met in Singapore Tuesday for a summit agreement that anyone who took a fifth-grade civics class can tell you the United States got the ass end of.

The summit itself marked the culmination (maybe) of a nearly two-year beef between the leaders: Kim introduced everyone to the word “dotard” and Trump did what he does best – used his Twitter fingers to make us all fear for our goddamn lives.

READ MORE: Atlanta Falcons owner says players must stand for anthem and makes them ride with police to see what they go through

Just heard Foreign Minister of North Korea speak at U.N. If he echoes thoughts of Little Rocket Man, they won’t be around much longer!

North Korean Leader Kim Jong Un just stated that the “Nuclear Button is on his desk at all times.” Will someone from his depleted and food starved regime please inform him that I too have a Nuclear Button, but it is a much bigger & more powerful one than his, and my Button works!

Trump agreed to meet Kim at the beginning of May, but he abruptly canceled the appearance three weeks ago, basically threatening to stick some warheads up Kim’s ass if North Korea took any “foolish and reckless” action.

Sadly, I was forced to cancel the Summit Meeting in Singapore with Kim Jong Un. pic.twitter.com/rLwXxBxFKx

Trump spoke about the rivalry at a press conference last month: “Our military, which is by far the most powerful anywhere in the world that has been greatly enhanced recently as we all know, is ready as necessary.” Which is the closest thing to “My d— is bigger than your d—” that any sitting U.S. president has ever said on the record.

The ever-capricious Trump ultimately changed his mind and agreed to stick to the June 12 summit. After five hours of talks, they signed a “historic document” that includes a promise of denuclearization on behalf of North Korea as well as the end of joint military exercises with the United States and South Korea.

Nowhere in the agreement is a timeline or any means of verification regarding the denuclearization. Even the managers at Steak ‘n’ Shake verify that the associate on the French fry pit cleans everything thoroughly before closing for the evening.

Also, barely addressed in this summit were the myriad human rights violations that even the United Nations has verified. Which is wild considering that Trump claimed the summit was provoked by Otto Warmbier, an American college student who died shortly after being held hostage by the Kim regime in 2017.

Here’s y’all’s president having meet-cutes with a despotic leader and not taking the time to address petty, insignificant shit like tortures, rapes and murders. But he has all the time in the world to shit on Canadian prime minister Justin Trudeau. Priorities, man.

You see, Trump’s predecessors knew that the Kims were evil, tough-talking squidget-people who didn’t merit anything resembling a public parley. But Kim Jong-un peeped that a seventh grader is now sitting in the Oval Office and decided to dig his sausage-finger hooks in as far as he could.

Kim scored a meeting with a sitting U.S. president (something his father and grandfather couldn’t do), and there’s pictures of Trump shaking hands with Kim will probably be required to hang in every house in North Korea. It’s like the bony, asthmatic little freshman with alopecia getting to take the head cheerleader to senior prom.

Meanwhile, the U.S. achieved nothing substantive during this summit, and we agreed to pull the U.S. army out of Kim’s backyard while Kim continues doing what he damn well pleases. All of this really amounts to a steaming pile of dog shit – they might as well have signed on rolls of Charmin.

Perhaps the only gem we gained from this whole thing is Dennis Rodman acting like he never encountered a drug he didn’t like.