A GoFundMe page has been created to help Drew, the homeless man. 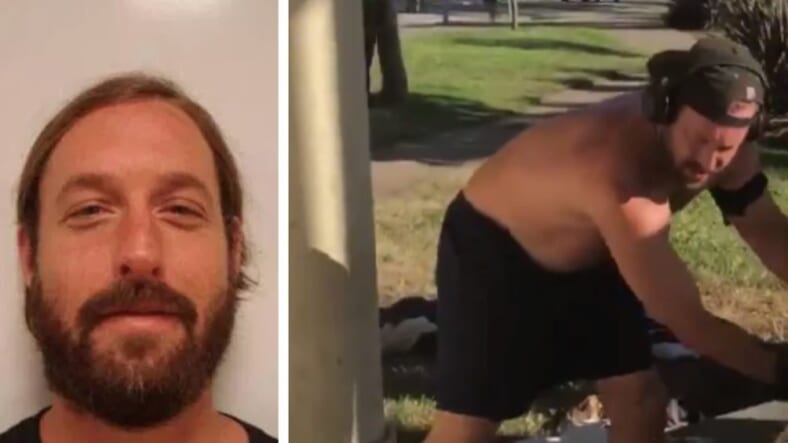 Henry Sintay (aka Jogger Joe), the man seen on a viral video throwing a homeless person’s belongings into Oakland’s Lake Merritt on June 8, has been arrested for robbery, but not for that incident.

According to Oakland News Now reporter Zennie Abraham, Sintay has been charged for stealing a phone from Matt Nelson, a man who saw Sintay later that day at Lake Merritt as Sintay was taking the homeless man’s belonging out of the water because he didn’t want to “pollute the lake.”

Nelson, who was recording the entire incident, asked Sintay his name and that’s when things went left. Sintay grabbed his phone and according to Nelson, he was also assaulted by Sintay and an unidentified man with Sintay.

“Is this that same dude? UPDATE: Thank you, loved ones! And thanks especially to my amazing nephew, Theo! Henry and his ‘friend’ assaulted me multiple times, I was also dragged by their moving vehicle and hit a few times in the head, but I’m safe now. Still do not have my phone. Please keep calling it and if Henry picks up, I’d like it back. I’ll continue to share the story and folks should feel free to reach out to me here or via email.”

Sintay is being held on $100,000 bond. He will be arraigned on June 13 at the Wiley Manuel Courthouse in Oakland. His robbery charge is reported to be for the theft of Nelson’s phone.

The homeless man whose belongings Sintay tossed goes by the name Drew and the Oakland community has rallied around him. Kenzie Smith (his name is familiar because BBQ Becky called the police on him at this same Oakland lake earlier this year) and others started a GoFundMe page for Drew to replace his things. The page went up on Sunday and has so far raked in more than $6,000.

In addition to replacing Drew’s tossed items, the money will also go towards the purchase of a tent to help Drew feel more protected.