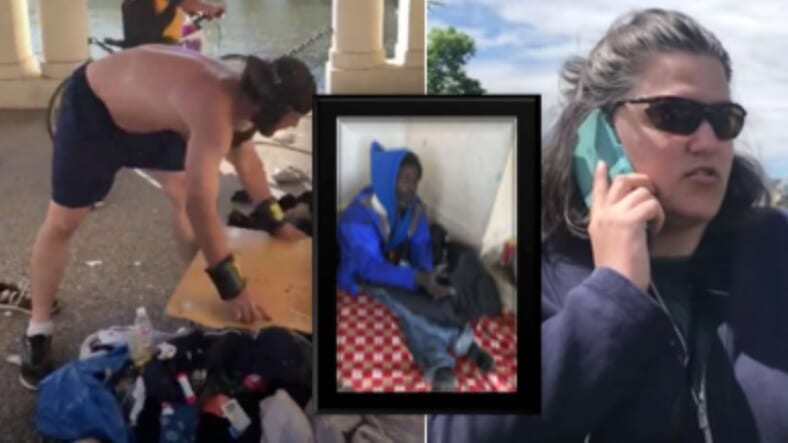 A white California jogger with a chip on his shoulder assumed he had the right to hurl a black homeless man’s life-long belongings into a lake.

The cruel ordeal was caught on video by Oakland residents Kenzie Smith and JJ Harris who tried to stop the jogger tearing up the homeless man’s makeshift home. But the mean-spirited, unidentified jogger didn’t seem to care.

“I’m picking up trash, what do you want me to do?” claimed the jogger.

“It’s disgusting,” the man said as he threw the homeless man’s possessions into a nearby lake. “It smells like piss,” said the jogger in a video that was posted on Facebook.

The jogger proceeded to assert his imaginary privilege and poke his nose in the homeless man’s business and throw his things in the trash.

“This guy’s been living here for years,” one bystander said. They identified the man as “Drew.”

The jogger then replied: “I’m putting trash in the trash can.”

The jogger then had the nerve to suggest that Drew’s belongings landed in Lake Merritt on “accident.”

“No, it was not. I saw you drag it and throw it in,” a woman can be heard saying on camera.

“He just picked up all this guy’s stuff and started throwing it in the lake,” another bystander says.

By the way, Lake Merritt is the same Lake area where a black family tried to have a barbecue and a woman Jennifer Schulte, aka BBQ Becky, called the police on them. Becky, however, got burned when police told her the family had a right to grill at the lake.

The Oakland community rallied around the black family and held an epic BBQingWhileBlack event.

“I was just completely taken aback,” Harris told The Guardian on Monday.

“This is a homeless man’s stuff — a guy who is always peaceful, never causing trouble, always giving you a smile. That he [the jogger] would do this to another human being, the lack of compassion is astonishing.”

Speaking to SFGate, Smith added: “With me and my situation…I vowed to City Hall that I would not have another BBQ Becky…When [Harris’] video broke, I was outside at the lake, I found Drew and I talked to him, gave him food and water. I went back out that night to make sure no one messed with him again.”

If history is any indication, Drew will get redemption. Residents have already started a GoFundMe page and so far raised almost $6,000 since Friday.

“This happened in the community and it was the community who responded to quickly,” Smith told the Guardian. “It shows Drew that people do care.”

We sure hope Drew gets redemption and even a new place to live in Oakland since this lake is such a desirable location for racists.