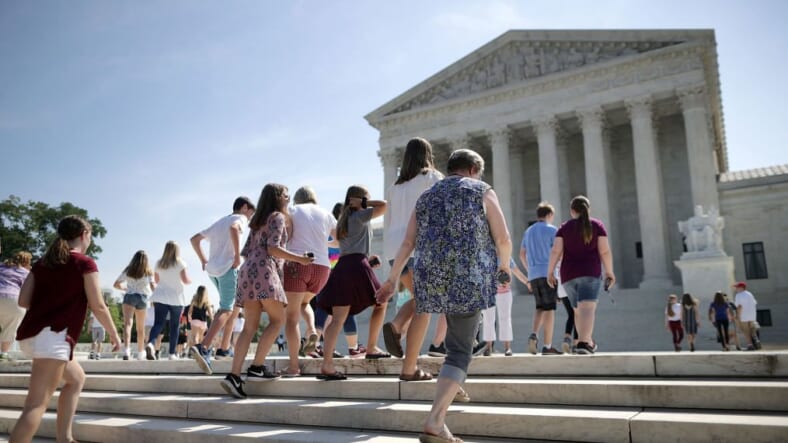 WASHINGTON, DC - JUNE 18: Visitors line up outside the U.S. Supreme Court plaza before the court handed down decisions June 18, 2018 in Washington, DC. The court handed down opinions in five cases, including decisions about sentencing guidelines, gerrymandering and other topics. (Photo by Chip Somodevilla/Getty Images)

A new lawsuit claims that Washington, DC is pushing out its long-time residents by pricing them out in order to make way for millennials.

According to DCist a lawyer has filed a discrimination lawsuit against the city claiming that gentrification is preventing residents from affording high rents. The complaint states that the city’s housing and urban renewal policies are designed to favor younger renters, while middle-aged and lower income residents are unfairly being pushed to the wayside because of rising costs.

“The city is intentionally trying to lighten Black neighborhoods, and the way they have primarily been doing it is through construction of high density, luxury buildings, that primarily only offer studios and one bedrooms,” the suit reads.

According to Aristotle Theresa, the lawyer who filed the suit, more than $1 billion in damages is being sought and it’s being filed on behalf of three residents and CARE, a community group with over 20 members.

“I think [gentrification] is problematic because it strips away the heart and soul of the city,” Theresa says. “DC is unrecognizable. It’s a staging ground for people at a certain point in their career. It’s a pitstop, and they come and they go and they don’t offer much,” he says.

He claims those agenda are pushing for “creative” workers and making rent unaffordable for DC residents. The complaint states that former Mayor Adrian Fenty’s administration creating the discriminatory policies and it is having a profound impact on the African-American community.

“D.C. residents’ access to rental property [is] predicated at least in part on membership in an invented discrete class which directly discriminates on source of income,” he writes in the complaint.

Theresa, who is a Civil Rights attorney focusing on Zoning and Administrative Law, named the Office of Planning, the Zoning Commission, the Deputy Mayor for Economic Development, Mayor Muriel Bowser and former Mayor Adrian Fenty, as defendants in the suit.