The film won three awards at ABFF in Miami including Best Director and Best Narrative. 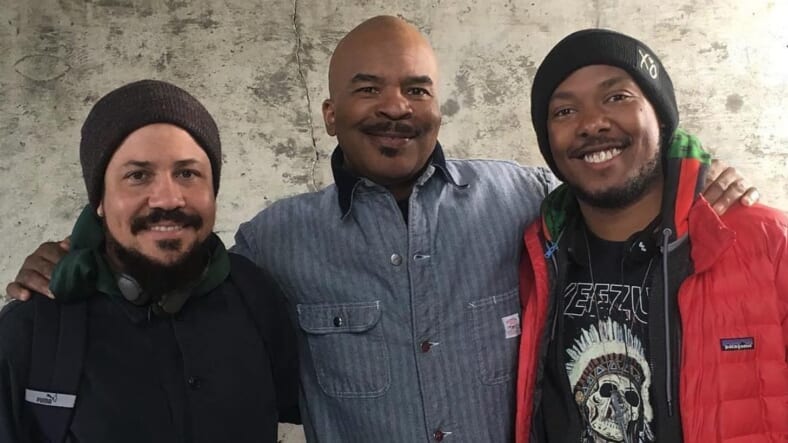 It’s not often that a film manages to deliver a story as compelling, moving, heartbreaking, and uplifting as Sprinter.

The film racked up several awards at the American Black Film Festival in Miami earlier this month including Best Narrative, Best Director, and The Audience Awards, and it’s no surprise.

“It’s a story about a boy and his mom,” says producer, Robert Maylor.

But Sprinter is much more than that. In it, we see a plight that’s all too familiar to immigrant families. A parent sets off to make money in America, all in hopes of providing a better life back home for the family they leave behind.

Dale Elliott stars as Akeem, a 17-year-old high school student whose mother (Lorraine Toussaint) left him and his older brother with their father in Jamaica while she moved to America for two years. Those years came and went and ten years later, she was still in the states; her two boys growing up without her, except for their regular Skype conversations. His track coach (David Alan Grier) encourages him to try running the 200 meter race instead of the 400-meter event he was used to losing in. He quickly rises to fame as a track star and earns the nickname “Rocket” because of his explosive speed. While those around him see the fame and fortune in his future, Akeem is more inspired by the fact that he could qualify for a race in the U.S., and finally see his mother.

While Akeem’s Rocky-like training regimen and rise to the top is thoroughly entertaining (and even includes a cameo by Usain Bolt) what’s more striking about the film is the range of emotions displayed by Akeem as well as his father and brother as they cope with their mother’s absence in their own ways. It highlights a struggle all too familiar to so many immigrant families and shows Jamaica in a way we haven’t seen before on film.

Perhaps that’s why so many famous faces clamored to be involved in the project. Will Smith and Jada Pinkett Smith signed on as producers shortly after receiving the script and NBA star, Richard Jefferson was the movie’s first investor, handing Maylor a check to finance the film the day after he and the Cleveland Cavaliers won the championship in 2016.

“It’s such an important message and the story needed to be told because it’s so relevant. You see what’s going on with immigration today and how families are being torn apart; some willingly and some unwillingly.  In Jamaica, track is the main thing. Here in America, they say you can slang drugs or you got a wicked jump shot. Those are your two chances to get out. To intersect those two stories about family and also seeing how athletics as a way for people to advance their lives touched me,” says Jefferson.

Sprinter’s director, Storm Saulter had a vision of how the film would shake out, but finding its star was more of a cosmic twist of fate.

“I originally wanted Kadeem Wilson (who plays the elder brother, Germaine) to play the lead but he wasn’t an athlete. As the years went on, I decided he was a bit too old to play a high school student. I was in Norway hanging out with some folks and this Jamaican woman was watching a video on her phone and laughing her butt off. She said, ‘You have to come look at this guy. He’s an Instagram comedian.’ He had a towel on his head and he was playing a grandma giving someone a beating and it turned out he was a track runner. I saw one shot of him in this running pose and thought, ‘Whoa.’ I tracked him down and had no idea his life story was so aligned with the character’s. He went to college on a track scholarship. He was on one of the major track teams in high school. He didn’t think of himself as a cinema actor, but I knew he had it,” he says.

Being a track star wasn’t the only thing Elliott and his character had in common.

“He didn’t meet his dad until he came to Los Angeles to shoot the final scenes of the film. He hasn’t seen his mom since he was five years old. He’s 22,” Saulter continues.

“These emotions can be as intense as a death. Being away from your parent is very difficult. He had to access this emotions and he had closed them off so much inches real life. When we got to a point when Akeem is asking his mom if she’s coming back, Dale was like, ‘I have no feelings for my mother. She’s my mom, I love her, but I don’t have any feelings to make this scene work.’ He found it, man. He found it within himself. He had to get serious and dig deep and feel it. He didn’t want to go there, but he did.”

Elliott ultimately delivers a stand-put performance in the film and David Alan Grier‘s portrayal of his coach and mentor is equally impressive.

“David Alan Grier wanted the role so bad and everyone saw him as a comedian. We wondered if he would be able to get the accent right,” admits Maylor. “I sat with him every night after filming and spelled things out phonetically util he got it, and he did.”

Lorraine Touissant’s performance was mesmerizing as well, and she, like her costars, had a personal connection to the story. “Lorraine lived the story too. Her mom left her in Trinidad to work in America,” says Maylor. “All of our actors actually had this true experience.”

Both Maylor and Saulter are more than satisfied with how their vision turned out and they’re just getting started.

“We want to start the Caribbean cinema wave. I don’t feel we get to have a lot of ‘slice of life’ films. We don’t have our own Ladybird or Napolean Dynamite, so it was really important to tell that kind of story. It’s so accessible because we shatter people’s ideas of what Jamaica is and reach everyone because it’s so authentic,” says Maylor.

“The reality is, it has been bubbling for a while but we want to make stories for global consumption that cross lines and tell universal stories wrapped in our language and our landscape,” adds Saulter. “The Caribbean is such a mix of so many people. It’s a glimpse of the future in a way. It’s a microcosm of the world. It’s one of the richest places in the world as far as experiences.”

Check out the trailer for Sprinter: