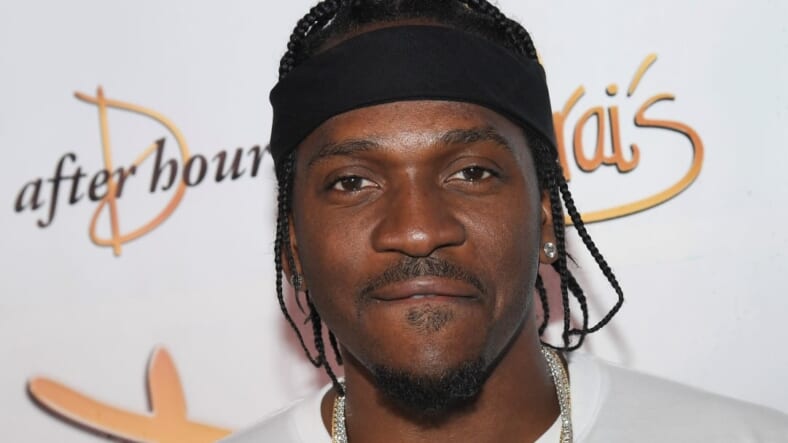 Rapper Pusha T has taken aim at President Donald Trump and made it clear that his views are a world away from those of his G.O.O.D music label head Kanye West.

West has been slammed for his sunken place comments and proudly sporting a red “Make America Great Again” baseball cap. Yet as far as Pusha is concerned those hats are modern-day Klan attire, calling them “this generation’s Ku Klux hood,” in an interview with The Guardian.

Pusha, imma let you finish, but that might just be the greatest line of all time given today’s racial climate.

So where was Pusha when West was going off the rails, rallying in support of the tyrannical president?

Pusha told the newspaper that he and Ye: “disagree on plenty of shit.”

When it came to West’s victim-blaming slavery comment that sent social media buzzing and got him an embarrassing tongue-lashing from TMZ’s Van Lathan, Pusha said he confronted West face-to-face.

“Well, when he did TMZ, I flew to Wyoming the next day [to confront him].”

“We spoke about insensitivity. The actual messaging. Where I felt he went wrong. You can’t even paraphrase about situations and issues that are so personal to people. When it comes to death and real-life people and persecution and things where families have been divided, you have to be more careful.”

In all fairness, Pusha said West struggled with getting the right messaging across and that cost him.

“I feel like the keywords [sic] in what he said were so strong and powerful, that it doesn’t let you get into the nuances, the underlying perspective. Or even wanna hear how he’s thinking.”

Pusha not only said the red MAGA hats are the KKK’s new hoods, but he asked the question we’ve all been wondering about: “When was America so great anyways?” he asked. “Name that time period?”