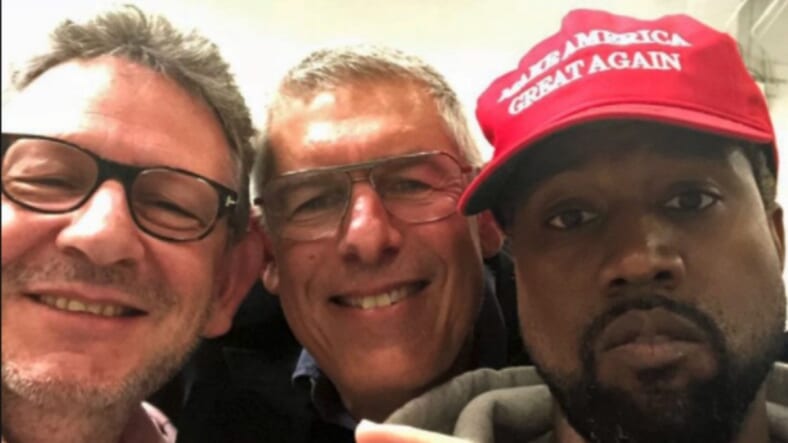 The fact that Yeezy has confirmed that he’s now caping for white supremacy, aligning with Donald Trump through his tweets, calling him his brother and stepping out with a devil red Make American Great Again ball cap is proof that the rapper has sunk to a new low.

And thus it didn’t take long for the memes to begin to circulate, and Daily Show writer and Emmy winner Travon Free has the best clapback meme so far.

Clearly the College Dropout rapper, should have stayed in school a few more semesters for some black history courses.

Kanye West surfaced in Calabasas, California, on Wednesday after a barrage of erratic and confusing tweets that even made his wife Kim Kardashian defend him on Twitter after West received swift backlash for tweeting his affection for Trump, People reports.

“You don’t have to agree with trump [sic] but the mob can’t make me not love him. We are both dragon energy. He is my brother. I love everyone. I don’t agree with everything anyone does. That’s what makes us individuals. And we have the right to independent thought.”

Kanye continued, “If your friend jumps off the bridge you don’t have to do the same. Ye being Ye is a fight for you to be you. For people in my life the idea of Trump is pretty much a 50 50 split but I don’t tell a Hillary supporter not to support Hillary I love Hillary too.”

He also posted a pic in the MAGA hat with Universal Music Group executive Lucian Grainge and YouTube’s head of music, Lyor Cohen.

Following the manic series of tweets outlets reported that West lost 9 million followers after posting a picture of a MAGA hat signed by Trump and another post of him wearing it. Then Twitter said the social media numbers fluctuation was due to a miscalculations and West’s Twitter count went back to 27 million.

Still many on social media are distancing themselves from West and his delusions of grandeur.

John Legend has something to say about Kanye West’s unordinary tweets and took issue with him praising the President saying:

“I love that great, brilliant artists have the power to imagine a better future. But artists can’t be blind to the truth,” he tweeted.

“The defining trait of Trump’s campaign and political profile was his embrace of white supremacy. He made it clear every time he spoke,” he added. “Some serious cognitive dissonance to ignore that for the other x% you might find appealing. I guess I agree with >1% of anyone’s thoughts though.”

Even wifey Chrissy Teigen threw her hat into the fray letting Kim Kardashian know that if she needs to make a move, joking she’s got her back and an inflatable bed.

“I have an air mattress here and I have been itching to bust it out if you need.”

And apparently Kim reached out to her hubby to clarify his Trump statements.

“My wife just called me and she wanted me to make this clear to everyone,” he wrote. “I don’t agree with everything Trump does. I don’t agree 100% with anyone but myself.”

Trump even chimed in tweeting “Thank you Kanye, very cool!”

In his erratic tweets, West even took a dig at President Barack Obama saying that he never did anything for Chicago in the eight years he served as President.

Let’s remember that West is from Chicago so what has he done.

And never forget that Barack Obama called West a jackass. So should we expect anything less?

Chance the Rapper stepped knee-deep in the online melee and got people upset about his support of West when he tweeted:

“Black people don’t have to be democrats,” and “Next President gon be independent.”

Oh no baby. What is you doin?

But one good thing about Yeezy’s tweets is that it gave Oscar winner Jordan Peele new found inspiration. Can you say sequel?

*Gets inspired
*Starts writing ‘Get Out 2’ https://t.co/zqOW6Xxx9v