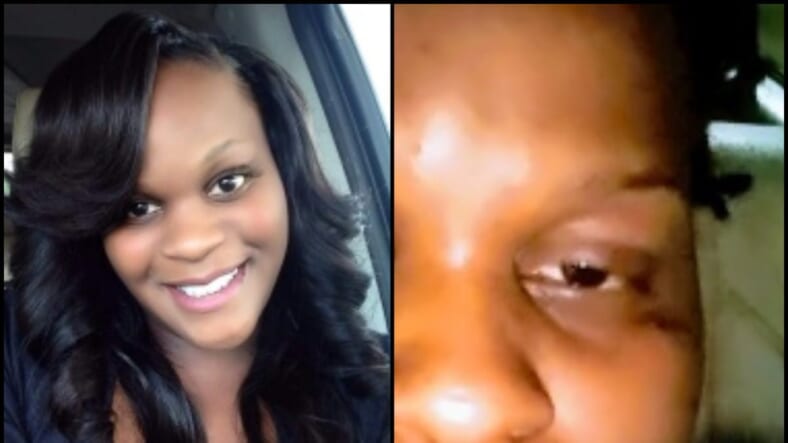 Kirenda Welch before the encounter and a photo of wounds she received under her eye as a result of her arrest. (Photos of Kirenda Welch)

Kirenda Welch started out preparing for a relaxing weekend with her family on the evening of Friday, June 29, but it ended up being the start of a harrowing nightmare.

The 36-year-old pharmaceutical trial monitor and pregnant mother of four from Oakleaf Plantation, Fla., broke down in sobs as she recounted her arrest and violent night in a Jacksonville, Fla., jail.

Welch says her troubles began when she and a newly hired corrections officer, Catherine Thompson, first exchanged words. Welch alleges that Thompson taunted, punched, and pepper sprayed her in the face while other jail staffers ignored her requests for medical treatment. As a result, Welch lawyered up seeking help from the same law firm that represented the family of Trayvon Martin, the Sanford, Fla., teen shot dead in 2012 by a self-proclaimed neighborhood watchman.

“I just want people to know the reason that I’m doing this is I never expected to be the victim of police brutality,” Welch told theGrio. “I felt like I had to do this because if they are doing this to a pregnant woman, what are they doing to our (Black) men and sons?”

Welch and her lawyer, Christopher O’Neal, a partner with the firm led by Benjamin Crump, said they are contacting the Department of Justice and the Florida state attorney’s office to compel these agencies to seek justice against the members of law enforcement involved in the incident.

As they observe developments on the criminal front, her legal team is also moving toward civil litigation. Thompson, who Welch also contends called her Kunta Kinte in addition to the assault, has been terminated. The Jacksonville Sheriff’s Office said the incident came within the officer’s 18-month probationary period.

The public information office for the Sheriff’s office did not immediately respond to a telephone message left on Tuesday.

O’Neal agrees that this case must set an example in an area where clashes between law enforcement and people of color regularly happen.

“We won’t be a scapegoat for a pattern and practice that clearly was condoned by that agency,” O’Neal said. “Right now, we’re looking at individual defendants to be named, and the Sheriff’s Department as a whole. We have not drafted our (civil) lawsuit yet because we want to see what we’re going to be able to do from a pre-litigation standpoint. If they’re willing to do the right thing as an agency, we don’t have to take that route. It will not go by the wayside.”

“We don’t want her children to look up and say, ‘Remember what happened to mommy?’ “O’Neal said. “We want some sort of reform, some sort of ability to have a check and balance system.”

A summer’s night of fear

Welch’s case unfolded at around 7:30 p.m. on Friday evening. Her 11-year-old son, Chase, had just finished playing in a youth basketball game and she was driving both he and his 3-year-old brother, Jagger, back home. Jagger somehow escaped from his car seat, prompting Welch to make an illegal U-turn so she could pull over to buckle him back in.

As Welch jumped out of the car, she saw that a police cruiser had pulled up behind them and an officer jumped out with his gun drawn.

Welch, who is a graduate of Florida A & M University, gave the officer her license thinking this would be nothing more than a routine traffic stop, but when the officer returned, Welch says she was asked, “Do you want to tell me the truth about what’s going on with your license?”

The male officer informed Welch that her license had been suspended for driving through an unattended electronic toll. Welch informed him that she was unaware of the violation and would have paid the toll had she known about it.

“Maybe if I was any other color, or if I was a white woman, I don’t believe you would do this,” she remembers telling him.

Welch continued to admonish him for arresting her. The arresting officer supposedly made some pot shots about her mothering skills and told her to shut up. When she didn’t quiet down, he allegedly threaten her with “I’m going to give you all the tickets I can give you.”

The officer arrested Welch, handcuffing her and putting her in the back of the cruiser while her 11-year old watched trying to keep his little brother calm. At the very least, Welch was allowed to call her mother to come collect her children.

The worst day of her life

When Welch arrived at the Duval County Jail in Jacksonville, Corrections Officer Catherine Thompson, 21, gave her a paper bag with a jail uniform inside. Welch complained that the shirt, pants and socks were dirty and smelled badly. She was told to put them on anyway and complied, but immediately started scratching at her skin because of the pants. She took them off and asked for another pair. 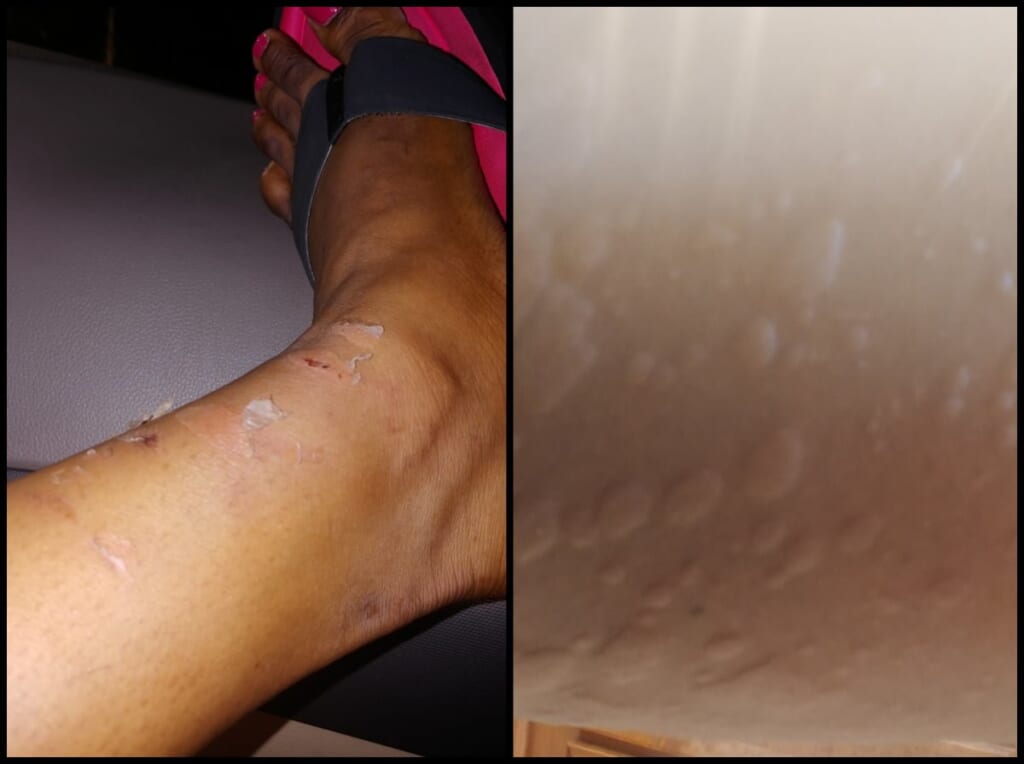 Some of the wounds Welch says she received at the hands of Thompson and the skin irritation from wearing prison issued pants. (Photos courtesy of Kirenda Welch.)

Thompson, who had been a corrections officer for all of 14 months, allegedly told Welch, “You’re going to put those pants on or I’m going to put them on you.”

Even though another officer provided Welch with a different pair of pants, she and Thompson continued to exchange words.

During the argument, Welch says that Thompson made a snide remark, calling her Kunta Kinte three times. Welch responded telling Thompson she was the type of law enforcement officer who gives others a bad name.

“I guess that makes you feel like you have a little bit of power,” Welch recalled. “She walked toward me and said, ‘Do you want me to take this badge off and show you what I can be like without it?’”

According to Welch, Thompson then handcuffed her behind her back and put ankle cuffs on her, which only made the situation worse.

“Before I could look up she punched me smack in the middle of my forehead,” Welch said. “I fell back on the bench and she grabbed my head and banged the left side of my head against the wall. It was a surreal experience. I actually came outside of myself and thought, ‘Is this happening to me?’

Welch felt blows to her stomach and that’s when she remembered that she was five-weeks pregnant, so she pushed Thompson off of her with her feet. It only enraged Thompson further who then began holding Welch down with one hand and punching her with the other.

An officer came in, saw what was happening and asked Thompson to stop, Welch recalled. At this point, Welch contends that several other corrections officers and Thompson’s sergeant also came in, but then simply watched the fight ensue.

“I had two seconds to breathe and then she pepper sprayed me,” Welch said, describing it as the worst pain she’d ever felt. Making matters worse was that the open wound on her forehead from being punched made a frying sound as the spray settled on her face.

At some point in the chaos, Welch screamed she was pregnant. That’s when she says everyone’s demeanor changed. A nurse came in to treat Welch for her wounds and check her blood pressure. She, however, was never treated by a doctor or was transferred to a hospital.

Fighting for her rights

Christopher O’Neal, who spent 10 years as a police officer in Gainesville, Fla., before becoming an attorney, said the scenario sounded sadly familiar to him.

“That us-versus-them nature is pretty typical,” O’Neal said. “They’re supposed to be protecting and serving, but they’re basically organized gangs.”

After leaving jail at around 5 a.m. the next day, she immediately went to the emergency room at Orange Park Medical Center in Orange Park, Fla., and was treated for contusions. At the time, she says, her biggest concern was her unborn child, who doctors concluded is fine. Welch, however, says she has experienced headaches daily since the attack and they seem to be worsening with time. 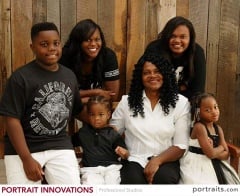 “We’re here today to expose what happened so that someone else doesn’t have to ever go through this again,” O’Neal said.

Welch, who is most motivated by her children, particularly the two who had to witness her arrest, believes there are too many instances of unfairness, race and violence between people of color and law enforcement. She’s ready to do her part to put an end to it.