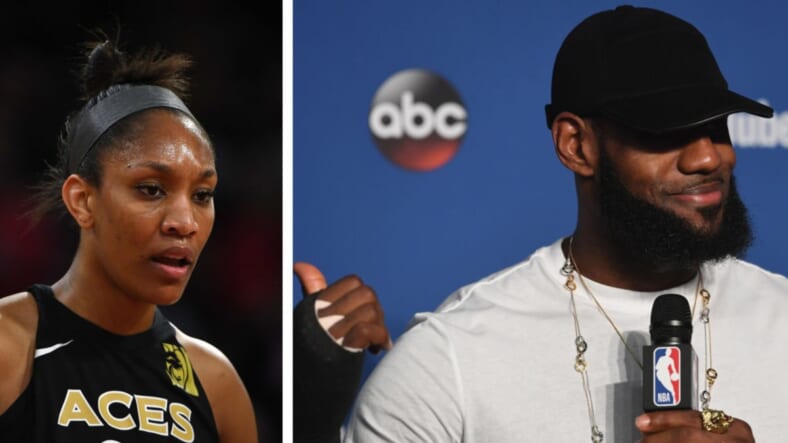 WNBA player A’ja Wilson wants her piece of the pie and set off a social media firestorm when she made mention of the pay disparity between LeBron James’ multi-million dollar deal and the pennies women basketball players are offered, reports Blavity.

“154 million. Must be nice. We over here looking for a million, but Lord let me get back in my lane,” Wilson wrote. “And I love Bron not taking nothing away from him.”

King James is set to dominate the West Coast after securing a four-year deal with the Los Angeles Lakers worth $154M. Wilson who plays for the Las Vegas Aces, tried to backtrack to mention that her comment wasn’t a slight to James but social media wasn’t having it and pointed out that the WNBA League needs to level up and get more fans in the seats.

“No money coming in, how you expect to have it come out? Very little fan base, unsettled cities and teams. @WNBA needs to work on ways to get people to watch,” said user @DBoy46.

“Let’s be clear, there is a lot of sexism that still goes on,” she said.

“People do not believe that women can be superb professional athletes. That frankly is an ignorant perspective, but if you haven’t had the opportunity to see a game, a player or experienced the game, then perhaps you have an uninformed perspective. We invite folks into the area to actually see a game.”

There are stark differences in pay between the WNBA and the NBA. A WNBA player’s salary cap is $110,000. The starting salary for an NBA player is $565,000, according to CNBC.

“When you look at professional athleticism, it doesn’t have an evergreen shelf life. The average time a woman plays professional basketball is five years,” Borders said.

“These programs are to ensure that our women are fully armed to be successful not only as professional athletes, but in life,” she continued.