Univ. of Manchester students replace poem featured on campus by well-known racist with with Maya Angelou’s ‘Still I Rise’ 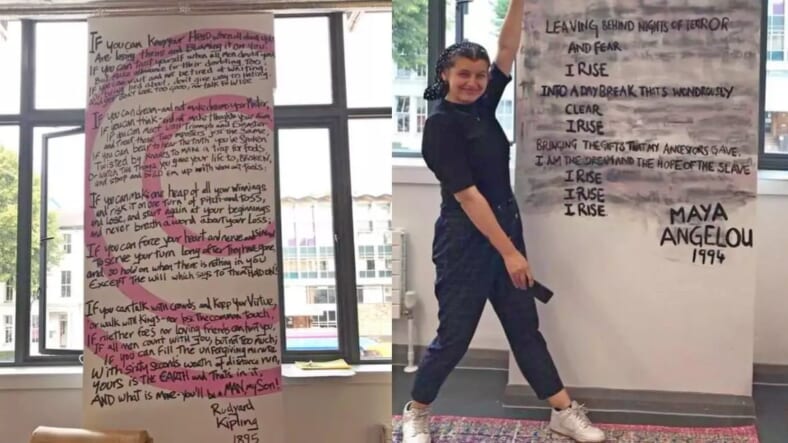 The Rudyard Kipling poem was replaced with the Maya Angelou poem by University of Manchester students in an act of defiance. (Facebook / Sara Khan)

University of Manchester students took matters into their own hands and painted over a mural of a 1895 poem by Rudyard Kipling because they deemed him as racist, reports The Guardian.

The poem titled, “If” was painted on the wall of the student union building, which had recently been renovated. Kipling, they argue, “dehumanized people of color” and so they students painted over the “If” poem and then replaced it with verses from Dr. Maya’s Angelou’s 1978 poem “Still I Rise” instead.

In a statement on Facebook, Student Union Liberation and Access Officer Sara Khan said none of the students were asked their thoughts about the Kipling poem before it was displayed in the mural.

“We, as an exec team, believe that Kipling stands for the opposite of liberation, empowerment and human rights – the things that we, as an SU, stand for,” she wrote.

“Well known as author of the racist poem, ‘The White Man’s Burden,’ and a plethora of other work that sought to legitimate the British empire’s presence in India and dehumanize people of color, it is deeply inappropriate to promote the work of Kipling in our SU, which is named after prominent South African anti-apartheid activist, Steve Biko.”

“Kipling’s work has long been criticized for having racial overtones and being morally insensitive and aesthetically disgusting,” she continued.

Khan said the defacing of the mural was “a statement on the reclamation of history by those who have been oppressed by the likes of Kipling for so many centuries, and continue to be to this day.”

Janet Montefiore, a professor emeritus at the University of Kent and editor of the Kipling Journal, sided with the students saying:

She added: “’If’ is not a racist poem. It’s a poem of good advice. I don’t personally like [the poem] but it has meant a great deal to a lot of people.”

The reaction on Twitter, for the most part, has not sided with Khan and the other students. Some in fact or down right racist against Khan’s Middle Eastern heritage and even go after Maya Angelou. Here’s a sample of some of the comments left behind:

@fatimabidSU You & your ilk are anti-intellectual fascists for what you have done. Maya Angelou isn't worthy of carrying Kiplins note pad. Why not a Chinese or Persian poet as there are many great ones. No right to change history! You liberals always get it wrong.

Nothing like a bit of cultural vandalism to announce to the world just how woke you are.