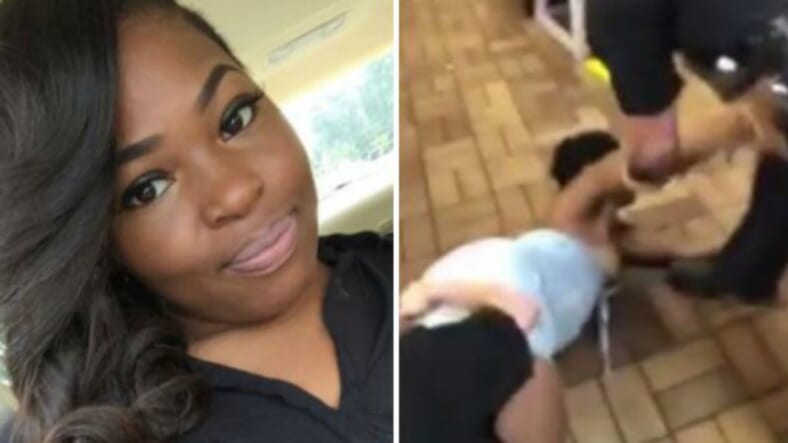 Earlier this year, 25-year-old Chikesia Clemons from Mobile, Alabama was brutally arrested inside a Waffle House.

On Monday, Chikesia Clemons, learned for the second time since April that justice isn’t always blind when it comes to Black people.

The Alabama native was arrested at a Waffle House in Saraland in April and was found guilty of disorderly conduct and resisting arrest during a late night trial in Mobile County.

Her arrest made national headlines after a video of Clemons being manhandled by Saraland police officers inside a Waffle House went viral. In the clip, Clemons is shown being wrestled to the ground by three responding officers in what both the public and Black right’s activists believe was a clear incident of police brutality.

After her video sparked outrage on social media, Rev. Al Sharpton and activist Tamika Mallory went to Alabama on separate occasions to raise funds for her legal defense and advocate on Clemons’ behalf. Prominent civil rights attorney, Benjamin Crump, was hired to take on her case.

In the months since her arrest in the Spring, a petition containing more than 50,000 signatures was created and then delivered to Saraland’s district attorney on June 19th asking that the charges against her be dropped. However, the efforts of the community and her team fell on deaf ears.

At the conclusion of the trial, Judge Mark Erwin said that Clemons was found guilty because the facts of the case met the legal definitions required to find her guilty, and that the high level of emotion that had played out in the weeks and months before the trial were irrelevant to the proceedings.

Clemons will have to pay a $200 fine plus court fees for each charge. The judge sentenced her to 10 days but said he will suspend the sentence for 1 year of informal probation.

Criminal attorney, Marcus Fox, made an oral notice of appeal for Clemons before the hearing was concluded and said they are disappointed, but happy to take the case to Mobile County in hopes of a different outcome.