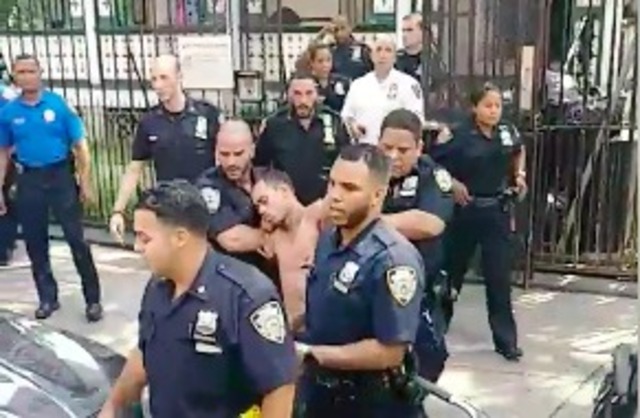 According to Patch.com, the clip shows community members having a shouting match with police over the July 16th arrest of Keith Woody, whose limp body can be seen being dragged from a house, then dropped on the street next to a police cruiser. Officers eventually lift the young man’s unresponsive torso into the backseat of the patrol car as horrified neighbors protest in disbelief and beg for officers to call an ambulance.

“You don’t knock nobody out like that,” one woman pleads. “He’s out unconscious in 100 degree weather.”

“He can’t even stand up,” another bystander yells, as officers dragged Woody’s body into the police car.

“He did nothing wrong,” the crowd shouts.

Even though police assured the public that an ambulance would be arriving, this ultimately was untrue. Woody’s limp body was thrown in the back of the police care, which quickly drove away.

According to the police report, Woody was wanted in connection with an active parole warrant for criminal possession of a firearm and reckless endangerment.

The 22-year old Black man was approached by officers at the intersection of West 127 Street and Lenox Avenue and fled on foot to a building on West 129th Street. He then climbed up to the roof and fled down a fire escape where he was eventually caught.

Between the time he was apprehended and when he and the officers emerged from the building, he had visibly lost consciousness, leading witnesses to speculate there may have been excessive force used during his arrest.
READ MORE: Sherri Shepherd admits son doesn’t like Black girls because they’re ‘mean’

“Seems it took the entire 32nd precinct to arrest a teenager for a probation violation,” tweeted Rebecca Kavanagh, a public defender with the Legal Aid Society. “By arrest, I mean beat him unconscious, drag him along the ground & throw him in the back seat of a patrol car. This is what [Mayor Bill de Blasio] calls #communitypolicing.”
According to video first posted to Facebook on July 17, the alarming optics are what inspired the confrontation between onlookers and the dozens of police officers who responded to the scene.
“Thats mess up what they did to lil man just for a probation violation,” said the poster.

Monday evening, an abbreviated version of the video was uploaded to Twitter and has been retweeted more than 5,700 times as of this writing.

NYPD Director of Communications Peter Donald told Gothamist that Woody was first brought to the 32nd Precinct and eventually taken to Saint Luke’s Hospital for medical observation and attention. Donald could not say whether Woody was conscious or not after arriving at the precinct and could not explain why Woody was not first taken to the hospital.