Eff You, Pay Us: Why EVERYBODY should back Black Womens Equal Pay Day

Since we are constantly saving this country from itself, how about a little support, America? 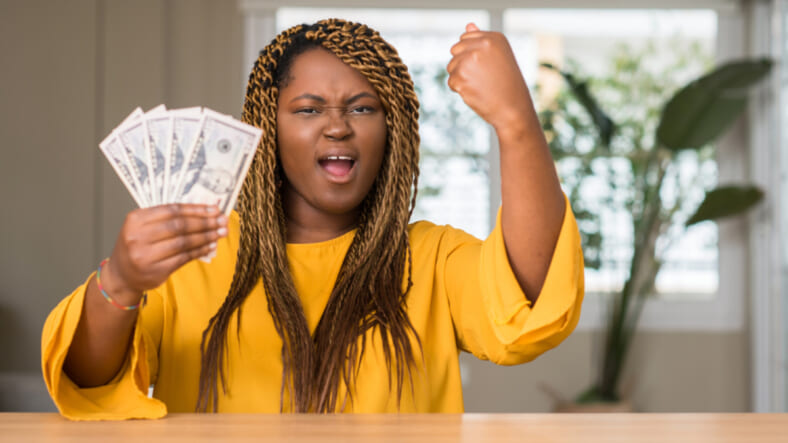 Black women work hard for our money, but we aren't treated as right as we should be. That's why we celebrate #BlackWomensEqualPayDay (Fotooia)

There is no doubt that Black women consistently step up for The Culture and the country.

Think back on the work Black women have done for civil rights including the who-gone-check-me-boo badassery of Harriet Tubman, Sojourner Truth, Rosa Parks all the way up to Congresswoman “Auntie” Maxine Waters. Each of these women paved the way for Patrisse Cullors, Alicia Garza, and Opal Tometi, the trio who created and defined the #BlackLivesMatter movement, fighting for equity in the judicial system and against police brutality.

And, as nobody better ever DARE to forget, especially as we advance toward November’s mid-terms elections, it was Black women who went to the polls during a hotly contested election in a blood-red state. We delivered the Alabama Senate seat win to Democrat Doug Jones against Republican Roy Moore, a neo-Confederate POS, full-grown ass man who has been accused of deliberately targeting teen girls for relationships. Admittedly, the jury is still out on the job Jones is doing thus far, but check it: he is the first Democratic senator to be elected in Alabama in 25 years.

One would think by now that Black women would have earned some sort of reciprocity, some form of thank you for always having to charge directly into the fires blazed by both bigots and sexists alike.

At the very least, one would think that Black women would be paid equally to our (also) underpaid White female counterparts. Yet, here we sit in the Year of Our Lord 2018, having to designate our own Black Women Equal Pay Day because while White women only make 80 cents for every dollar a white male worker makes, we are only pulling in 63 cents on that dollar.

These disparities hit Black women and their families harder than anyone else, according to recently released statistics from the National Partnership for Women and Families organization that quantifies the missing money (as compared to the wallets of White males) as the equivalent of losing two and a half years of child care, three years worth of food for an average family, and over 14 additional months of mortgage and utility bills.

While it’s all well and good that we celebrated #EqualPayDay for all women in April, we have got to concentrate on Black women specifically on Aug. 7. And boldly speaking on behalf of my sisters, I am seeking your support—not excuses.

I’ll start the altar call with our beloved Black men.

Yes, we also know your pay isn’t on par with White men either but you know we ride for you and the causes that affect you most directly (see #BlackLivesMatters above), and we’re with you in your fight for fair compensation. You are our husbands, sons, fathers, uncles and Spades partners, but on this here occasion, we need your voice in the battle to help us; the double minorities.

Next up, a word to our would be-allies, aka White women.

This is not the time to pipe up and let us know that you too have it bad. Mademoiselles, you all are a full 17 cents ahead in this battle and, thanks to Lena Dunham and other dolts, we know that all feminism ain’t equal. Plus, you owe us serious reparations for the contingent within your ranks who actively call the police on Black people for varying so-called infractions, including wearing socks at a public pool, selling bottled water with too much enthusiasm or sleeping, eating (and well existing) on college campuses.

Finally, let’s check the empathy levels of the ultimate earners, aka White men.

Word of warning: don’t come into this conversation talking about how Black women seem to be doing just fine.

While Black women are rising as the most educated group in America, we are also experiencing a glaring lack of career stewardship and mentorship that will help us rise to the corner offices. Only about 11 percent of African American female workers have found internal sponsors willing to take an interest and a guiding hand in their careers, according to a study by the Center for Talent Innovation.

The report, “Black Women: Ready to Lead,” reveals additional disturbing facts, including that Black women feel driven to work with their heads down and with little complaint in order to get along. This results in an internal invisibility that keeps them far away from the already eventual glass ceiling.

That silence about our salaries, whether intentional or nah, ends today. We of the melanated magic should not find ourselves shouting alone. Let’s get loud with our demands on social media with hashtags #BlackWomensEqualPay and #Demandmore, plus carry that fight beyond the Twitterverse until we are earning what we deserve.

Too long have we unfurled our capes and flown headlong into battle for the collective good. It is time for us “strong Black women” to get some reciprocity. Let’s start with these employers forking over every penny to make up for our missing 37 cents.

Kyra Kyles is a multiplatform media executive, author, and speaker on media diversity.  In addition to her 20-plus years as a journalist, including a tenure as Editor-in-Chief of EBONY and a multimedia correspondent/columnist for the Tribune Company, Kyra is the Chicago-based co-founder of content development collective, Myth Lab Entertainment. Follow and feel free to interact with her via @thekylesfiles on Instagram, Facebook, and Twitter.