WATCH: Cardi B opens VMAs by punking everyone with a fake baby

The most nominated artist of the year got a good laugh when she opened the 2018 MTV VMAs. 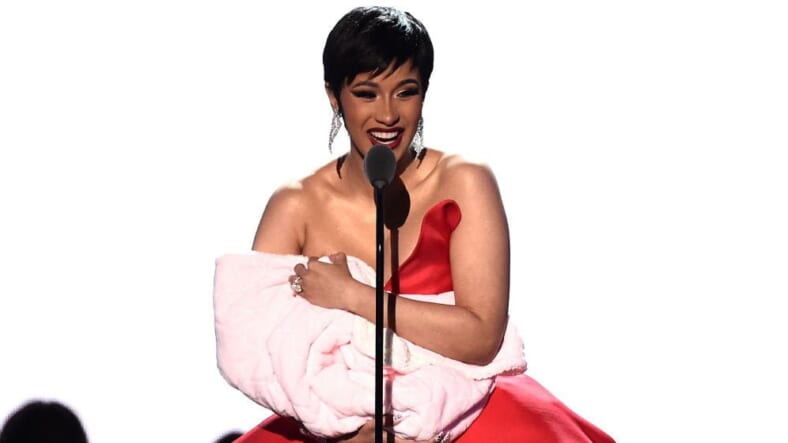 Cardi B has been laying low ever since she gave birth to her daughter Kulture five weeks ago, and she just made her first public appearance since becoming a mother on the MTV VMAs stage.

The artist, who nabbed the most nominations of the night, opened the show from Radio City Music Hall in NYC holding what appeared to be her baby and debuting a super chic pixie cut in a gorgeous red gown.

“I got a little surprise for you,” she said while holding what appeared to be her bundle of joy wrapped in a pink blanket. Then, she unveiled a moon man trophy instead of the baby girl she shares with Migos frontman, Offset.

She also seemed to take a jab at Nicki Minaj whose Queen album landed at No.2 on the charts behind Travis Scott‘s album, Astroworld.

“I’m the Empress. The liberals voted for me. It’s a full house, everybody’s here! No wonder my internet is slow y’all using all the service,” she joked.

If you missed it, check out the clip below:

Cardi B earned herself 10 nominations including artist of the year, song of the year, and video of the year for her collaboration with Bruno Mars, “Finesse (Remix).”

Jay-Z and Beyonce, now known as The Carters, nabbed eight nominations for their latest single, “APES**T.” The power couple is up for best collaboration, best hip-hop, and video of the year for the mesmerizing video that was shot at The Louvre in Paris. No word on whether or not they’ll perform at the show but our fingers are crossed.

“It has already been a monumental year in music, and this year’s ‘VMAs’ will take things to a whole new level,” said Bruce Gillmer, Head of Music and Music Talent, Global Entertainment Group, Viacom. “The extraordinary group of nominees have amazed us with their talent and inspired us with their creativity – and when you get them together for one night, anything is possible.”