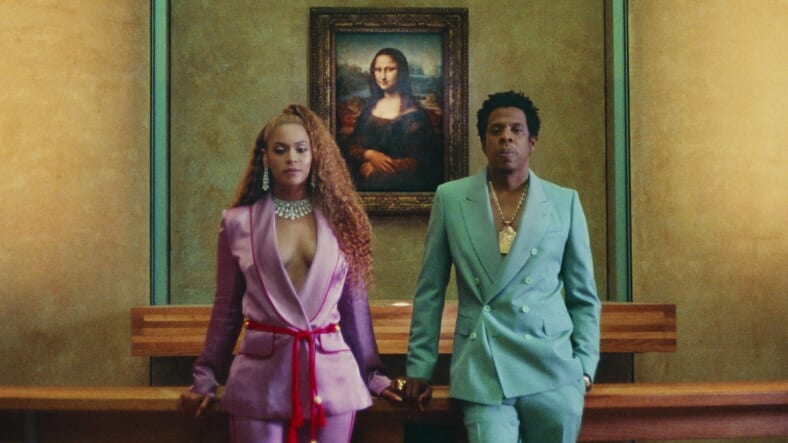 Beyonce and Jay-Z just dropped a joint album Everything Is Love and it is indeed, EVERYTHING.

We thought we had plans tonight but turns out we’ll be busy memorizing the latest release from The Carters now that they have treated fans to a surprise project exclusively on Tidal.

The featured track is “APE SHIT” featuring Migos and Pharrell and the Ricky Saiz-directed music video for the single was shot at the Louvre in Paris in May. The video is a stunning six minutes of splendor that features Bey in so many incredible looks my head is still spinning.

Watching Beyonce rock a spandex Burberry two-piece body suit, a pink power suit, or a gorgeous white couture gown while spitting lyrics that highlight how far she and her husband have come is almost too much to take. The visual features several gorgeous dancers wearing nude outfits and moving in unison, representing nearly every shade we can imagine as well as a black man getting a haircut in the middle of the iconic museum.

Last time we checked, we weren’t even allowed to snap a photo of The Mona Lisa at The Louvre so it’s kind of a big deal that Mr. And Mrs. Carter snagged the location for this masterpiece.

Although we suspected that Beyonce and Jay-Z would release new music ahead of their On The Run II tour, we’re pretty shocked that they decided to drop their first joint project after the tour’s kick off on June 6.

The nine-track album also features a bonus track “SALUD!” that features a cameo from Cool & Dre as well as Blue Ivy. In it, the sweet big sister shouts out her twin siblings Rumi and Sir who turned one last week.

Jay-Z pulled no punches in his verses on the album and takes aim at The Grammys for his major snub this year as well as the NFL. “Tell the Grammys fuck that 0 for 8 sh*t,” he raps on “APE SHIT” before confirming he turned down an offer to perform at The Super Bowl.

“I said no to the Super Bowl / You need me, I don’t need you/ Every night we in the end zone / Tell the NFL we need stadiums too.”

Beyonce goes in on her haters several times on the album and exudes an even stronger and more confident appeal that we have ever heard form her before. Perhaps the knowledge that she and her family have made it out the other side of their tumultuous tunnel has made her even more fearless than before.