Turn OFF her mic: Madonna sparks furious reaction after making Aretha Franklin tribute all about herself 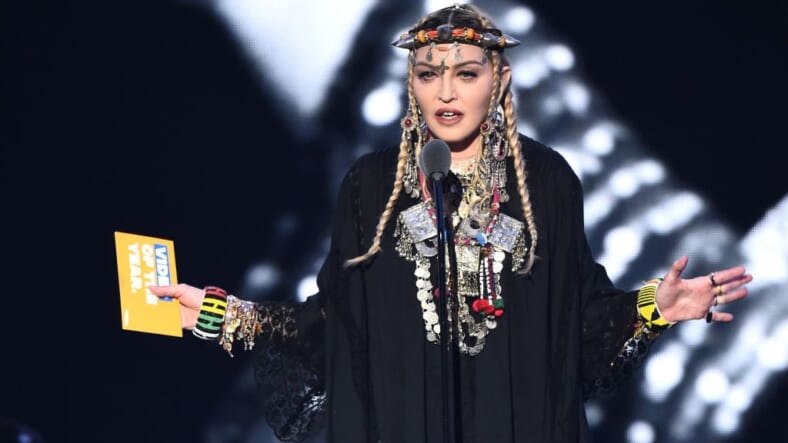 Madonna always one to do the most. (Getty Images)

Somebody needs to make it their full-time job to take Madonna‘s mic away whenever a legend — particularly a Black one — passes away.

Monday night, Aretha Franklin fans all over the world, watched in horror as Madge walked up to the stage at the VMAs dressed like the world’s most over accessorized sheep herder and spent six minutes and 12 seconds of our lives (that we will never get back) telling a convoluted story about her past.

According to the singer, her big break took place at an audition in the early 80’s where she sang Franklin’s version of “(You Make Me Feel Like) A Natural Woman” in a last-minute decision after she had failed to bring sheet music or even prepare another song.

The two French men who she says she was auditioning for (and did incredibly offensive impersonations of sounding more Russian than French) didn’t believe “some skinny-ass white girl” was going to “belt out a song by one of the greatest soul singers that ever lived.” Nonetheless, they were allegedly blown away by her acappella vocal chops, and that’s how Franklin inadvertently “led me to where I am today.”
READ MORE: MTV VMAs 2018 Photos: Beautiful, Black and Blingin’ on the red carpet
“I want to thank you, Aretha, for empowering all of us. R-E-S-P-E-C-T,” she added. “Long live the queen.”

Madonna told the confused audience that her incredibly verbose tale was meant to show the deep impact that Aretha Franklin had on her career. Unfortunately, it felt more like watching someone give their own eulogy, with Franklin serving as an excuse to remind us that Madonna is actually still alive and well.

At one point, I looked to my roommate and said, “Just so you know, if she starts singing, I’m walking TF out.”

And true to my word, I sat there tensely perched on the edge of my couch, prepared to bolt at the mere hint of an aging Madonna’s rendition of Natural Woman.

Luckily, we were all spared that torture, but it still didn’t stop fans (and probably the ghost of Aretha herself) from being all the way pissed off that the Queen of Soul had been dealt such a dumpster fire of a tribute.

The bizarre speech was so off-putting that The Breakfast Club very reasonably crowned Madonna, ‘Donkey of The Day.’ During the segment, listeners were forced to listen to an abridged version of the long-winded fail from the night before. Radio host Charlamagne Tha God, however, made a great point that Aretha died on Madonna’s 60th birthday. Maybe, just maybe, this was her subconscious’ way of getting back at Aretha for overshadowing Madonna’s golden milestone.

All that “tribute” showed us is how out of touch MTV has become over the years in their desperate bid to keep up with the “cool” kids.

I’ll even go as far as to say that whomever came up with the idea to let Madonna take that stage last night, needs to be put on unpaid leave in order to properly do some soul searching and rethink their life choices.

In response to the backlash, Madonna explained she was asked to present the award for Video of the Year at the VMAs and told to “share any anecdotes I had in my career connected to Aretha Franklin.” She asserts that she never “intended to do a tribute to her,” according to a post the singer shared on Instagram.

“I shared a part of my journey and thanked Aretha for inspiring me along the way. I did not intend to do a tribute to her!” Madonna wrote.

“That would be impossible in 2 minutes with all the noise and tinsel of an award show. I could never do her justice in this context or environment.”

Im with the Winner!! The beautiful @camila_cabello ! So proud of her! ???. And just to clarify: I was asked to present video of the year by MTV! And then they asked me to share any anecdotes I had in my career connected to Aretha Franklin! I shared a part of my journey and thanked Aretha for inspiring me along the way. I did not intend to do a tribute to her! That would be impossible in 2 minutes with all the noise and tinsel of an award show. I could never do her justice in this context or environment. Unfortunately most people have short attention spans, and are so quick to judge. I love Aretha! R.E.S.P.E.C.T. ??. I Love Camilla! Congrats! I LOVE my dress! AND. I love-L O V E!! ♥️ and there is nothing anyone can say or do that will change that. #vmas #postivevibes

Let’s keep it real, shall we? This isn’t the first time Madonna has hijacked a moment meant to celebrate a much more talented counterpart artist who had just passed. We still haven’t forgiven her for the way she ruined the Prince tribute on the Billboard Awards in 2016.

Here’s just a taste of some of the most spot on reactions to the cringe-worthy moment that basically completely, without a doubt, 100 percent sums up how we all feel.

Good morning to everyone except Madonna. pic.twitter.com/z6BNnVItJ2

#Madonna is demonstrating a dynamic performance of peak white womanhood. This was not an #Aretha tribute but a monologue on how another iconic Black woman is being reduced to how she helped a white woman.

Enough‼️ Be mad at me if you want. But, we as a nation … must stop letting #Madonna do the tributes to great black music legends. First there was that Billboard debacle to Prince. And NOW … Madonna babbling about Madonna, in that faux #MTVVMAS “#Aretha tribute”. #nomore ?

Fans called out Madonna for making the Aretha Franklin tribute at the #VMAs all about Madonna pic.twitter.com/NezAp02BjF

A reminder that Madonna has four adopted black children whose sense of blackness is being taught to them by what we saw last night.