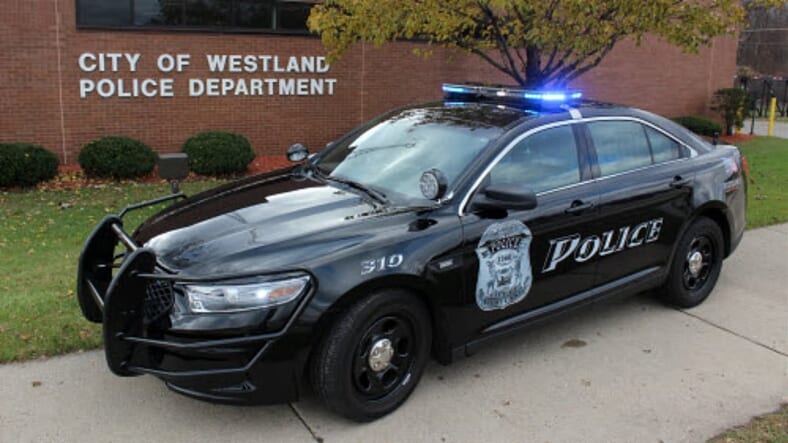 Westland police officers are said to have used a stun gun Roy Brown while he was holding his infant son. (Photo Courtesy of City Of Westland Police Department)

A disturbing video of a father being Tased with a stun gun as he held his two-month-old son tightly in his arms has the Westland Michigan community outraged and a police department on the defense for using the reckless arrest tactic, Detroit News reports.

Westland Police Chief Jeff Jedrusik said that a confrontation with Ray Brown resulted in the father being stunned with several volts of electricity while holding his baby because he allegedly was being “aggressive” and uncooperative when police approached.

Officers received a call that a man, who was later identified as Brown, was yelling and threatening people at a backyard barbecue, according to reports.

Jedrusik said Brown was combative when he learned he was being arrested. He held his baby tightly in his arms—so tight officers believed he would hurt the infant, Jedrusik said. In a video, Brown can be seen, holding the baby while officers order him to give the baby to its mother. Police said that Brown refused causing them to react.

Brown was stunned with the taser while holding the child, but the mother, Nichole Skidmore was close enough to grab the baby as the infant fell from the father’s arms. Thankfully, the baby wasn’t hurt.

“It is important to remember that due to the man’s noncompliance, our officers were faced with a difficult tactical decision,” Jedrusik said during a news conference at police headquarters.

After the cellphone video of the incident was posted. Westland police are now being heavily criticized on how they handled the situation.

“I wasn’t expecting it to get this big,” said Kelvin Williams, who recorded the video.

According to Williams, he and Brown were enjoying the evening, barbecuing with friends and the kids, listening to music when the Westland police came by saying someone reported a fight at the house. Williams said the police used the stun gun on Brown, handcuffed him and then “beat his ass.”

“Someone needs to do something about this,” Williams said in the post showing the video. “I tried to grab the baby [but] the cops push me out the way. I’m so pissed right now.”

Oh my God. Police taser an unarmed, non-violent Black man who was not even wanted for a crime WHILE HE IS HOLDING HIS INFANT BABY.
This is right outside of Detroit in Westland City. A caller called 911 saying people were loud. The caller was nowhere to be found when police came. pic.twitter.com/PkCgivd089

Brown, who had multiple outstanding warrants for his arrest at the time, was arrested  on the spot and charged with disturbing the peace, hindering a police investigation, damage to property, neglect of a minor child, disorderly person, resisting arrest and assault and battery on a police officer.

He was released on Monday and has already secured an attorney who is looking into how the police handled this situation.

“He’s got Taser marks all over him, a boot print on his head,” his attorney, Angela Martin, said. “He’s not acting right. Neither is his baby.”

The original tweet cut off a few words. pic.twitter.com/XdnNQ0mOjE

Jedrusik defended the use of force by his officers saying a stun gun charge does not transfer to another person, so the baby is unhurt.

The incident is still under investigation, Jedrusik said.