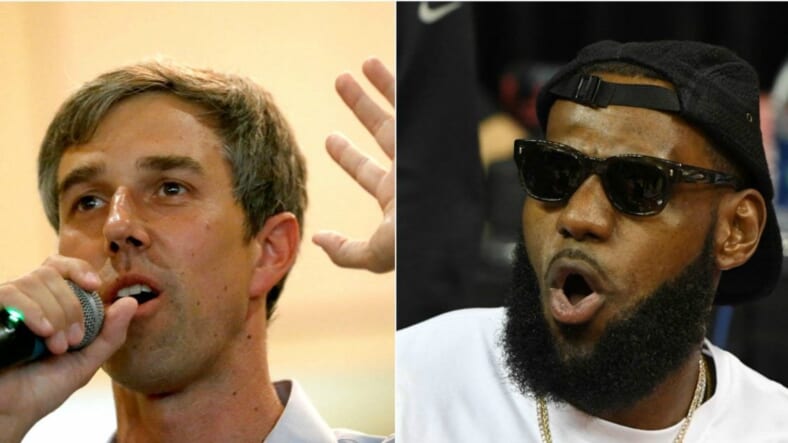 LeBron James commended Senate candidate Beto O’Rourke (D-TX) for standing up and taking up for the athletes who used their platforms to protest racial injustices by kneeling.

O’Rourke’s passionate video speaking out in support of NFL players like Colin Kaepernick who kneeled in protest during the national anthem, and the challenges Black people still face in America, has been circulating widely on social media. Many have called O’Rourke’s statements honorable for driving home the same points Black people have been making all along.

A Must Watch!!! ?????‼️ Salute @BetoORourke for the candid thoughtful words! https://t.co/E1YrbqGciZ

O’Rourke, a Democratic congressman running for the seat held by Sen. Ted Cruz (R), attended a town hall this week and addressed the hot-button issue when asked by an attendee if he felt NFL players were being disrespectful to military vets and the country for launching their silent protests.

O’Rourke’s short answer was no. Then the congressman launched into an ardent diatribe, explaining why he believes the pregame protests are valid. He offered historical context about the sacrifices African Americans made – and died for – from the Selma marches to bus boycotts to other pivotal moments in the ongoing fight for equality.

“The freedoms that we have were purchased not just by those in uniform, and they definitely were, but also by those who took their lives into their hands, riding those Greyhound buses, the Freedom Riders in the Deep South in the 1960s,” he said.

O’Rourke also used the moment to bring light to problems that still persist today like the onslaught of unarmed killings of black people at the hands of police.

“Peaceful, nonviolent protests, including taking a knee at a football game to point out that black men, unarmed, black teenagers, unarmed, and black children, unarmed, are being killed at a frightening level right now, including by members of law enforcement, without accountability, and without justice,” O’Rourke, 45, added.

O’Rourke noted that the problem won’t “fix itself,” and leads to frustration with “people like me, and those in positions of public trust and power, who have been unable to resolve this or bring justice for what has been done.”

Nothing More American Than Peaceful Protest

“And so non-violently, peacefully, while the eyes of this country are watching these games, they take a knee to bring our attention and our focus to this problem to ensure that we fix it. That is why they are doing it,” he continued. “And I can think of nothing more American than to peacefully stand up, or take a knee, for your rights, any time, anywhere, in any place.”

President Donald Trump has yet to come out to speak as powerfully and as eloquently as O’Rourke about the players’ rights to protest injustices. Trump has instead continued his parade of hate and on Tuesday spoke out again against the silent protests at a rally in West Virginia.

At a campaign stop on Saturday, Ted Cruz took a shot at O’Rourke’s comments saying,

“When Beto O’Rourke says he can’t think of anything more American, well I got to tell you, I can.”

In the words of President Obama: Don’t boo – vote!