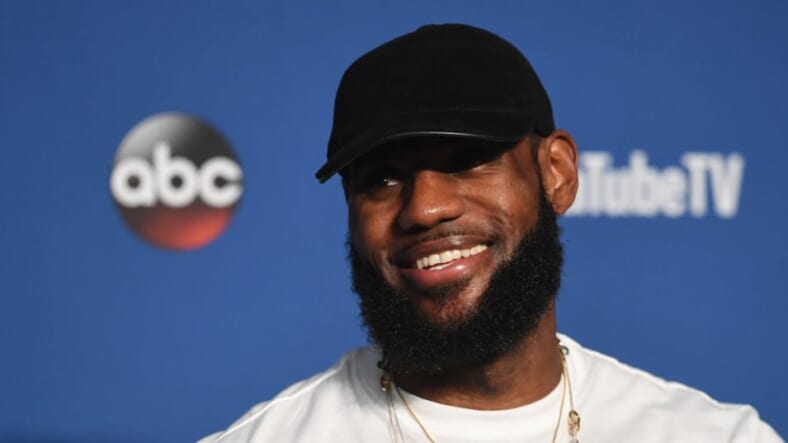 during Game Four of the 2018 NBA Finals at Quicken Loans Arena on June 8, 2018 in Cleveland, Ohio. NOTE TO USER: User expressly acknowledges and agrees that, by downloading and or using this photograph, User is consenting to the terms and conditions of the Getty Images License Agreement.

LeBron James made it official and signed his $153 million dollar Los Angeles Lakers contract, along with Lakers general manager Rob Pelinka by his side, according to the Bleacher Report.

Just a few weeks after Magic Johnson courted James with a late-night meeting to convince him to come to the Western Conference team, Johnson, the president of basketball operations, tweeted out a heartfelt message about the star player signing on.

“Today is a great day for the Lakers organization and Lakers fans all over the world to welcome LeBron James, a three-time NBA Champion and four-time NBA MVP. LeBron is special. He is the best player in the world. He loves to compete and is an awesome leader who is about winning and making sure that his teammates are successful. The Lakers players are excited to have a teammate who has been to nine NBA Finals. It’s a huge step closer to returning the Lakers to the playoffs and to the NBA Finals.”

The Lakers franchise has been lagging and Johnson knew if he could convince James, who had recently become a free agent, to join the Lakers franchise, then it would be a match made in heaven on the Lakers home court.
So, Magic, met up late Saturday night, at the home of the superstar athlete and hunkered down and discussed the common ground the two powerful men shared.

He said he just needed to look James in the eye. And he knew if he could do that, he could make a deeper connection.

It was a done deal. Magic truly made magic happen when he convinced James to sign on as a Laker, therefore tipping the balance of power and steadying the team that has suffered for the last five years with infighting, bad contracts and missing the playoffs, reports the LATimes.