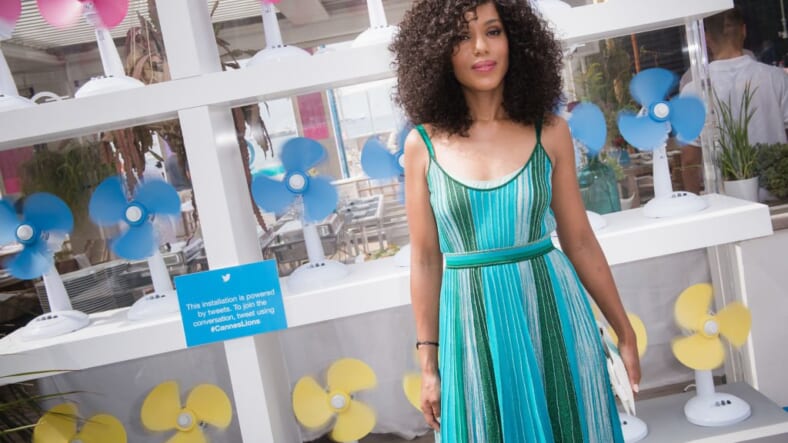 Kerry Washington is passionate about her skin care and admits looking flawless requires a beauty regimen with must-have items that keep her looking fresh-faced and fabulous.

Washington is the creative consultant for Neutrogena and she recently spoke with Essence about the beauty brand and offered up some ageless tips upon the release of her second makeup collection with Neutrogena called Force of Nature Palletes. The must-have line includes five shades of deep, warm, and rich earth tones. And the former Scandal star is even more excited about the beauty collection the second time around.

“This is my second collection with Neutrogena. The first was more of an essentials collection, and I’m obsessed with it still,” she gushed to Essence.

Going from day to night in an effortless way was Washington’s focus and she wanted the nighttime look to be more daring.

“But for the second collection, I was like we gotta find a little more drama. People always think about Neutrogena as being a line that puts health and wellness at the forefront, so there’s a commitment to natural beauty in everything that we do. But there’s also a lot of drama in nature. So we started looking for more deep and warm and rich earth tones, so that the look is a bit more dramatic, yet still feels natural.”

And for all those lamenting the loss of our favorite gladiator now that Scandal has ended have no fear because the award-winning actress has several new projects in the works.

Washington has been tapped to produce the Hulu streaming series Old City Blues about a corrupt dystopian society set in 2048.

Old City Blues is a futuristic story set in New Athens atop the remnants of Greece, filled with high-tech bad guys, smugglers, drug dealers and corrupt politicians, according to the Daily Mail.

The premise of the show reportedly revolves around a special police force trying to keep the city from being over run by criminals after the founder of a tech company is killed.

But exactly what role Washington will assume, remains a mystery for now. But it sounds like being a fixer again, would fit the bill.

Reese Witherspoon and Washington also recently announced they are teaming up for a limited series, Little Fires Everywhere, based on the best-selling book by Celeste Ng.

In the book, two families come to know one another through their children and must pick sides in a surprising custody battle.

And in October, Washington will stretch her acting chops and head to Broadway to star in American Son and she also just landed a pilot order at ABC for comedy Man of the House starring Alyson Hannigan.