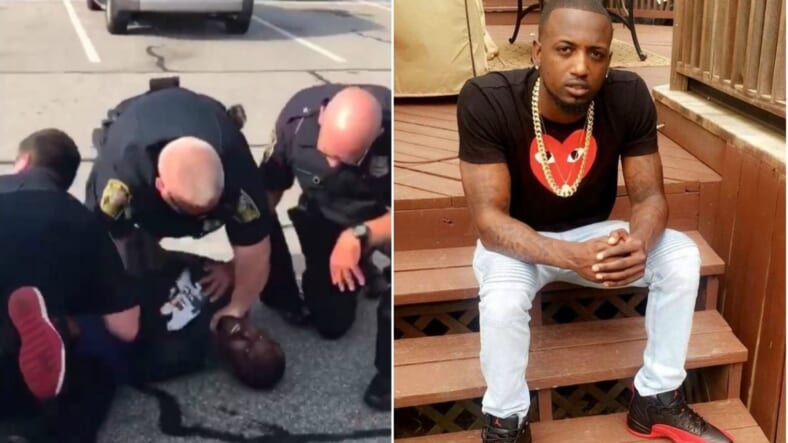 The AJC.com reports that the officer, whose name has not been released, choked Desmond Marrow while he was in handcuffs. The brutal assault occurred after officers responded to an alleged road-rage incident involving Marrow.

The disturbing video that made the rounds on Facebook showed former NFL player Desmond Marrow lose consciousness as police officers violently wrestled him to the ground and choked him.

In the video, you can hear Marrow say “I’m not even doing nothing! I’m not even fighting back!” His hands are handcuffed behind his back as two police officers slam him up against a truck and ultimately throw him to the ground head first.

A third officer arrives as Marrow begins to cry and once again note that he had not done anything. At one point he says “You slammed me on my f*cking head!” Marrow is lying on the ground on his side. One of the officers places his hand over Marrow’s throat and squeezes.

Marrow wheezes “I can’t breathe” multiple times and then goes limp. His eyes close. Marrow is motionless on the ground as one officer says “Settle down, just relax.” After a few seconds an officer pats Marrow on the chest and asks “Are you okay?”

It appears that Marrow’s eyes flutter a bit and then close again. At the end of the undated one-minute video, the officers can be seen ordering Marrow to sit up as they yank his arms forward.

A legal team took up the case after the shocking video was posted. The rally at Tabernacle of Praise Church International, where Marrow is a member, was called to put the pressure on the Henry County police department to fire the two officers involved.

“We are transferring the misdemeanor charges to the Office of the Solicitor-General for review,” District Attorney Darius Pattillo said. “We have reviewed the police reports, witness statements, 911 calls, audio and videos, as well as interviewed witnesses, and determined there is insufficient evidence to present any felony charges to a grand jury.”