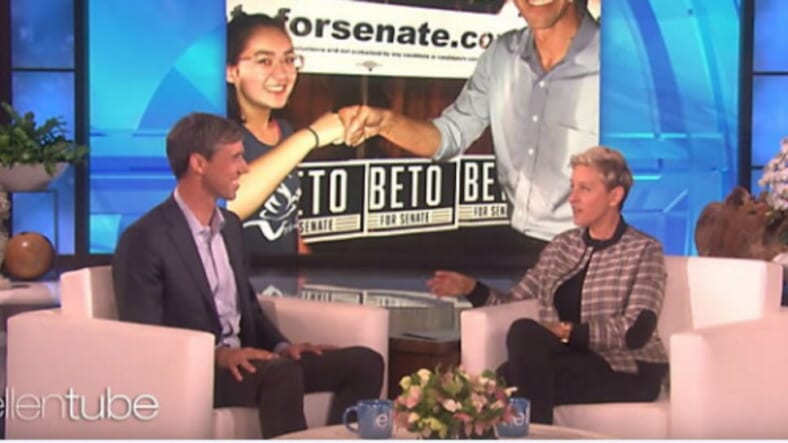 On Wednesday, Texas Senate candidate Beto O’Rourke opened up on The Ellen DeGeneres Show about his passionate town hall speech giving his thoughts on the NFL protests against police brutality that went viral.

“Yeah, some people were upset, and I tried to say at the outset of the answer — listen, you can come to a different conclusion on this. It doesn’t make you any less American,” O’Rourke told DeGeneres.

“But it’s hard to think of a major or important or significant change that we’ve made as a country that wasn’t painful, that didn’t require these difficult conversations.”

He added, “These unguarded moments with one another ultimately produce change and progress in the right direction. And so, I hope, in some small way, we’ve contributed to that in the conversation that we’ve had that’s been shared now. And also, in this campaign that we’re running, not against anyone, not against a political party, but for this country at this moment of truth. This moment will define us I feel forever.”

Beto O’Rourke, a Democratic congressman running for the seat held by Sen. Ted Cruz (R), attended a town hall and was asked if he felt NFL players were being disrespectful to military vets and the country for launching their silent protests.

O’Rourke offered historical context about the sacrifices African Americans made – and died for – from the Selma marches to bus boycotts to other pivotal moments in the ongoing fight for equality.

“The freedoms that we have were purchased not just by those in uniform, and they definitely were, but also by those who took their lives into their hands, riding those Greyhound buses, the Freedom Riders in the Deep South in the 1960s,” he said.

O’Rourke also spoke out against the murder of Black people at the hands of police.

“Peaceful, nonviolent protests, including taking a knee at a football game to point out that black men, unarmed, black teenagers, unarmed, and black children, unarmed, are being killed at a frightening level right now, including by members of law enforcement, without accountability, and without justice,” O’Rourke said.