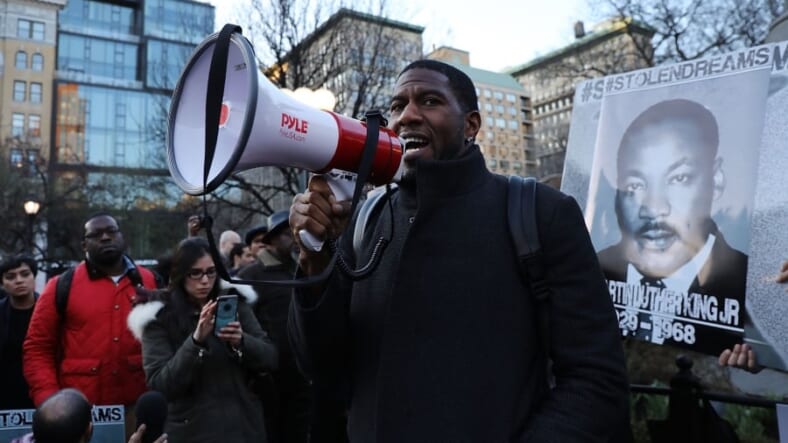 It’s a primary day in New York, but Jumaane Williams is preaching the promise of a new way of getting things done in the Empire state if he becomes the next lieutenant governor.

Williams, 42, a New York City councilman represents just one of the many Black candidates across the country who are stepping up to challenge establishment politicians by running for office.

He’s on the ticket with “Sex and the City” actress Cynthia Nixon, who is running for governor and challenging two-term incumbent Governor Andrew Cuomo.

This morning, Williams posted on Instagram, hyping up his followers and telling people, get out the vote.

Never heard of the guy? Time to get your facts straight and add him to your radar. Here are five things to know about candidate Jumaane Williams:

Williams isn’t new to the political landscape and has been involved in politics for more than a decade, becoming a New York City council member in 2009. In 2016, he was awarded the title of the “Most Productive Council Member” in a 51 member body. Throughout his tenure, Williams has spoken out against “Stop and Frisk,” advocated for affordable housing, and created laws for gender neutral bathrooms.

My campaign was launched on a cold morning in January on the Steps of City Hall. W/ the primary election tomorrow, we’re going back to where it all began today to celebrate what we’ve accomplished

Join me for a rally at City Hall today & don’t forget to vote TOMORROW!#Jumaane4NY pic.twitter.com/IW3csPSkZ7

2. He’s been outspoken about police brutality and criminal justice reform

A major tenet of Williams’ campaign is to end mass incarceration and unequal treatment of people in color in the criminal justice system. He wants to end cash bail systems and provide more mental health and drug treatment options as alternatives to incarceration.

The impression of the tragedy that took place on #Sept11th, and the lives of those lost, will forever be remembered in our minds, hearts, and history

We honor all those lost and those suffering illness because of their courage on that day #911Anniversaryhttps://t.co/h8raQ3kNOp pic.twitter.com/lNjfYyHHTV

3. He was a community organizer before he was a politician.

Williams fought hard for tenants rights and pushed back against the effects of gentrification in the city.

This past January, Williams was arrested for blocking an ambulance at an immigrants rights protest, which was an attempt to deport an activist.

He has also sponsored a “Ban the Box” bill, which ensured that all New Yorkers, including those with convictions for previous mistakes, will have an equal opportunity to compete for qualified jobs.

To round out our #5BoroughTour, we joined @RitchieTorres in the #Bronx to meet with local residents to discuss ways we can combat #CuomosHousingCrisis.

I’m proud to have your support! pic.twitter.com/6VMecmB2M7

The New York Times called him “independent-minded” and said he’s “shown that he can be a real leader.”

I’m proud to be supporting @JumaaneWilliams for Lieutenant Governor of New York. Jumaane has dedicated his life to fighting for justice, equality and dignity for all and is a champion for the working class. https://t.co/mniyCaxTTD

Williams can also be seen at protests openly supporting the legalization of marijuana stating “Legalizing marijuana is SMART for racial injustice.”

He says by legalizing marijuana, it will benefit the state of New York economically and will benefit more citizens and not just those who take a puff puff pass. He also plans to remove the criminal records of those individuals who have been charged for participating in the marijuana industry.