Our favorite stars hit the red carpet in style on television's biggest night. 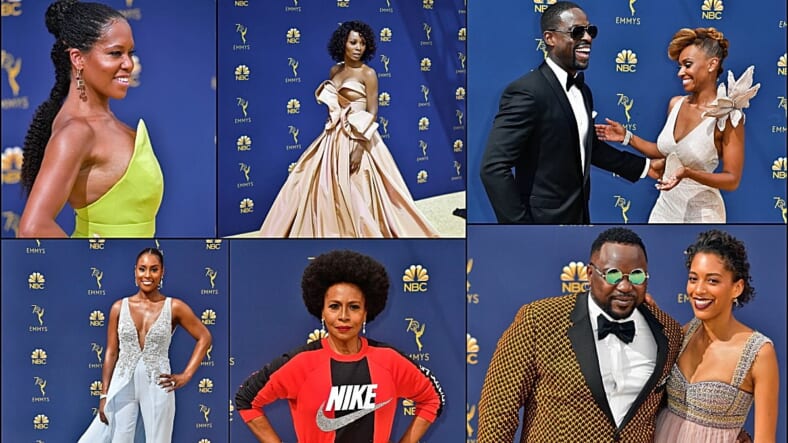 Some of the biggest stars on television (and streaming services) are getting ready to battle it out live from L.A.’s Microsoft Theater for the 70th Emmy Awards. If the red carpet is any indication, the evening is going to be one to remember.

While everyone else is pondering which awards HBO’s Game of Thrones will take home (leading with 22 nominations, the most of any outlet) or NBC’s Saturday Night Live and HBO’s Westworld (with 21 nominations each), we’ll be looking at nominees like Issa Rae, Tiffany Haddish, and Sterling K. Brown to take home a statue.

Check out some of the amazing looks from this year’s event.

The Insecure creator is up for her first Emmy Award for Best Actress in a Comedy Series and she celebrated with a star-studded yacht party over the weekend. She landed on a beautiful embroidered gown/pant ensemble with plunging neckline. 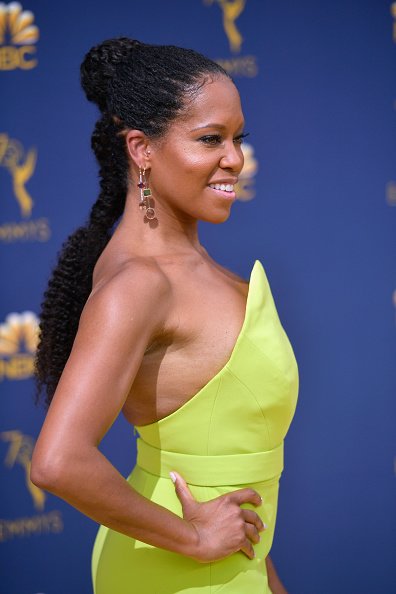 The Seven Seconds star who is up for Best Actress in a Limited Series or Movie for her incredible turn as a grieving mother in the stirring Netflix series jumped on the neon trend with her bold gown.

The This Is Us star showed up with his gorgeous wife, Ryan Michelle Bathe whose stunning avante garde gown and beautiful up do had jaws dropping. Brown is up for Best Actor in a Drama Series as well as Guest Actor in a Comedy Series.

The Atlanta star posed with Xosha Roquemore in a dapper white tux and proved that he is capable of pulling off a polished look on the carpet for once.

The Insecure star showed up to celebrate the show’s big night in a long black gown that channeled old Hollywood glamour.

The black-ish star and self-proclaimed Godmother of Hollywood wore Nike on the gold carpet in support of Colin Kaepernick.

The Atlanta star chose to wear a printed tuxedo jacked and shades on the gold carpet and we’re loving his off-center look. 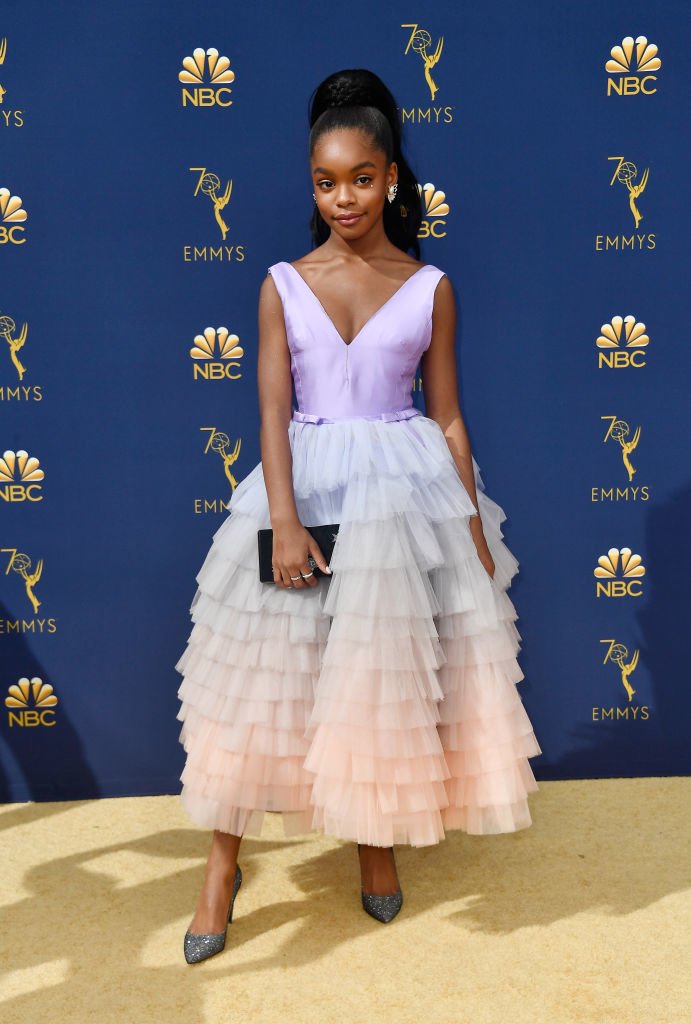 The lovely 14-year-old black-ish star wore a multi-colored tulle dress that looked like something right out of her favorite fairy tale. 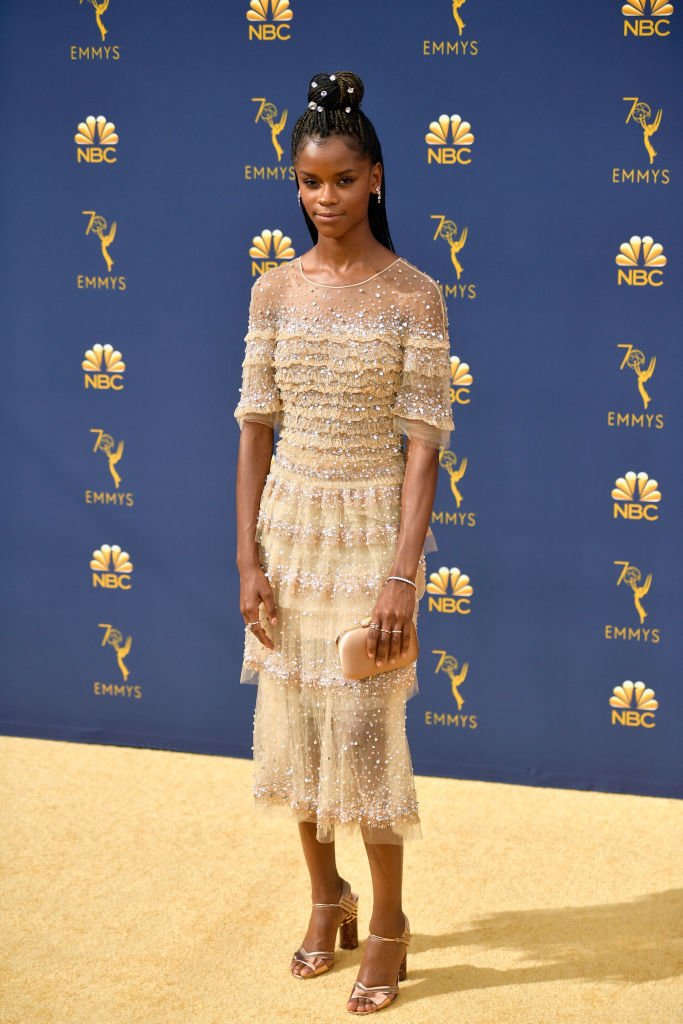 Black Panther star Letitia Wright showed up in a 3/4 sleeved, 3/4 length gown and we’re not sure we’re loving her look as much as we love her acting skills. The British beauty is nominated for Best Supporting Actress in a Limited Series or Movie for her role in Black Museum.

The comedienne who already nabbed an award for Guest Actress in a Comedy Series for her hilarious stint on Saturday Night Live wore a multicolored gown on the gold carpet and she’ll present an award alongside Angela Bassett.

The couple looked well-rested for new parents and dazzled on the gold carpet as usual with Teigen telling jokes and Legend graciously discussing joining the EGOT club.

The actress/TV personality was a vision in red when she hit the gold carpet in a one-shoulder gown and tons of bling.

The black-ish star was certainly not going for subtle when she selected her fuchsia gown with huge sleeves and paired it with bright-colored eye makeup.

The comedian wore a pin-striped suit and old school shoes when he walked the gold carpet. The funnyman has been nominated for two Emmys in the past but is just on deck to present this year.

The 16-year-old star of Stranger Things wore an all white ensemble and showed off his winning smile when he hit the gold carpet. His hit Netflix series is nominated for four awards including Best Drama Series.

The actress who’s up for Best Supporting Actress in a Limited Series or Movie for her role in American Horror Story wore a canary yellow silk gown and carried a gold clutch when she hit the gold carpet.

The Orange Is The New Black star already snagged a win for her guest role in The Handmaid’s Tale looked gorgeous in shimmering silver gown and simple silver clutch.

The Saturday Night Live star wore a one-button, iridescent suit by Christian Siriano, her go-to designer when she needs something eccentric.

The Westworld star showed off a newly-bald look and are a traditional tuxedo when he hit the carpet. The actor is up for Best Actor in a Drama Series for his mind-bending role in the hit HBO show.

The hilarious actress was all covered up in a black, lace gown and she brought her best one-liners with her so she could help out co-host Michael Che, throughout the night.