RuPaul gave an inspiring speech at the annual awards show. 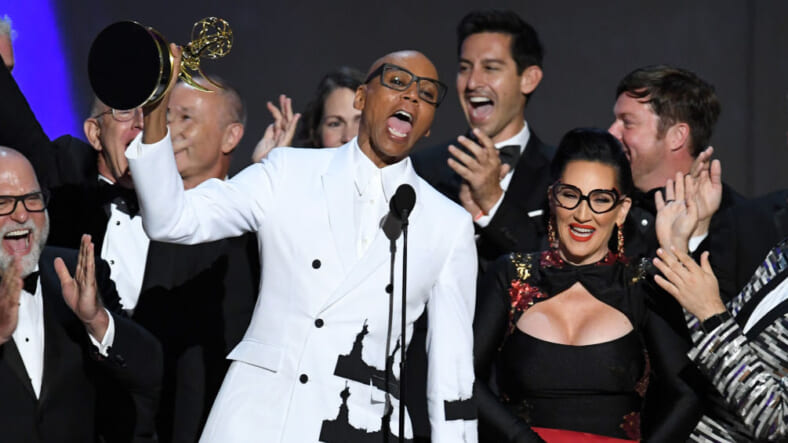 The 70th annual Emmy Awards took place in Los Angeles on Monday night, and we were a bit disappointed by the lack of color in the winner’s circle.

Despite the fact that this year’s event boasted a record number of Black nominees, with 29 actors of color up for a coveted award, less than a handful of Black folks actually nabbed a trophy.

One of them was RuPaul, whose hit series, RuPaul’s Drag Race, took the top honor for Best Reality Competition Series. He took the stage in a white suit and bright red shoes with his huge team of collaborators behind him before delivering an inspiring acceptance speech.

” All of the dreamers out there, listen. If you can’t love yourself how in the hell are you gonna love somebody else? Can I get an Amen up in here? Now let the music play!”

RuPauls’s Drag Race beat out a long list of worthy contenders for the Emmy including American Ninja Warrior, Project Runway, The Amazing Race, The Voice, and Top Chef.

This year’s Emmy Awards only churned out a couple of Black winners and left several fan favorites without a trophy. Late year’s Best Actor in a Drama Series winner, Sterling K. Brown, was beat out in the category this year and first year nominee, Issa Rae went home empty-handed after being nominated for her lead role in Insecure. Regina King took home the award for Best Actress in a Limited Series or Movie for her role in Netflix’s Seven Seconds and Thandie Newton won an Emmy for Best Supporting Actress in a Drama for her work in HBO’s hit, Westworld.