This marks the third Emmy win for the actress. 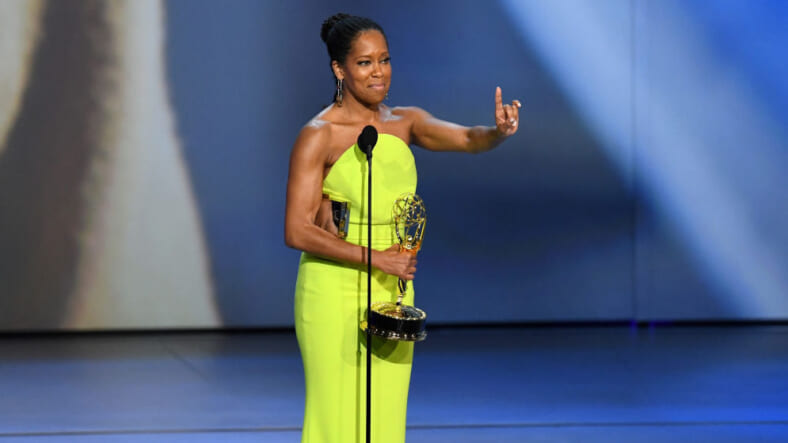 The 2018 Emmy Awards were a bit of a snooze fest until Regina King won the award for Best Actress in a Limited Series or Movie for her stirring role in Seven Seconds.

The actress starred in the Netflix series as grieving mother, Latrice Butler, who is seeking justice for her son who was killed by a police officer.

This is the third Emmy win for the actress who nabbed two awards for her work on ABC’s American Crime in recent years.

EXCLUSIVE: Clare-Hope Ashitey on her ‘Seven Seconds’ role and race relations in the UK

Regina King was visibly shocked by the win and delivered a heartfelt acceptance speech.

“I wasn’t really expecting this but I am so gateful, TV Academy,” she said after making her way to the stage. She thanked the series’ director, Veena Sud, as well as Netflix “for creating an opportunity to tell a story, hold a mirror up to what’s going on today.”

The thrilling crime series explored the human stories behind the headlines that permeate today’s news cycle. The 10-episode series is sure to keep viewers on the edge of their seats until the very last episode and is sure to ignite a range of emotions from fans who will be forced to ask themselves some tough questions about right, wrong, and the ways we reconcile horrific events.

In an instant, life is forever changed for Brenton Butler (Russel Hornsby) and his family. He and his wife, (Regina King) are in for a gut-wrenching ride after a white cop accidentally hits and critically injures their teenage son. A city explodes with racial tensions after an attempted cover up and an explosive trial.

“Thank you. This is amazing. I want to curse right now,” she said. “This is good. Thank you, Jesus.”