OPINION: Is #MeToo still for #UsToo?

McDonald’s workers protests should be trending as highly as Hollywood harassment.

Kyra Kyles
McDonald’s workers, joined by other activists, protest sexual harassment at the fast-food chain’s restaurants outside of the company’s headquarters on September 18, 2018 in Chicago, Illinois.(Photo by Scott Olson/Getty Images

Despite the howls of some Black folks over the pop culture implosions of Bill Cosby and Russell Simmons and a trickle of support for former movement leader-turned-accused actress Asia Argento, there is one undeniable common thread between most of the public-facing villains felled by #MeToo and #TimesUp.

Deposed CBS chief Les Moonves, movie mogul Harvey Weinstein and actor Kevin Spacey are all White men. As fate would have it, the blinding Whiteness of the accused is mostly matched by most of their victims.

This has to change because, news flash, the disproportionate mistreatment and abuse of women in the workplace is not confined to just the casting couch.

Earlier this week, a McDonald’s protest served as a litmus test for the all-too rare intersectionality of feminist efforts. On Tuesday, golden arches employees across 10 U.S. cities lodged a one-day walkout to decry virulent workplace sexual harassment they say is forcing some of them to cut back hours or quit much-needed jobs altogether.

A number of those speaking out— including movement organizers and fast food workers’ advocacy union Fight for $15—say the corporate giant is not doing nearly enough to prevent retaliation by accused harassers nor are they showing adequate support for victims.

Yes, the Times Up legal aid fund has thrown financial backing behind the cause.

Yes, the #MeToo hashtag (ahem) co-opted by Alyssa Milano from the incomparable Black activist Tarana Burke is being deployed to get it trending in our timelines.

Yes, politicians are joining the fray, including U.S. Senator Bernie Sanders who supported the 10-city strike from his Twitter platform.

Yet, in scanning the headlines and socialsphere, it feels like there was much more coverage, conversation and urgency around “Predator” star Olivia Munn’s one-woman crusade against her own director for casting a registered sex offender (and his friend) in a now-deleted scene of the film. Though I commend Munn for publicly taking on filmmaker Shane Black, the studio and some of her too-silent male costars for this abhorrent hiring decision, many more people stand to be impacted and affected by the cause that has McDonald’s workers standing up and walking out. 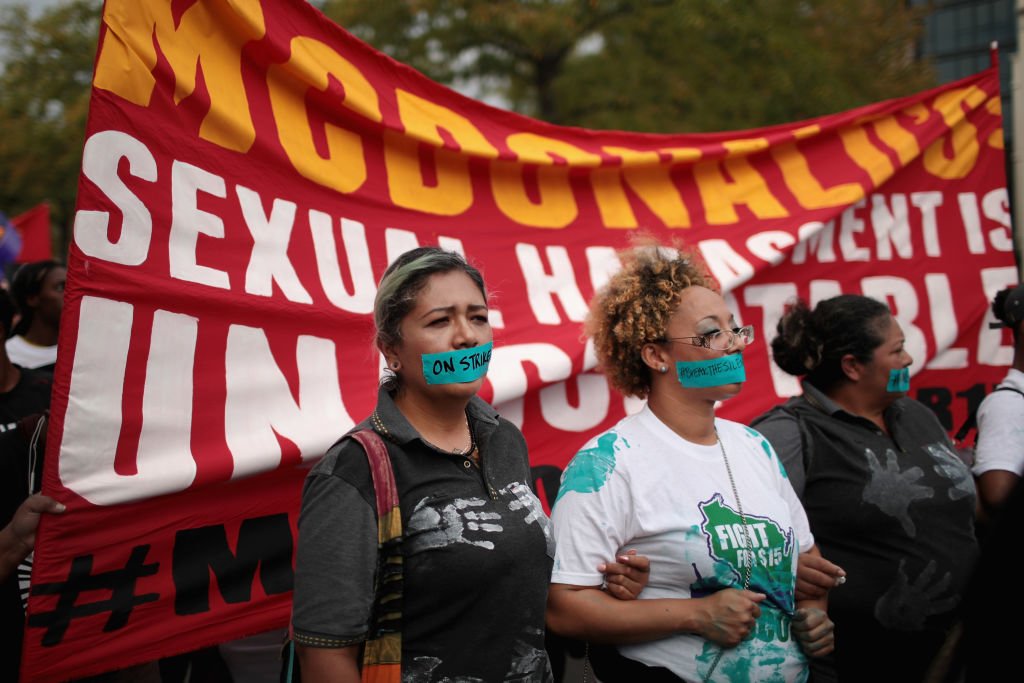 McDonald’s workers are joined by other activists as they march toward the company’s headquarters to protest sexual harassment at the fast food chain’s restaurants on September 18, 2018 in Chicago, Illinois. Similar actions which took place around the country and were touted as the first-ever nationwide “strike” against sexual harassment in the fast food industry. (Photo by Scott Olson/Getty Images)

Even Hollywood denizen and deserver-of-all-acting-awards Viola Davis is all too aware of the disappointing disparity between who is benefiting from celebrity-sanctioned hashtags. The bastion of #BlackGirlMagic argued for more inclusion in a recent interview with Variety. Of those she’d like to see assisted, Davis named victims such as a “15-year-old girl from Lawndale, Chicago, who’s been sex trafficked and doesn’t even have the language or the knowledge to get herself out of that situation.”

Added Davis: I’d like to see her being saved.”

Low-wage workers, a group with a strong cross-section of women and people of color, are reportedly being subjected to subhuman treatment. Not to belittle the worthy cause of stamping out harassment in fields including film and television, the penalty for accusers in the McDonald’s case can’t be understated.

Publicly embracing #MeToo or #TimesUp, even in this amenable call-out climate, could translate to losing the ability to feed and house themselves and their families. This is a reality that cannot be ignored. What’s at stake are the many cooks, cashiers and those who remain invisible in the workplace.

Kyra Kyles is a nationally known multiplatform media executive, author, and speaker on media diversity.  In addition to her 20-plus years as a journalist, including a tenure as Editor-in-Chief of EBONY and a multimedia correspondent/columnist for the Tribune Company, Kyra is the Chicago-based co-founder of content development collective, Myth Lab Entertainment. Follow and feel free to interact with her via @thekylesfiles on Instagram, Facebook, and Twitter. That is, unless you’re some kind of troll or a card-carrying member of #LawrenceHive.