EXCLUSIVE: Amandla Stenberg and Amma Asante on ‘Where Hands Touch’

The actress and director discuss their stunning period piece. 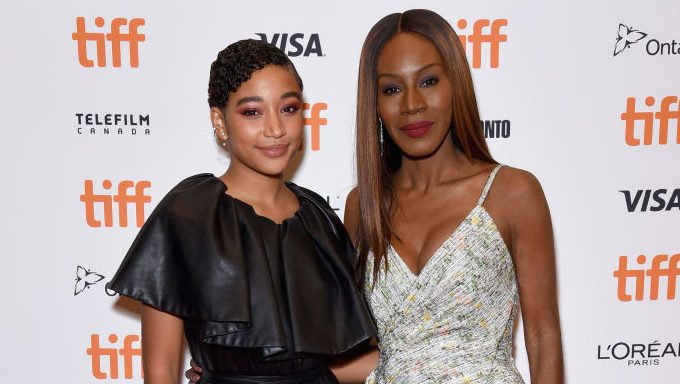 If you saw Belle, the 2013 film starring Gugu Mbatha- Raw, then you’ve already seen the way Amma Asante beautifully captures a rarely illuminated truth; Black people have many histories, and deserve a place in European period pieces. The director has done it again with her latest project, Where Hands Touch and in it, Amandla Stenberg proves she’s a force to be reckoned with.

The film stars Amandla Stenberg as Leyna, a 16-year-old girl born to an Aryan mother and Black father during World War II. In Nazi Germany. Known as the Rhineland Bastards, around 25,000 bi-racial children born to Black, French soldiers during World War I were tolerated in varying degrees, some forced into work camps with while others got by as long as they were sterlized.

The film follows Leyna as she navigates a love affair with a German boy whose father is a high-ranking Nazi official. Their star-crossed love is doomed from the start, and ultimately leads to dire results. Though her journey, Leyna struggles with the duality her existence presents and Asante is able to tackle issues that continue to exist today.

“I wanted to tell this specific story because its a very shorthand way of exploring double consciousness and duality. These are elements that exist within all of us. People don’t always recognize that double identity that people carry around,” Asante told TheGrio during an exclusive interview. “This film was my passion and my love.”

Amandla Stenberg gives an incredibly impressive performance full of subtle, powerful, realistic moments that captured the moments of fear, courage, and strength that her character possessed.

“Amma was such a powerful, guiding hand and she would challenge me if she felt I wasn’t depicting truth. It’s easy to overplay scenes like this. This taught me how to make intentional choices. It was about the truth of the scene,” she explains.

“All of the things Leyna experiences are the products of racism and persecution but to a child who is enduring it, they’re also just facets of life. You don’t always approach it as an example of systemic persecution, but it’s more about a child being observant of their environment because they recognize that they have to be.”

Amandla Stenberg is also starring in The Hate U Give explained that although Where Hands Touch highlights a very specific story about a bi-racial teen in Nazi Germany, its core is rooted in issues she has dealt with in her own life.

“I think its an instance of adolescence placed in a context that is absolutely absurd so it’s a heightening of all those dynamics that already exist when you’re a teenager. Lena wanting to belong so badly and because of her internalized racism, she clings so intensely to the part of her that makes her belong. She has a naive perception of it, at least one that is not inclusive of all the parts of her. She doesn’t have the ability to have a different perception until it is challenged by the reality of this terrifying time in history,” she says.

Stenberg connected with Leyna’s journey in more ways than one, particularly her desire to find belonging while being internally conflicted and confused.

“Obviously, I live a bi-racial experience and I did have feeling growing up of ‘What community do i belong to? Who do I identify with? What do I do when no one else looks like me?’ I think that there was a point in time when it was easier to “otherise” yourself to distinguish yourself from your peers and your community. It’s almost a survival tactic that we do as children,” she says.

“There were times I separated myself and tried to distinguish myself and what I was to fit in depending on what environment I was in. As I grew older, I was confronted with all the complexities of race and identity and community and I understood that I live the experience that I do and I exist at an intersection that is complicated but really beautiful. I think thats the conclusion Leyna comes to. She says she and her child will be evidence of all they’re trying to deny. What they’re trying to deny is love. A love that exists beyond all boundaries. As a bi-racial person, I know I’m evidence of that, of love that transcends boundaries.”

Where Hands Touch is in theaters now.