The Afro-Latina actress has been upped to series regular for the show's fifth season. 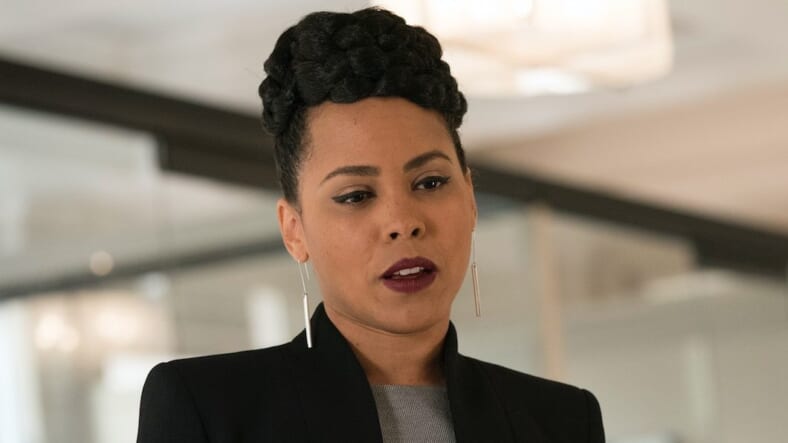 How To Get Away With Murder is gearing up for the season 5 premiere and we caught up with one of the series’ newest regulars, Amirah Vann.

The Afro-Latina beauty plays Tegan Price, the no-nonsense attorney for Caplan & Gold who has decided to become an FBI informant after some coaxing from Annalise Keating (Viola Davis.)

We caught up with the Underground alum to find out how she sees her role evolving and why it’s so important to her to bring authentic representation to the small screen.

“The beauty of Shondaland and Peter Nowak, the creator is that they exercise the entire human being. I would like to feel that her sentiment is justice. That’s what I took away from it, but I don’t know the script until I see it in front of me. To me, she’s a real woman trying to do the best that she can. She wants to start her own firm and wants to hire other women of color so I think that’s a hint about her goals and the sacrifices she has made,” she told TheGrio in an exclusive interview.

SNEAK PEEK: Viola Davis in ‘How To Get Away With Murder’ Season 5 trailer

“She does make the choice to say, “I’m in,” but that does put a pause on her starting her own firm which was about to happen. We’re grappling with her choice and she knew it was the right decision, but at the end of the day balancing that with her own dreams… how does she resolve all of these feelings? Is she a villain at heart with her own goals or is she going to be a great team captain? We shall see.”

According to Amirah Vann, playing a powerful woman isn’t always as easy as she makes it look.

“The reality is that it’s a beautifully written role where Tiegen gets to stand in her power and really be a leader. She’s a partner, she’s a savant, and that’s wonderful. I have to stand in the middle of the room and take charge and it was uncomfortable. The reality is, we have always been powerful as women, but we have been powerful in a quiet, sitting at the back of the bus kind of power. That’s the power that we have been allowed to have,” she explains.

“To be able to actually stand in this power is a wonderful gift and a wonderful challenge. Even myself as an Afro-Latina woman, I have realized there are things that I have to overcome to play this role. It means coming with a certain preparedness. Where we differ is that she’s just so comfortable in her own skin. She’s such a boss. I’m glad to be paying that price to learn this in my journey as a woman. I prefer the scenes when it’s an intimate conversation between two people and now it’s time to make it just as easy to stand in front of a room of men and be in charge. It’s important, it’s valid, it’s worth it and I’m worthy. The more authentic we are to ourselves, the better the world is for it. That’s such a gift to give to myself and hopefully it will inspire others. To learn from Viola Davis and see how she stands in the middle of the room and commands that authority is an amazing opportunity. It’s something we need to see on television so women can feel more empowered to take stake and give their opinions and own it.”

When Tegan Price walks onto the scene, it’s hard not to notice her stunning aesthetic and Amirah Vann revealed that certain style choices were extremely important to her.

“Our costume designer is fantastic.There is something about Tegen where her style is just as specific as the character is. Tegan is more together than I am in real life. She’s not afraid of being seen and I think that’s a part of her power and I love that about her,” she says.

“I really fought for her to have natural hair styles and fought against using heat products in my hair because that’s a big thing. I love that Pete [Nowak] has been receptive to that.”

Vann recognizes the importance of representation and knows that when women of color see themselves on the small screen, the impact is huge. That fact prompted the actress to make sure she’s always rocking her natural hair while killing it in designer ensembles.

“There are young girls being kicked out of school today because of styles that are traditional and beautiful and they are being shamed and that has to stop. It’s unacceptable that these kids are going home in tears and being shamed for something like that. We can show more of America that there are professionals who look different than you and you have to get over it. Hair has become an opportunity for people to express their biases and their fears and we have to put a stop to that. It’s a small little detail that touches upon a larger conversation that I’m happy to be a part of.”

How To Get Away With Murder returns to ABC on September 27.