Atlanta has the worst income inequality in the country 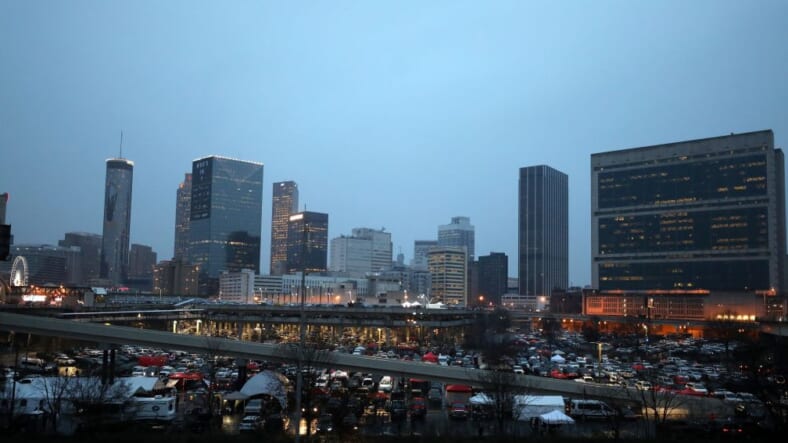 ATLANTA, GA - JANUARY 08: A general view of downtown Atlanta prior to the CFP National Championship presented by AT&T between the Georgia Bulldogs and the Alabama Crimson Tide at Mercedes-Benz Stadium on January 8, 2018 in Atlanta, Georgia. (Photo by Christian Petersen/Getty Images)

With Atlanta being one of the largest metropolitan areas in the country, there’s a running joke that the city is full and there’s no room at the Inn in the “A” to accommodate any newcomers eager to move to the Black mecca.

But it’s no laughing matter that the city, which is the capital in the Peach State, ranks number one among the top 10 worst cities with the greatest income disparity, according to a Bloomberg analysis.

While Atlanta has its pockets of extreme wealth with companies like Delta, and Coca Cola and many Fortune 500 companies calling it home, there are plenty of low-wage retail and hospitality jobs that contribute to the wealth gap. About one in four of its residents live in poverty or below the poverty level, according to the U.S. Census Bureau. That averages to about 24 percent of Atlantans.
According to the report, Atlanta beat out Miami which sat at the top spot for the past two years.

Turning the Tide on a Struggling City

Atlanta’s new Mayor Keisha Lance Bottoms is working to turn the tide. Fresh off of a contentious mayoral run-off election that pitted Black Atlantans versus white gentrifiers, progressives versus MAGA sympathizers, the haves against the have nots, Bottoms is tackling a laundry list of inequities that have turned Atlanta into the tale of two cities.

While luxury apartment buildings with sky-high rents crowd into what were historically Black neighborhoods, a decline in affordable housing stock has led to what the Federal Reserve Bank of Atlanta is calling a “crisis” after 22 percent of renters in Atlanta proper’s Fulton County received eviction notices in 2015.

At the same time, white Atlantans make, on average, $80,000 annually, compared to just $30,000 per year for the city’s Black dwellers and a whopping 80 percent of Atlanta’s African American children live in high-poverty neighborhoods, compared with just six percent of their white peers.

Lack of affordable housing, inequitable pay scales, and poverty rates affect every level of the city: crime rates rise, educational outcomes falter—Atlanta Public Schools graduates less than six in every 10 Black students—and Black residents, struggling to hold on to the glitzy promise of Black Atlanta, are forced to leave, as evidenced by the fact that between 2000 and 2015, the city’s Black population dropped from 61 percent to 53 percent, while the number of white residents rose from 33 percent to 40 percent in the same time period, according to Census figures.

Bottoms previously spoke with theGrio about an affordability plan.

“Part of it is an education process, we just aren’t dealing with people who are minimum wage employees, we’re dealing with people who are school teachers, police officers, postal workers, every day working folk who just cannot afford to live in our city. What I envision is similar to what we’ve done through the Atlanta Police Foundation,” she said.

“There’s a path to home ownership. Through a partnership with a local company that builds homes, police officers moved in, there’s a 15-year path from leasing to owning. This is not the model that you think about with housing projects because we’ve gotten away from that,” continued Bottoms.  “But we’d be making sure that people can own their homes and that in 15 years you aren’t being kicked out because the subsidies have run out. So really, it would be a generational change and teaching new homeowners how to care for their homes.”