The president called himself a "nationalist," but history has shown embracing nationalism from his perspective has caused extensive societal damage 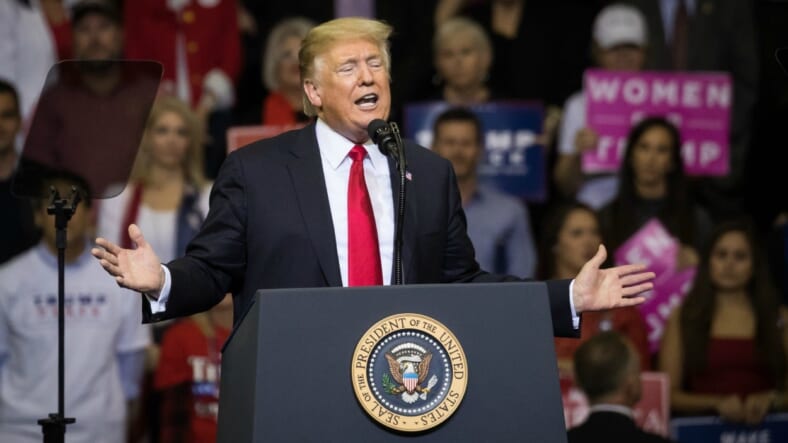 President Trump addresses the crowd during a rally in support of Sen. Ted Cruz (R-TX) on October 22, 2018 at the Toyota Center in Houston. (Photo by Loren Elliott/Getty Images)

This week, the President of the United States declared before a cheering crowd of mainly white fans in Houston that he was a nationalist.

“A globalist is a person that wants the globe to do well, frankly, not caring about our country so much. And you know what? We can’t have that,” Trump said. “You know, they have a word. It sort of became old-fashioned. It’s called a nationalist. And I say, really, we’re not supposed to use that word.

As with most things, Trump has the facts and origins of the word “nationalist” completely wrong. The word isn’t “old fashioned” as he declared but instead steeped in racism and xenophobia which is why people don’t casually use it as a means of self-identification.  Where the public often gets confused is with the difference between nationalism and patriotism.

Patriotism is love of one’s country. Nationalism according to Merriam Webster is “exalting one nation above all others” and placing primary emphasis on promotion of its culture and interests as opposed to those of other nations or supranational groups.

Eighty years ago, German nationalism and the belief that white “Aryans” were in fact superior to all other nations and peoples is what led to the rise of Nazism and Adolph Hitler.

Nazism professed:”Our future is Germany. Our today is Germany. And our past is Germany. Let us take a vow this evening, at every hour, in each day, to think of Germany, of the nation, of our German people.”

Anyone who was not considered to be Aryan or uphold these principals became a target and during World War II became victims of the Holocaust. Millions of Jews, Roma, and LGBTQ people were murdered because they didn’t fit the new mold that the Nazis and Hitler created.

Nationalism, which Donald Trump has just openly aligned himself with, is the belief that America is for Americans above all else.

Except our history has shown us — and the present-day reverberations of white nationalism exhibit — that there is only one group that has had explicit authority over defining what “American” is and should look like.  The individuals often given that power are white, male, straight, cis-gendered, “Christians.”

Everyone else, including the former president of the United States, Barack Obama must show proof of their Americanism. Trump was a major promoter of the birther movement—perhaps in his mind, making him the sole decider on who is considered American.

Journalist Jamal Khashoggi whose brutal murder has sparked international outrage was an American resident for many years, but in Trump’s eyes was not an American. Dreamers, the young people who were brought here to the United States at an early age and know no other country, are not considered Americans to Trumpers. Black people whose backs this country was literally built on, and who ask nothing more of this country than equality are demeaned and when NFL players dare to take a knee during the National Anthem are called un-American.

Many will also try to make the false equivocation as they usually do between white nationalism and Black pride. The reality is that white power and nationalism comes at the expense of Black lives. White nationalism has always been attached to domestic terrorism and violence against marginalized communities. The Black Power movement of the 60s and 70s wasn’t about creating terror against white people; but rather the need to lift of the beauty, grace, intelligence and brilliance of what it means to be unapologetically Black in a society that tells you you’re worthless and your life doesn’t matter.

Trump’s brand of nationalism is dangerous, it is violent. It is un-American.

The Trump administration seeks to maintain nationalism aka white supremacy by any means necessary. Trump’s nationalism comes in the form of his immigration policies, the Muslim ban, the wall, the prescription around narrowing the definition of gender, over policing of people of color, mandatory/minimum sentencing, calling dissenters a “liberal mob” just to name a few.

Trump’s “Us vs. Them” ideology is the foundation of white supremacy which is steeped white in paranoia and fear.

Maya Angelou once said, “when people show you who they are believe them the first time.” Trump and his Republican Party have showed us through their policies, their speeches, their willingness to use dog whistles and bullhorns to spread racism and gin up white anger in hopes of expanding their reign of terror exactly who they are and what they want.

Trump’s admission of his nationalism is a crime against democracy and the media’s handling of his widespread hatred is akin to aiding and abetting a domestic terrorist. The President of the United States has declared himself a nationalist—it’s time we start believing what he says and stop making excuses for his racism, xenophobia, transphobia, homophobia, and misogyny. Trump has showed us who is he is—it’s time we show him who we are.

Danielle Moodie-Mills is the host of the weekly political talk show #WokeAF on SiriusXM. She is also a regular commentator on MSNBC as well as a media maven and communications expert. Follow her musings @DeeTwoCents.