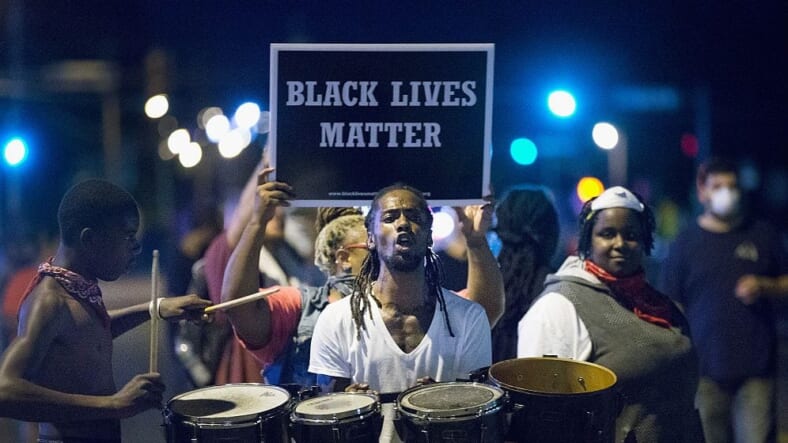 Ferguson activist Melissa McKinnies believes her son was killed as a result of a hate crime.

Earlier his month, McKinnies took to Facebook to share news of her son Danye Jones‘ death, and in a since-deleted post, she posted graphic images of the young man hanging from a tree.

While the original post may no longer be in circulation, the images have since been shared on social media. (WARNING: The graphic images are of a deceased person.)

“Every few months an activist from Ferguson losses their life or loved one,” wrote one supporter. “Oct 17th, a well known activist, Melissa (Missy) Mckinnies found her son hanging from a tree in her backyard. They are trying to rule it a suicide but it’s not that. Its not. She wants justice. #DanyeJones”

According to ColorLines, McKinnies was a former member of Ferguson grassroots activist group Lost Voices and participated in several protests in Ferguson following the death of Michael Brown.

Her son was 24 years old when she found him and would’ve turned 25 on November 19th. Jones’ death appears to be yet another tragedy in a string of suspicious Ferguson activist deaths that have occurred since 2014.

This is #DanyeJones. His mom, Melissa McKinnies, is a #Ferguson Activist.

Danye was found hanging from a tree in his mom’s backyard on 10/17. The police didn’t investigate, but called it a suicide.

But Danye has just bought property to sell & his mother knows this isn’t true. pic.twitter.com/BYkaDehz9X

— brittany packnett cunningham does not do remixes. (@MsPackyetti) October 31, 2018

According to Okayplayer, “DeAndre Joshua was found in his car with two gunshot wounds to the head the night of the Ferguson verdict in 2014. Two years later, Darren Seals was found dead with two gunshot wounds to the head in his car too. In both instances, the cars were set on fire. In 2017, Edward Crawford, the activist who became viral from an iconic Ferguson protest picture showing him grabbing an active tear gas canister fired from police and throwing the explosive back at them, was found shot to death in his car too. Police believe Crawford shot himself in the back seat of his car either in an attempted suicide or by accident.

Thank you. It is now not coincidental. There is a murderer targeting activists from #Ferguson. #WeAreNotInvisible #Resist https://t.co/cZV8VniCrO

The St. Louis County Medical Examiner’s Office responded to Rolling Out‘s inquiries about the matter with the following:

“1) The cause of death for Danye Jones has not been determined. It has not been ruled a suicide or a homicide. The investigation is still considered to be open.

2) The autopsy process is not complete, and currently toxicology tests are being run. The results can take up to six to eight weeks to be returned.

3) It is the policy not to release a cause of death or speculate until all required tests and results have been completed and reviewed by the chief medical examiner for St. Louis County.”