Natasha S. Alford   |
ATLANTA, GA - MAY 22: Georgia Democratic Gubernatorial candidate Stacey Abrams takes the stage to declare victory in the primary during an election night event on May 22, 2018 in Atlanta, Georgia. If elected, Abrams would become the first African American female governor in the state of Georgia. (Photo by Jessica McGowan/Getty Images)

The auditorium of Valdosta State University on Wednesday night was so packed, fire marshals started turning people away at the door.

“Is this the place where candidate Stacey Abrams is speaking,” a woman asked in a hurry, walking up to the door in the final minutes of the event.

“Sorry m’am, she’s wrapping up and there’s no more room to get in,” a police officer responded.

Stacey Abrams, the rockstar Democratic Georgia gubernatorial candidate, currently neck-and-neck with opponent and Secretary of State Brian Kemp, brought out 400 people in Valdosta in the final crucial days leading up to the election. This is just one part of an eight stop bus tour Abrams is making this week across the state.

Abrams excitedly roused the crowd of students and local voters on the same day explosives were sent to Democratic leaders across the country, creating fear and anxiety.

Just hours before, a judge also issued a temporary restraining order to stop absentee ballots from being tossed out over discrepancies like signatures in what can only be seen as a direct challenge to Kemp. A lawsuit has also been filed by American Civil Liberties Union arguing that voters were having their 14th amendment rights violated.

It’s all a part of the voter suppression drama playing out as the nation watches closely to see whether Abrams will pull off a win and become the first African-American woman governor in the nation’s history.

In an exclusive interview, theGrio caught up with Stacey Abrams just minutes after the rally to discuss her final push to get voters out to the polls, why she thinks she will win and the various controversies that continue to surround the race.

TheGrio: This race is neck-and-neck. The entire country is watching. Can you tell us where your head’s at right now?

Stacey Abrams: I’m thinking about the fact that we’re 13 days out…12 days out, and that we can win this election by turning out voters who aren’t expected to vote. Ayanna Pressley, my friend who’s in Massachusetts just won her election and said “You can’t poll transformation.”

And that’s what we think it’s going to take. Transforming the electorate, turning out young voters, voters of color, and those who were regretting the decisions they made in 2016. Really building a coalition that if we turn on enough voters, we will win the election.

TheGrio: When I touched down in Atlanta, the first thing I saw was your ad. Then I saw an attack ad that called you “radical, liberal, and extreme.” Do you think those attacks will work on undecided voters or do you believe, at this point, people know who you are?

Stacey Abrams: I mean look, we have about a 3 percent undecided population, which is extraordinarily low. People do know who I am, but the challenge is making sure they want to do something about the future. Part of my responsibility in this last stretch is to really emphasize what the difference is and then a choice is going to be made.

“People can either make the choice that is in the best interest of their family or they can stay home.”

People can either make the choice that is in the best interest of their family or they can stay home. And unfortunately, the voters who I meet technically do not show up because they don’t think that will matter in their lives. My responsibility is to get past the noise of what I’m being accused of and really focus on what I plan to do and talk to people about why this election can change our lives for the better.

TheGrio: You mentioned this culture and climate of fear. You talked about Brian Kemp, being really the face of voter suppression. By now, I’m sure you’ve heard about Jamil Smith’s Rolling Stone story exposing Kemp saying he was concerned about your voter turnout efforts. What was your reaction to that?

People who need access to healthcare. People who need good education for their kids. People who don’t want to work two jobs and want one good job. I’m the person for them. So, I need them to understand that he knows they can change this election. Prove him right. Let’s get it done.

TheGrio: Much has been made about you being possibly the first Black woman governor in history, which is a very big deal. At the same time, there’s often a scenario that as a Black women, we have to save the world and become the moral backbone of this country. What do you think about that narrative? 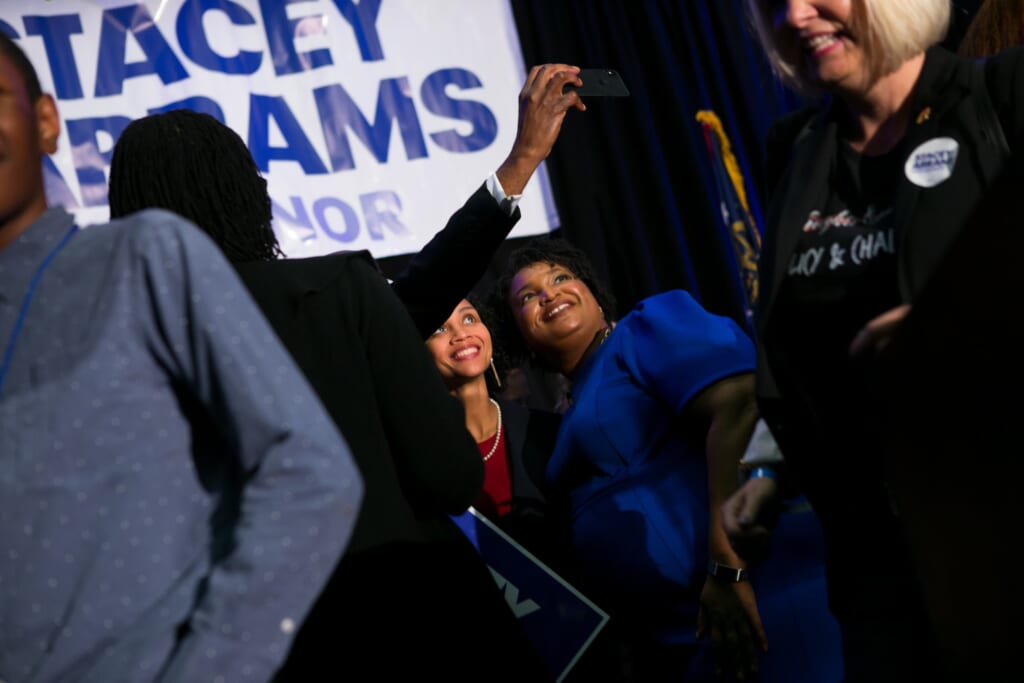 Georgia Democratic Gubernatorial candidate Stacey Abrams takes a selfie with a supporter during a primary election night event on May 22, 2018 in Atlanta, Georgia. If elected, Abrams would become the first African American female governor in the nation. (Photo by Jessica McGowan/Getty Images)

I‘m better because I’ve had those experiences and because I have the capacity to lead the state. As a Black woman, I’ve had to navigate things that most folks don’t even have to think about. That means I know where the problems are and I know where the traps are. I can lead everyone through them and gets us to better opportunity.

TheGrio: An aspect of your reputation is that you know how to reach across the aisle and really get things done. When you think about the time that you spent being the minority leader is there anything that you would change?

Stacey Abrams: No, part of the reason I want this job is that I know this is the time for it. It’s easy to be a leader when everyone is with you. It’s harder to lead when you have to navigate and negotiate, [but] that’s actually when you get the best results.

I’m the second of six kids and so, I had to negotiate a lot as a child. As a leader. I’ve had to negotiate and navigate complicated issues, but this only works if we can do this together because I’m thinking not just about now, but about a generation from now. 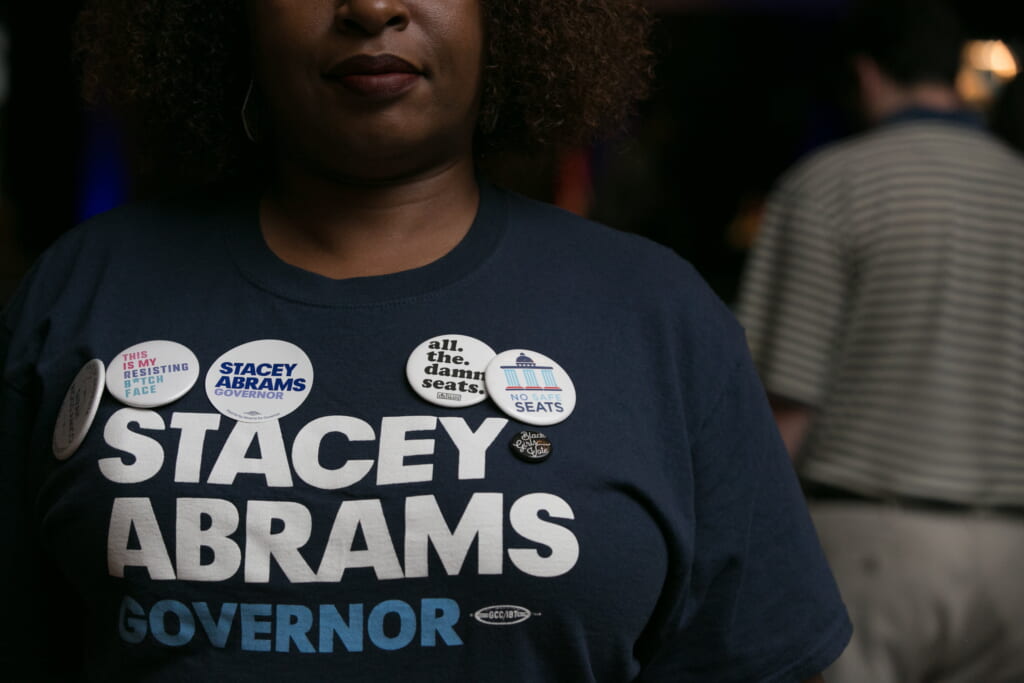 TheGrio: Many people who watched you in the debate on Tuesday night can identify with the sacrifices you made in taking care of your family and being there for your father when he was sick. Can you talk about how you tapped into that inner strength?

Stacey Abrams: I was raised by two people who loved us and raised us to be good people. There is nothing I wouldn’t do for my family and Georgia should want a governor who will protect families and who believes them. I’m willing to take a hit in public to do the right thing for my family. More importantly, I’m willing to do the right thing every day. I pay my taxes and take care of my responsibilities and I’m always going to fight for what’s right.

TheGrio: Thinking about Election Night 2018. If you win, how do you think your life will change?

Stacey Abrams: I get to take a nap [laughs]. Right after [I win] I get to start building that future that I talked about and start thinking about who can be in what positions so that we all reflect Georgia. How can we make certain that diversity isn’t just a code word? It’s in how we live and it’s how I’ve led. It’s why I have the most diverse team running this campaign. It’s why I’m ready to be governor of Georgia because I see all of our state and I understand that every community should have a voice.